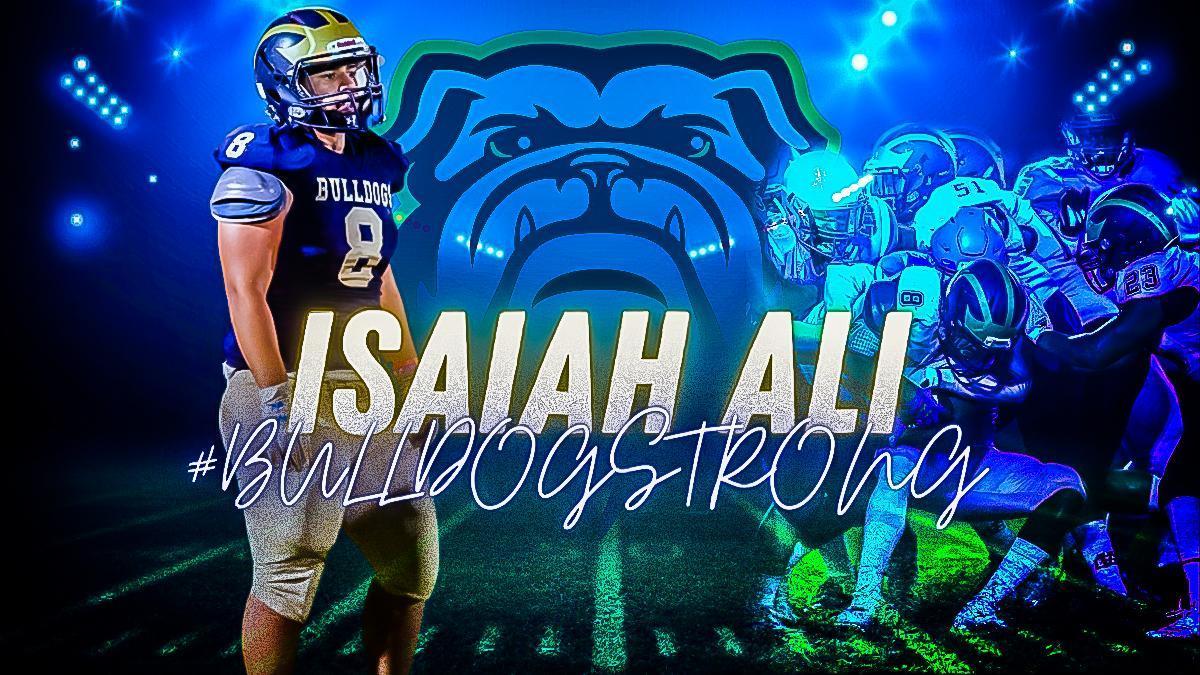 Plans After High School: Isaiah wants to SERVE the United States by joining the military in either the Marines or the Air Force.

What Makes Isaiah #BulldogSTRONG: In the modern era of sports, the perception of the modern athlete is of one that seeks the limelight of fame and fortune while being focused on what they can accomplish as an individual. However, at Golden Valley High School, athletes traverse down the path of sportsmanship and a selfless mindset, so that the team achievements supersede that of individual glory. One athlete that embodies the essence of the team over the individual is that of senior football player Isaiah Ali. and with his calm, humble, and tough approach, he has become a solid force for the Bulldogs as a linebacker and fullback. Never one to keep track of individual stats or accomplishments, Isaiah enjoys playing football at Golden Valley because of the camaraderie that he has established with his teammates. “I enjoy playing football with my teammates under the Friday night lights,” comments Isaiah, “But I also enjoy some of the other memories with the football team such as spending the weekend in Santa Maria with my teammates competing in the 7 on 7 Tournament and just hanging out with them.” Even with his attention focused on his team, Isaiah has had individual moments in the spotlight throughout his career as a Bulldog.

As a freshman, Isaiah was given the Coach’s Award for his commitment to putting the team first and always striving to do what is asked of him by coaches. As a sophomore on the JV team, Isaiah was selected as the Defensive Player of the Year for his toughness and grit. Last season, as a junior on Varsity, Isaiah demonstrated that the future is bright for the Bulldogs because of his positive contributions on the field. In a Week 3 game against South High School, Isaiah gained some tough yards, had some critical blocks, and made some crucial tackles to catapult the team to a victory over the Rebels - the first victory for the Bulldogs in over two years. In Week 10, Isaiah played his best defensive game against the West High Vikings as he set the edge frequently from his position at outside linebacker allowing his teammates to make tackles. His most memorable play against the Vikings was a crucial interception that switched the momentum of the game and allowed the Bulldogs to stay in a close game. For his junior season, Isaiah statistically had 67 tackles, 3 sacks, and 1 interception as an outside linebacker and 73 yards rushing and 40 yards receiving from his position at fullback. “The most rewarding aspect of playing football at Golden Valley is making memories that I will never forget,” humbly states Isaiah, “This school is so special to me because it’s like a second home to me.”  For his humility, toughness, and commitment to putting the success of the Golden Valley High School Football program over his individual accolades, Isaiah Ali is #BulldogSTRONG.

One of #8 Isaiah Ali's most memorable plays last season was a heads up interception against West High School.

What #BulldogSTRONG Means to Isaiah: "#BulldogSTRONG to me means leading by example and having integrity, which means doing the right things no matter who you think will judge you. ”

What Teachers and Staff Think of Isaiah:

“Isaiah Ali is a great example of what a student athlete is. A great young man who is a hard worker on and off the field. Like many of our students at GV, Isaiah is a student athlete that also maintains a full time job. But even with a full plate of responsibilities, he has been an impact player. In my first year, I sought students that would help me make the necessary changes for our program. As a junior, Isaiah took on a leadership role and did an amazing job for the team. Coming into this year, expectations for the program are high because of the young men like Isaiah.” James Cain, Head Varsity Football Coach, Golden Valley High School

"Isaiah Ali is one of my all-time favorite students.  He always has a smile and a kind word for me.  As a student in my class, Isaiah consistently offered help with equipment showing his dedication to be of service to others.  The world could use some more Isaiahs.” Catherine Balint-Karr, Physical Education Teacher, Golden Valley High School

“It has been my pleasure to be able to watch this young man grow up as a person and an athlete. When he is on the football field, he is a force to be reckoned with on either side of the ball. From running over opposing players to tackling them, Isaiah puts it all on the line. This year I have the pleasure of having him in my class and he is one of the few students that will interact with me at my Zoom meetings. I don’t really think he knows what that means to teachers right now. I wish the best for him in the future.” Robert Haskell, Athletic Director, Golden Valley High School

" Isaiah Ali is a kind young man who has tremendous GVHS Pride. He has shown growth, leadership, and service by helping his peers on campus. Isaiah’s positive attitude and willingness to learn was infectious in the classroom. He was constantly giving his full effort to reach his goals and settle for nothing less. Isaiah Ali is phenomenal prodigy of #BulldogSTRONG at GVHS!"  Bianca Castillo, Art Teacher, Golden Valley High School

“Isaiah Ali has done a great job being #BulldogSTRONG through his positive interactions in class, his coursework, and his attentiveness in class. Also, he has shown a lot of Growth this year he started a little slow but worked hard to raise his grade and if he continues to show growth and perseverance he can earn his way up to an A. Giving his best effort is something I have seen Isaiah is committed to in class.” John Hansen, Government Teacher and We The People Coach, Golden Valley High School