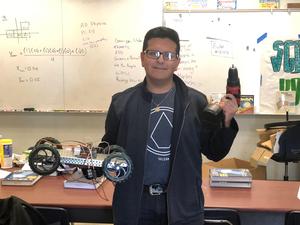 Admittedly shy and quiet as a freshman entering high school, Martin Ornelas has shown much GROWTH and PRIDE throughout his years as a Bulldog at Golden Valley High School making him #BulldogSTRONG.

Student: Martin Ornelas
Year in School: Senior
Plans After High School: Major in Mechanical Engineering and attend either Cal Poly San Luis Obispo or UC San Diego
GPS Focus: GROWTH and PRIDE
What Makes Martin #BulldogSTRONG: Coming to Golden Valley as a freshman in high school, Martin Ornelas was shy, quiet, and a little uncertain of what was in store. "I was unsure of myself as a 14 year old, but I was certain about is that Golden Valley was a great place," states Ornelas. Now in his senior year at GVHS, Ornelas has showed much GROWTH from the quiet freshman he once was. Academically, Ornelas is one of the top students in his class as he has accumulated a 4.250 GPA and along the way, passed both his AP English Language and AP US History Exams. As a 4 year student in GVHS's Project Lead the Way program, Ornelas has taken to science and engineering as evident in his capstone project that focused on safe and cost effective furniture for students in a classroom. Ornelas has also participated in Science Bowl as evident in his most recent participation in a county competition at CSUB. Where Ornelas has shown the most GROWTH as a student at GVHS in his ability to speak in front of others. This year, Ornelas was selected as a student presenter at Principal Partner's Day in which he spoke to community members across Kern County about his experiences at Golden Valley High School. Ornelas was also part of the We The People team that finished in 2nd Place in the 21st Congressional District - a team in which students prepare speeches about various constitutional issues. Perhaps most impressive, is Ornelas was selected to the Kern High School District Design Committee for the new high school being built on Panama Lane and Cottonwood and because of his project on educational furniture, Ornelas presented his findings to architects, school superintendents, and other professionals. Furthermore, because of his ability to communicate the needs of students, Ornelas will be one of the student voices on the GVHS WASC team. In addition to his various academic achievements, Ornelas has been a key member of the Bulldog eSports team that competes in the game League of Legends. One can find Ornelas under the summoner name of Boomstick1140 in League of Legends. Of all the accomplishments that Ornelas has, he never forgets those that have helped him along the way, especially Judiah Hopkins, a math and engineering teacher and the eSports Coach at Golden Valley High School. "Mr. Hopkins is my mentor and I truly appreciate everything that he has done for me as a Bulldog," states an appreciative Ornelas. Through GROWTH and PRIDE, Martin Ornelas is #BulldogSTRONG.
What #BulldogSTRONG Means to Martin: "Being #BulldogSTRONG means being willing to help others that are in need. I tend to get pretty good grades and with that, I stay after school to help tutor other students and provide support so that they are successful in their classes. Helping others is extremely important in being #BulldogSTRONG."
What Teachers Think of Martin:
"I have had the pleasure this year to work with Martin for four periods each day. Martin has a passion for learning. Martin is currently in my Engineering Design and Development, Precalculus, and AP Physics courses. Last year, he founded the eSports team, and this year became captain for the varsity team. So far we are undefeated this year. Additionally, he leads our Science Bowl team, where he recruits, prepares, and runs our practices. Currently, Martin is redesigning and innovating the student chair for his yearlong engineering project, hoping to make a seat that is more comfortable and inclusive for more body types. For fun, he is currently making a small wind tunnel to study aerodynamics. And if that wasn’t enough, Martin is helping to create Golden Valley’s first ever Rowdy Cart. Mr. Helman nominated Martin to be one of three students that are helping to design the new high school. Martin exemplifies #BulldogSTRONG. He is one of the best minds that Golden Valley has produced, and it has been an absolute pleasure getting to know Martin over the last two years." - Judiah Hopkins, Math & Engineering Teacher, eSports Coach, Golden Valley High School.
"As a participant on the committee to design the new high school, Martin uses the information gained in his Golden Valley engineering classes to positively contribute to each meeting. Martin is quick to give valuable input and has given a professional presentation to the committee. He demonstrates pride in being a Bulldog and has shown considerable growth over his four years at GV. Martin walks #BulldogSTRONG!" - Paul Helman, Principal, Golden Valley High School
Print