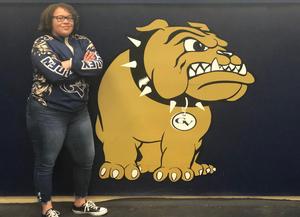 The first few years at Golden Valley High School for Macy Bullard were met with much frustration and difficulty as she was often in trouble, struggling to find her identity as a Bulldog. However, through much GROWTH and her participation in wrestling, Macy Bullard has become #BulldogSTRONG.

Student: Macy Bullard
Year in School: Senior
Plans After High School: Attend a junior college and wrestle or attend Bakersfield College to her AA in Psychology with the goal to become a Marriage and Family Therapist.
GPS Focus: GROWTH
What Makes Macy #BulldogSTRONG: The first few years at Golden Valley High School for Macy Bullard were met with much frustration and difficulty as she was often in trouble, struggling to find her identity as a Bulldog. After her freshmen year, Bullard attended a different high school for a year, but came back her junior year with a new sense of purpose and a positive outlook on life and the way she handled herself. It became apparent to teachers, staff, and other students that Bullard had demonstrated much GROWTH in the way that she conducted herself. Part of Bullard's GROWTH was in her participation in wrestling as it provided her with much confidence and discipline. As a junior, Bullard placed 4th in the CIF Central Section Masters for her weight class, just barely missing qualifying for the state tournament. However, Bullard was driven to achieve more. This year, Bullard established herself as one of the top wrestlers in Kern County and in the state as evident in her many accomplishments: South Yosemite League Champion, 3rd Place Finisher in the CIF Central Section Masters for her weight division, and she qualified for the prestigious CIF State Tournament at Rabobank Arena. Moreover, Bullard was an essential piece of the Golden Valley Girls Wrestling program that won the CIF Central Section Masters team title. In the off seasons Bullard continued to wrestle freestyle in order to keep her skills sharp and stay out of trouble. Beyond her athletic success, Bullard has shown much GROWTH in her academics as well. For her part, Bullard attained the Honor Roll through a 3.57 GPA during her 1st semester as a senior, increasing her overall high school GPA to 3.00. Bullard has also stayed out of trouble in the classroom and on campus with a focus on academic and athletic success. She has come a long way since her freshman year struggles, but students and staff agree that through her GROWTH, Macy Bullard is indeed, #BulldogSTRONG. Through tremendous GROWTH, Macy Bullard became a wrestler that was #BulldogSTRONG (Photo by Nick Ellis and provided by Kern High Network)
What #BulldogSTRONG Means to Macy: "#BulldogSTRONG means to show perseverance no matter what the circumstance is. It also means that you can conquer any obstacle that comes your way. Golden Valley has taught me to work through failure and always give 100%. My first few years were tough, but I am glad that I am graduating a Bulldog."
What Teachers Think of Macy:
"Macy Bullard is simply one of the most amazing stories of student GROWTH that I have ever experienced as teacher. During her freshman and sophomore years, Macy was faced with so many difficult challenges that I was worried that this extremely bright individual would not have a successful high school experience. Then something changed. Somewhere along the way, Macy flipped the switch. All of a sudden, she could overcome any obstacle. She put in effort in all of her classes and soon became a star student in her classes. She also found wrestling and became one of the top wrestlers in the state. She transcended being just a good student, to being a student that was inspirational to those around her. She did this with all of this with a grace and humbleness that belies her age. She embodies GROWTH, PRIDE, and SERVICE in all that she does, and I am honored to have been one of her teachers." - Darren Buckey,Teacher, Golden Valley High School
"Macy exemplifies the idea of what it means to be a student-athlete. She’s fully aware the 'athlete' part cannot flourish without the 'student' aspect. She works very hard to stay on top of her grades, is so helpful to her peers in class and is one of the top athletes of the school. She is the definition of #BulldogSTRONG. " - Allison Filbin, Teacher, Golden Valley High School
"Macy Bullard epitomizes #BulldogSTRONG by showing GROWTH in all she does. In her first year at GVHS, she had some obstacles which brought her to the office at times. She has shown tremendous resilience in overcoming these obstacles to the point that the Macy Bullard I knew when she was as a Freshman is night and day from Macy Bullard I now know as a Senior. She recently qualified for the CIF State Finals in Girls’ Wrestling which is a major accomplishment. I am proud of the GROWTH she has exhibited at Golden Valley and am looking forward to what she will continue to bring to our community." - Pablo Reyes, Dean of Students, Golden Valley High School
Print