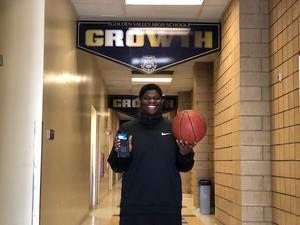 Derick Boye is #BulldogSTRONG as he cherishes opportunities to GROW, takes PRIDE in being a Bulldog, and in treating everyone that meets him with the utmost kindness, he demonstrates what SERVICE is all about at Golden Valley High School. Student: Derick Boye
Year in School: Senior
Plans After High School: Attend either California State University, Northridge or University of California, Merced and Major in Mathematics. Eventually would like to be a high school math teacher and coach basketball.
GPS Focus: GROWTH, PRIDE, & SERVICE
What Makes Derick #BulldogSTRONG: Derick Boye was excited to attend Golden Valley High School as a freshman because his older cousins attended GV and he couldn't wait to be a Bulldog. However, the first few years at Golden Valley High School were a bit of transition as Boye was trying to find his place as a Bulldog and adjust to the rigors of academic life in the high school setting. In spring of his freshman year, Boye decided to try out for the golf team and for the past four years, he has been an anchor for the Bulldogs as he has modeled consistency, coachability, and commitment. After finding success and confidence on the golf course, Boye decided that he would try out for the basketball team as hoops was his first love. For three years, Boye has been a Bulldog basketball fixture with his positive energy, dedication to his teammates, and the relentless work ethic that he possesses. But basketball became so much for Boye as he learned some valuable life lessons in the process. "In my junior year my basketball coaches encouraged the team to improve each and every day," states Boye, "They also encouraged us to be the best versions of ourselves and do what is best for our families. This year, my coaches were committed to those same values and have helped me achieve great success on and off the court." As a result of the lessons learned in basketball, Boye applied those principles to his academics and he began to flourish. A student that was once receiving largely B's and C's was now earning mostly A's in college prep and honors classes, raising his overall GPA to about a 3.5. Boye is motivated to be the best version of himself, but he also wants to help his family. "I am motivated to do well with my grades because I want to help my family out in the future by providing financial stability," states a selfless Boye. In addition to athletics, Boye serves as president to the Golden Valley chapter of Project BEST and is a member of the Computer Science Club. Moreover, when the Golden Valley athletic department had a critical need requiring assistance, Boye volunteered his time to serve as the spotter for the public address announcer at football games - a thankless and extremely important job. Boye gives back to Golden Valley because the school community has done so much for his success as a Bulldog. "What I cherish about the Golden Valley community," states Boye, "is that they put time and energy into making all student successful." Derick Boye is #BulldogSTRONG as he cherishes opportunities to GROW, takes PRIDE in being a Bulldog, and in treating everyone that meets him with the utmost kindness, he demonstrates what SERVICE is all about at Golden Valley High School. For four years, Derick Boye has been the model of consistency and stability for the Golden Valley Golf Team. (Photo taken by Javier Valdes of the Kern High Network)
What #BulldogSTRONG Means to Derick: "Being #BulldogSTRONG means that you should never give up when challenges come your way. It also means that you have to stay determined when failure comes your way. Failure isn't a bad thing and in fact, it has allowed me to learn from my mistakes. Furthermore, being #BulldogSTRONG means that you are proud of being a Bulldog."
What Teachers Think of Derick:
"Derick is one of the hardest working students I have ever had. He is consistently taking care of his grade and his work, even turning in major assignments early, which is uncommon. When I coached basketball, he was one of the hardest working players out there. Often, he would want to spend extra time trying to get better. It is a coach’s dream to have players who have this mindset, and I wish I had more that were as humble and hard working as he is." - David Gago, Math Teacher, Golden Valley High School
"Derick Boye is the kind of person that does his best to overcome obstacles in life and at school. He tries hard to achieve his best and always comes to school with a smile even on the tough days. Derick is also the type of person that strives to be a lifelong learner. He asks questions in class, participates in the reading and engages with the lesson material in a way that you would wish all your student would. " - Daniel Taylor, Teacher, Golden Valley High School
"Derick Boye is a prime example of 'GPS.' This senior has shown GROWTH throughout his years here at Golden Valley. He has gone from shy, awkward, freshman to confident, athletic senior. His PRIDE is displayed every time he puts on his basketball or golf uniform that sport the letters GV. Derick shows SERVICE with his commitment to learning. He comes to school daily, has a 3.45 GPA, and always supports his teammates. Derick Boye is #Bulldog Strong." - John Alvarez, Teacher and Boys Golf Coach, Golden Valley High School
"Derick is a fantastic student athlete that every coach would welcome to be part of their program. Derick has extremely high character beyond his years and this year, developed a mentality of being a role model for the rest of his teammate and the program at large. Derick maintains a high work ethic on and off the court, inspiring his teammates and other students." Jayson Heard, Head Basketball Coach, Golden Valley High School
Print