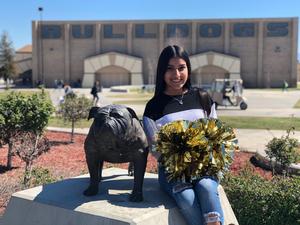 2 years ago, Dhayanna Ramos moved to Bakersfield from Lima, Peru not knowing the English language. Today, through much GROWTH and PRIDE, Dhayanna has achieved much academic success, is proficient in English, and has involved herself in the culture at Golden Valley High School. For her part, Dhayanna Ramos is inspirational and #BulldogSTRONG.

Student: Dhayanna Ramos
Year in School: Senior
Plans After High School: Attend Bakersfield College and earn her Associates of Arts Degree in Spanish and then go to a University of California and earn her Bachelor of Arts Degree in Spanish. Would like to eventually teach Spanish Language and Literature to high school or college students.
GPS Focus: GROWTH and PRIDE
What Makes Dhayanna #BulldogSTRONG: At the age of 15, Dhayanna Ramos and her family moved to Bakersfield, CA from Lima, Peru with aspirations of having a better life. However, the move to a new country brought about some anxiety and nerves to Dhayanna as she knew very little to almost no English. "I had a very basic understanding of English. I was extremely nervous, especially with regards to high school because my thoughts of American schools were like the movies," laughs Dhayanna, "I thought there would be the popular girls in one group and athletes in another just like you see in Hollywood." Dhayanna was a successful student academically in Peru as she received mostly A's and B's for her classes. However, her confidence in speaking English was a barrier to her new experiences in the United States. Timid, shy, and anxious on her first day at Golden Valley High School, Dhayanna went to her classes, trying to navigate through teenage life in public school system in America. Despite such fear, Dhayanna found strength and support in her teachers. It was the efforts of teachers that made Dhayanna feel welcome while also instilling confidence in her to achieve greatness. Elvira Mota was Dhayanna's ELD 1 teacher and throughout the year, she helped her achieve the confidence to speak and understand English. Monica Beavers, an English and Performing Arts teacher at GVHS, provided her additional support in order to speak English and would not allow her to speak Spanish as she was learning and struggling with a new language. With the confidence and support of her teachers, Dhayanna finished the year with a 3.83 GPA and earned a score of a 5 on the AP Spanish Language test. Despite such academic success after her junior year, this year, Dhayanna wanted more out of her high school experience, so she tried out for the cheer squad and made the team. Her positive attitude was infectious for her teammates each and every time that she cheered. In addition to joining the cheer team, Dhayanna also joined the Migrant Speech and Debate program at Golden Valley High School to further improve her confidence in speaking in front of others. For her efforts, Dhayanna won the Regional Migrant Speech and Debate competition this past February that took place at Sierra Middle School. Her four minute speech, of which was presented in Spanish, was about the need for free public education in the United States at both the high school and collegiate levels. As a result of her 1st place finish, Dhayanna will compete at the State Migrant Speech and Debate competition in Ventura at the beginning of May. From a shy and timid girl from Peru, Dhayanna Ramos has shown much GROWTH in her two years in the United States and at Golden Valley High School and takes PRIDE in her academics and involvement as a Bulldog making her #BulldogSTRONG.
What #BulldogSTRONG Means to Dhayanna: "Being #BulldogSTRONG means that you can overcome any obstacle that comes your way because they aren't as hard as you think. It also means that you can be better each and every day. #BulldogSTRONG means that you have to fight for your dreams and work hard and that you can do anything that you want as long as you have positive thinking. The future is now and you have to strive to be the best version of yourself each and every day."
What Teachers Think of Dhayanna:
"How do you spell #BuldogSTRONG? D-H-A-Y-A-N-N-A. Dhayanna is a perfect example of embodying all three aspects of GPS, Growth, Pride, and Service. Dhayanna has not stopped growing and serving since she arrived at GV. She has tackled every challenge that came her way; she is a very determined young lady with a passion to succeed. She has conquered the English language by mastering levels, participated in community events, rallied school pride as a cheerleader, mentored the young and the restless, volunteered as a tutor during after-school classes and is now looking forward to more growth and service at a higher learning institution. I am so proud to have been one of her instructors and I will always “bark” about her accomplishments at GV." - Elvira Mota, ELD Teacher, Golden Valley High School
"Dhayanna is one the most inquisitive students in the Spanish Literature AP class. Her perspicacity regarding literature often leads to insightful class discussions and observations that help more reserved students to understand a verse in a poem or a passage in a novel. She is an invaluable asset to our class and her friendly and welcoming demeanor have earned her the respect of her peers." - Gabriel Flores, Spanish Teacher, Golden Valley High School
"Dhayana is an incredible bright young lady that loves to be challenged and its not afraid of any obstacle that comes her way. She’s dedicated, strong, humble, helpful and responsible. She’s an extraordinary Bulldog!" - Yaneli Bravo-Ceja, Spanish Teacher, Golden Valley High School
"Dhayanna is an inspiration to other students. Her strong work ethic and the effort she puts forth is contagious! She is truly #Bulldog STRONG!" - Jane Hurttgam, Title 1 Coordinator, Golden Valley High School
Print