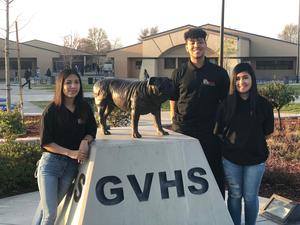 As vaping devices, marijuana, and tobacco products have plagued high schools campuses across Kern County and the state of California, three Golden Valley students are working hard to combat these drug issues. Amrariun Tyiska, Vivianna Patino, and Maria Gonzalez Reyes are #BulldogSTRONG because of their commitment to SERVE their school and community. With the passage of Proposition 64 in 2016, marijuana was legalized for recreational use for adults over 21 in the state of California. However, with its implementation, the increase of availability, use, distribution and amount of vaping devices that are available, Proposition 64 has negatively impacted high school campuses across Kern County and in the state of California. In order to combat these issues facing schools, some students from Golden Valley High School have taken an active role in the fight against marijuana, vaping devices, and tobacco in schools and in the community. Amariun Tyiska, Vivianna Patino, and Maria Gonzales Reyes are active members of S.W.A.T. (Students Working Against Tobacco) a program that is led by the Public Health Department and Kern County Superintendent of Schools. The program seeks to fight the fight against not only tobacco, but marijuana and vaping as well. Students get educated, trained, and made aware of local policies and trends of smoking/vaping devices and e-juices that have become an epidemic among our youth. Amariun, Vivianna, and Maria have not only used their voices to educate other youth participants on the harmful effects of smoking/vaping, they also took lead in facilitating a workshop at the Leaders in Life Youth Conference where more then 2,000 students from all around Kern County were educated on the compounds found in e-cigarette aerosol and BIG Tobacco's manipulative marketing strategies, as well as our county's efforts in establishing buffer zones. On Sunday, March 17, 2019, these three students gathered in Sacramento at the state capitol building to educate lawmakers on the epidemic our county/schools are facing regarding e-cigarettes/vape pens and other tobacco products. Among those they presented to were Rudy Salas and Vince Fong, local legislators that represent Kern County. Amariun, Vivianna, and Maria met with Congressman Rudy Salas in Sacramento about the growing issue of tobacco, vaping, and marijuana use in Kern County and California.

With such commitment to SERVICE to combat this growing county and statewide issue, each student brings a unique story as to their involvement with S.W.A.T. Amariun noticed the impact that marijuana had on his community and that there was not much change happening. He knew that he had a calling to make a change and decided, whether big or small, he would do his part to fight the marijuana problem. As a freshman, Amariun helped created a video public service announcement for the Kern County Superintendent of Schools to encourage students to avoid tobacco and drug use. Vivianna was drawn to make a change because of the impact marijuana and vaping has on human health. Vivianna learned that one cigarettes could cost a person 11 minutes of their life and smoking one vape pipe is like smoking 1-2 cartons of cigarettes. This staggering data made her realize the public health risk of tobacco, vape, and marijuana use. For Maria, her involvement is more personal. Her dad was a longtime smoker and because of his habit, her little brother was diagnosed with asthma at an early age. As a result of her involvement with S.W.A.T. and her leadership in combating tobacco and marijuana, Maria's dad quit smoking and is living a much healthier lifestyle. With their commitment to being positive citizens and making positive contributions, Amariun, Vivianna, and Maria are #BulldogSTRONG.
As a freshman, Amariun Tysika starred in a PSA for the Kern County Superintendent of Schools that focused on the ill effects of cigarette use by teenagers. Maria, Vivianna, and Amariun presenting to a large group of students at the Leaders in Life Conference on the dangers of marijuana, tobacco, and vaping use.
What #BulldogSTRONG Means to Amariun: "#BulldogSTRONG is being the best person you can be in your community and school. Being #BulldogSTRIBG isn’t just about helping others or having school spirit it’s more than that I believe it’s also about having a positive mindset. With our encouraging staff and students I am able to be building strong in my community and happy at my school."
What #BulldogSTRONG Means to Vivianna: "Being #BulldogSTRONG means doing things to better the community. It means to come up with ways to better our future while also finding ways to better ourselves in the present. It means always giving 100%."
What #BulldogSTRONG Means to Maria: "Being #BulldogSTRONG means, that as students, we take PRIDE in our school and we SERVE the community. It means being the best versions of ourselves in order to make the world a better place."
What Teachers Think of S.W.A.T. Members:
"Amariun Tyiska demonstrates an enthusiasm for learning and a desire to experience learning in new and unique settings. He challenges himself and pushes the academic envelope. His people skills make him a great addition to our Mock Trial team. He is a great team player and a thoughtful young man." - Terri Richmond, History Teacher and Department Chair, Golden Valley High School
"Both Vivianna and Amariun are excellent examples of what it means to be #bulldogSTRONG. They are incredibly dedicated to serving the GVHS community and community at large through their work with leadership and community programs like SWAT. They are thoughtful, confident young adults who contribute to my classes in many ways. Whether it is by offering their understanding or analysis of a text or topic during a Socratic Seminar or small group discussion, or presenting a compelling argument in a writing assignment, they both offer unique perspectives and insights that help to elevate the conversation and thinking in the room." - Karen Bastain, AP English Teacher, Golden Valley High School
"Maria has been involved with leaders in life (and is going to be the secretary next year) for a couple of years now, and from that she got involved with SWAT. She is an outstanding student with the number of things she is involved in. she is part of the Avid club and currently serves as president. In addition she is also a part of choir, drama and mock trial. Maria also takes rigorous courses, AP Euro, GATE English and GATE Bio, and GATE Advanced Algebra. She loves the stage as she recently landed a part in the upcoming musical for Once on this Island. Maria is a wonderful example of showing pride on our campus through her involvement with the number of clubs and classes offered at GVHS." - Jennifer Yamauchi, Biology Teacher and Department Chair, Golden Valley High School
Print