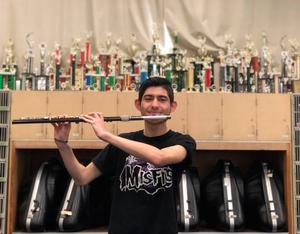 Robert Trevino takes PRIDE in being one of the top flute performers in Kern County and the best ever at Golden Valley High School. He has also shown much academic GROWTH as a Bulldog as he has overcome some medical issues. Robert Trevino is #BulldogSTRONG. Student: Robert Trevino
Year in School: Senior
Plans After High School: Attending Bakersfield College for 2 years, but wants to transfer to The Juilliard School (dream school) or California State University of Long Beach to obtain his Bachelor of Arts Degree in Flute Performance
GPS Focus: GROWTH and PRIDE
What Makes Robert #BulldogSTRONG: Since his days as a 5th grader attending Hort Elementary School, Robert Trevino has had a passion for instrumental music. Robert was initially interested in playing the cello, but as a beginner, the instrument was simply too big and so he decided to take to the flute instead. Little did Robert know that the change would bring him much success, passion, and PRIDE as he has established himself as one of the top flute players in Kern County and his accomplishments as a Golden Valley student seem to be endless. At Golden Valley, Robert is 1st chair/section leader with the Advanced Band and with his talents, he auditioned and earned a spot in the Bakersfield Youth Symphony Orchestra where he received Principal (1st chair) in this elite group. This is the first time that any student at Golden Valley has received such an honor and for his efforts, he beat out college students across town to capture this elite position. Because of his placement in the Bakersfield Youth Symphony Orchestra, Robert went on tour to Japan displaying his talents with the flute to the Japanese. Again, Robert became the first student to represent Golden Valley in this capacity. This spring, at the California Music Educators Association (CMEA) Solo and Ensemble Festival at Bakersfield College, Robert performed a flute solo and received a COMMAND performance, meaning that out of all of the flute solos the judges heard that day, Robert's performance was the best. Again, Robert has become the first student at Golden Valley to get a Command Performance because of his abilities on the flute. In addition to all of his accomplishments, Robert won the Bakersfield Youth Symphony Orchestra concerto competition and will be performing his piece, Carmen Fantasie with the symphony in June. Inspired by the likes of Tracy Harris and James Galway, Robert has aspirations of being a full time flute player in a major symphony. Robert prefers the French Romantic or Classical genres as they offer a very unique and interesting style for the flute. "I am so glad that I chose the flute over the cello," states Robert, "It has been a perfect match for me." During Spring Break, Robert Trevino toured with the Bakersfield Youth Symphony Orchestra in Japan. Trevino is one of the top flute players in Kern County.
Beyond his passion and PRIDE for the flute, Robert has seen tremendous GROWTH in his academics. During his freshman and sophomore years at Golden Valley, Robert struggled academically because he was also struggling with his health as spent a lot of time in and out of the hospital. "My grades struggled as my health was struggling," explains Robert, "Once I was able to manage my health, my grades vastly improved." As a junior, Robert received A's in almost all of his classes except for two and this year, it has been straight A's and his GPA has increased to a 3.420 overall while largely taking College Prep and Advanced Placement classes. Robert dreams of going to The Juilliard School in New York, but for the next two years, he will attend Bakersfield College and perform as a Renegade. After that, if The Juilliard School doesn't work out, Robert plans to attend California State University of Long Beach and obtain his Bachelor of Arts Degree in Flute Performance. For the PRIDE he takes in flute performance and for the academic GROWTH he has shown the past two years, Robert Trevino is #BulldogSTRONG.
At the California Music Educators Association (CMEA) Solo and Ensemble Festival at Bakersfield College, Robert Trevino performed a flute solo and received a COMMAND Performance.
What #BulldogSTRONG Means to Robert: "Being #BulldogSTRONG means that we should be positive role models for the younger generation of Golden Valley students. #BulldogSTRONG also means that we all need to find out what we are passionate about and give it our 100% effort, working through failure along the way."
What Teachers Think of Robert:
"Robert is the definition of BulldogSTRONG. He has been through a lot during his high school career and he has shown tremendous GROWTH with not only being a musician, but being a good person as well. He has PRIDE in his musical abilities and helps others around him play at the next level. He has done a great SERVICE to not only the GV music program but also to the Bakersfield Youth Symphony Orchestra, and the Cal State Bakersfield Community Band which he also participates in. I couldn’t be more proud of all that he has accomplished these last four years. It has been an honor and absolute pleasure to be his Band Director. He will do great things, I can’t wait to see what the future holds for him!" - Kristen Torres, Band Director, Golden Valley High School
"Robert is a wonderful young man who goes out of his way to help those students out around him that are struggling. He is always positive, kind, and compassionate. Robert is an extremely talented musician and natural mathematician." - Judiah Hopkins, Physics Teacher, Golden Valley High School
"Robert is consistently involved in activities, and always shows school spirit and PRIDE on campus. He is the rare student who finds it natural and easy to talk to all classmates, making him a great addition to my classroom. He never ceases to stop striving for great quality in his classwork, no matter the task. His PRIDE shows all that no task, opportunity, or interaction is too small to continually strive for greatness. " - Madison Bush, English Teacher, Golden Valley High School
Print