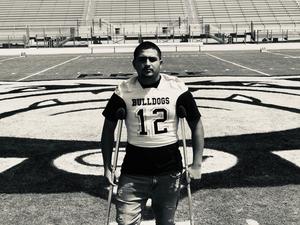 Throughout much of his football career, Vicente Alatorre has been met with one obstacle after another. His ability to demonstrate GROWTH by overcoming those obstacles, makes him #BulldogSTRONG.

Plans After High School: Attend Bakersfield College and play football or work on an oil rig with his older brother.

What Makes Vicente #BulldogSTRONG: Perhaps one of the most important aspects of being #BulldogSTRONG at Golden Valley High School is the ability to demonstrate GROWTH by overcoming obstacles that present themselves. Such is the case for Vicente Alatorre as he demonstrated a toughness through his ability to overcome the obstacles that have come in his life, especially on the gridiron. All his life, Vicente has been fascinated with the sport of football, so he took to playing youth football with the Golden Empire Youth Football team, the Talons. “I love football,” states Vicente, “It allows me to part of something bigger than myself.” One aspect of his game that Vicente has always been known for is his toughness and ability to make tackles all over the football field. In his 8th grade year, a major obstacle came Vicente’s way that would forever shape the direction of his life. In just the second game, Vicente, who was playing outside linebacker at the time, planted to make a tackle and his left knee gave out as he tore his anterior cruciate ligament (ACL), the major stabilizing section of the knee, which ended his season instantly. The sheer pain of the injury, coupled with the pain of not being able to play, did not deter Vicente from making a comeback to get back on the gridiron. Through the agonizing work of rehabilitation, Vicente was fully cleared as he entered his freshman year at Golden Valley High School and as a freshman, Vicente was called on to play quarterback, in addition to his duties as an outside linebacker, as the Bulldog coaching staff appreciated his bruising style of running the ball and his toughness on the defensive side. For his part, Vicente accumulated 6 rushing touchdowns and over 700 yards rushing, setting the tone of toughness for the Bulldogs. However, after his first season of success, Vicente was faced with another obstacle. In the summer before his sophomore season, during a passing league game, Vicente was running to make a play and tag the opposing receiver to end the play, but when he planted his foot, the same left knee over rotated and again his ACL was torn causing him to miss his entire sophomore season. This time, embryonic stem cells were used to replace the torn ligament to hopefully allow Vicente to play football again. Through resolve, toughness, and the encouragement from his friends, family, and support systems at Golden Valley, Vicente was able to come back, fully cleared to play for his junior year.

Vicente Alatorre, during his junior year and playing in his first game back since tearing his ACL for the second time. (Photo by David Dennis)

As a junior, Vicente was one of the bright spots in very tough season. At quarterback, Vicente threw for 2 touchdowns and rushed for another, but his presence was felt on defense at the linebacker position in which accumulated 82 tackles and 9 sacks in just 8 games. Despite such success, Vicente would be faced with another obstacle during that same junior year. With the frustration of a season in which winning was absent, Vicente took to behavior that forced him to sit out the last two games of the season. However, being the loyal and trustworthy teammate that he is, Vicente never left his team as he found a spot in the bleachers to cheer on his teammates when he couldn’t be on the sidelines. In the offseason, as Golden Valley underwent another coaching change, Vicente committed himself to his teammates, coaches, and schools as a leader on and off the field. For his part, Vicente rarely missed offseason workouts and practices as he took to truly leading his teammates by his actions. During the offseason, Vicente Alatorre committed himself to leadership as he became captain of the Golden Valley Bulldogs.

However, with the GROWTH he displayed in the offseason, through his commitment to leadership, Vicente was faced with yet another obstacle. Last Friday, after a twelve yard gain on the ground from his position at quarterback, an opposing player landed on Vicente and he dislocated his right hip. Initial doctor’s reports indicate that Vicente could miss up to 6 weeks. However, what doctors probably do not know is that Vicente is #BulldogSTRONG. Teammates are dedicating every game and play that Vicente misses until their leader and heart of toughness returns. Vicente knows that he can overcome this obstacle because of the support he has at Golden Valley. “Golden Valley is home for me,” states Vicente, “I have made some mistakes, but no one has given up on me. I really appreciate the teachers and staff that have not given up on me. I won’t give up on them.” Vicente Alattore hopes to play at least one or two games this year and we all believe that he can because he is #BulldogSTRONG.

In his first play on defense against Arvin High School in last week's scrimmage, Vicente Alatrorre had a sack for the Bulldogs.

What Teachers/Staff Think of Vicente:

“Vicente Alatorre is a leader. From the first day I met him I immediately could tell he was the kind of kid that could help me turn this football program around. Vicente is smart, hard working, and loves to compete. He has the qualities needed to be successful in whatever he chooses to do with his life. I am proud to be his coach and expect nothing but great things from Vicente Alatorre.” James Cain, Head Football Coach, Golden Valley High School

“Vicente has grown over the last four years into a great team leader on and off the field. He is always looking for ways to make himself and his teammates better. He is one of those athletes that every coach wants to have on their team because no matter what, he is going to give his all.” Robert Haskell, Athletic Director, Golden Valley High School

“Vicente Alatorre is a wonderful representation of what it means to be #Bulldogstrong. Vicente continued to push himself as an art student thinking outside of the box when it came to creating new projects. He was a leader in the classroom and was always there to help assist others. Vicente is a very respectful young man and I know he will continue to do great things for himself and his community.” Bianca Castillo, Art Teacher, Golden Valley High School

“Vicente Alatorre has shown so much GROWTH over the past year as a leader on the football team. His ability to overcome obstacles inspires me to never give up and work hard at whatever I do. My hope is that Vicente will get the chance to play football once again and show Kern County what it means to be #BulldogSTRONG.” Kyle Wylie, Assistant Principal of Administration, Golden Valley High School