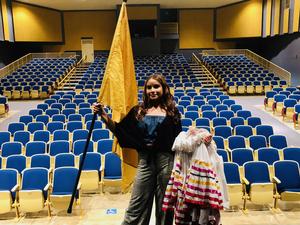 Itzel Delgadillo has shown much GROWTH and PRIDE in her passion for Folklorico and color guard. However, it is her commitment to SERVICE of others that truly makes her #BulldogSTRONG. Plans After High School: Wants to attend the Fashion Institute of Design and Merchandising (FIDM) and eventually create her own clothing company that donates some of the profits to assist 3rd world countries.

What Makes Itzel #BulldogSTRONG: Since she was a little girl, Itzel Delgadillo has had a passion for performance, especially in the realm of dance and movement. For 5 years, Itzel was an active participant of the Penn Point Dance Academy in Bakersfield in which she primarily performed hip hop. However, at McKee Middle School, Itzel knew that she wanted to go in a different direction with regards to the style of dance that she was performing. At McKee, Itzel and a group of students formed a dance club and key to their club was an appreciation and PRIDE for Mexican culture and thus, Folklorico became a central dance for this group. Itzel admits that her mother had always wanted her to dance these traditional Mexican dances and when she took to it as an 8th grader, she fell in love with the beauty and colors of the dance. As a 9th grader, Itzel continued to perform Folklorico as she joined the Ballet Folklorico Valle Dorado program at Golden Valley High School, one of the prominent programs in the Kern High School District. “I love my Mexican culture,” states Izel, “Folklorico allows me to express myself because I love to dance, but I also love the wonderful and traditional colors of my heritage.” Itzel’s passion has become contagious for the other performers in the GVHS program as she is quick to help and assist others in their desire to share their Mexican culture. Itzel Delgadillo was featured in the Spring 2019 KHSD Achieve Magazine. Itzel loves the beauty and colors of Folklorico. (Photo provide by the Kern High Network)

In addition to her participation in Folklorico, Itzel has also found passion in the movements of color guard. As she began the transition away from hip hop, Itzel found joy in the more contemporary dance movements that are found in color guard. In just her first year as a freshman, Itzel fell in love with color guard and began to establish herself as a promising performer and leader within the Golden Valley program. “Itzel shows promise,” indicates Golden Valley coach Nancy Cisneros, “She is starting just her second year and she is already a star.”  With the early success there have also come bumps and bruises along the way. Earlier this week, in trying to teach a freshman a new movement, Itzel twirled the flag a little too high and it was a little too far out from her graps. The end of the flag pole hit her on her head, leaving a nice size bump and bruise. “Color guard leaves me bruised sometimes,” laughs Itzel, “I looked like a unicorn for a day or two.” In just her second year in color guard, Itzel Delgadillo has established her self a star with a lot of promise as indicated by her coach, Nancy Cisneros.

In addition to her considerable GROWTH and PRIDE in performance and dance, as evident in Folklorico and color guard,  Itzel is extremely committed to SERVICE. With her family, Itzel helps to pick up trash and restore gardens in order to bring beauty to her community. Itzel has also participated in community events to benefit charities as she has walked for lung cancer and volunteered at CALM in order to bring more awareness for pediatric cancer. After high school, she wants to attend the Fashion Institute of Design and Merchandising (FIDM) and eventually create her own clothing company that donates some of the profits to assist 3rd world countries. “As a kid, I loved to play dress up with different color combinations,” says Itzel, “I am fortunate, but students and children in other countries are not. I just want to give back and through clothes, people can express themselves in a good way.” Through her commitment to GROWTH, PRIDE, and SERVICE, Itzel Delgadillo is #BulldogSTRONG.

Itzel Delgadillo has been a great addition to the Golden Valley color guard program. Some of her best moments are at 1:05 and 1:40.

What Teachers Think of Itzel:

"Itzel has been a fantastic addition to our color guard family. As a second year member, Itzel continues to develop her skill every single rehearsal and always works toward personal and team growth. Always going out of her way to assist her team members in need, Itzel demonstrates service every opportunity she gets. Her passion and dedication are vividly present and highly admired by her peers and coaches." - Nancy Cisneros, English Teacher and Color Guard Coach, Golden Valley High School

"Itzel Is a natural, born to shine on the stage. Itzel is passionate about Folklorico and dedicates many hours to our folklorico Valle Dorado. Itzel is only a sophomore and has become a leader in our group. Itzel is always willing to take time to  teach her teammates perfection on every dancing move." - Gaby Ruvalcaba, Computer Instruction Technician and Folklorico Advisor, Golden Valley High School

"What a blessing to have Itzel in my French class! She sets the bar very high for herself, and she is an excellent example of being Bulldog strong. Academically, she is an avid learner, always alert, and 100% ready for the challenges in expanding her mastery of the French language. She is supportive, open minded, and a kind young lady, especially when it comes to assisting a classmate in improving French communication skills. She is poised, has ethics, and is committed to being on her best behavior. With that attitude, Itzel will go far..."" - May Feghali, French Teacher, Golden Valley High School