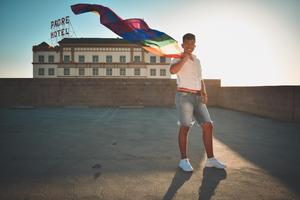 For his dedication to GROWTH and PRIDE in performance through color guard and Folklorico and in his commitment to SERVING others in leadership and in the wide array of clubs in which he is an active participant, Gilbert Alvarado is #BulldogSTRONG. Plans After High School: Attend Bakersfield College for 2 years and then attend California State University of Bakersfield (CSUB) and earn a BA in Nursing. Gilbert wants to eventually be a trauma nurse.

What Makes Gilbert #BulldogSTRONG: For Gilbert Alvarado, color guard has consumed his life and has allowed him to demonstrate much GROWTH and passion as he gives 100% with each and every performance. For three years at Ollivier Middle School, Gilbert was actively involved in the color guard program as honed his skills in order to perform in a more intense atmosphere. In addition to his commitment to middle school color guard, Gilbert performed with the independent team Intensity, which is part of the Pep and Pageantry Arts Association of Central California (PPAACC). As a result of his success, Gilbert was able to try out and join the exclusive Team Blue Devils B team which is associated with Drum Corps International (DCI), a prestigious and accomplished performance association that is nationally accredited and recognized. While on the Team Blue Devils B team in the summer of 2017, Gilbert was an integral part of the team's success as they earned a silver medal as they competed against 15 of the most elite teams across the nation in Indianapolis, Indiana for the DCI Championships. With his experience and passion for color guard, Gilbert has infused his energy to the Golden Valley program for his high school career and looks to carry the Bulldogs to many trophies, accolades, victories, and a shot at a national and world championship in his senior year. Gilbert Alvarado's passion is color guard and has been a major performer for Golden Valley High School for four years.

Gilbert’s passion for performance extends beyond color guard as he is also an active participant in the Golden Valley Folklorico program. Gilbert’s grandmother is the reason why he participates in these traditional Mexican dances. “My grandmother was a very active Folklorico dancer when she was younger,” states Gilbert, “She has always encouraged me to do Folklorico and now that I do, it allows me to connect with her and with my Mexican heritage.” Gilbert is entering his second year in Folklorico and is glad that he has this sacred opportunity to honor his family and culture. Gilbert Alvarado has taken to Folklorico to honor his heritage and his grandmother's passion for the traditional Mexican dance as well.

With his dedication and passion for the performing arts, Gilbert is very much committed to SERVING others. This year, Gilbert had a strong desire to be part of leadership at Golden Valley and as a result, he was elected to serve as the ASB Commissioner of Activities. “I have always wanted to be part of ASB,” indicates Gilbert, “I want to leave a mark and legacy for future generations of Bulldogs.” In addition to his leadership role, Gilbert is active in many clubs on campus: Japanese Culture Club, Art Club, Straight and Gay Alliance (SAGA), Dance Dance Club, and is looking to join the RN Explorers this year - a club dedicated to the nursing profession. Gilbert is also committed to SERVING the community as he is an active donor to the Houchin Blood Bank. Since he was sixteen years old, Gilbert has been donating blood at school or at the Houchin location on Truxtun. For his dedication to GROWTH and PRIDE in performance through color guard and Folklorico and in his commitment to SERVING others in leadership and in the wide array of clubs in which he is an active participant, Gilbert Alvarado is #BulldogSTRONG.

Gilbert Alvarado considers Golden Valley High School's performance "The Consequence of Sound" to be one of his favorite performances.

What Teachers Think of Gilbert:

"Gilbert is the epitome of excellence. I have had the honor of being his coach for what will be 4 years now and it has been amazing to see his progression from a timid boy to a confident, young man. Gilbert is constantly rooting for his school and his team. I know his heart is 100% blue and gold! Gilbert is captain of the color guard team, a veteran member of Blue Devils B Drum Corps, a member of ASB, and dances for Ballet Folklorico Valle Dorado, and is a member of many clubs on campus but not once have I seen a lack of commitment to our team or to his education. He is proud to be who he is, and it truly shows. Gilbert is always a joy to have around. I am so proud of the success he has seen through his high school years and I wish nothing but the best for him! He has left a lasting impact on our team for many years to come." - Nancy Cisneros, English Teacher and Color Guard Coach, Golden Valley High School

"Gilbert was a student in my US History class during his Junior year.  Gilbert was a pleasure to have as a student in my classroom. He always exhibited a friendly demeanor to other students in my class and was always willing to help with classroom materials when called upon.  He demonstrated a tremendous work ethic throughout the school year. Perhaps his greatest contribution was his SERVICE TO OTHERS, both inside and outside of the classroom. Gilbert is a walking example of what it means to be #BulldogSTRONG!" - Ed Crosby, World History Teacher and Varsity Girls Tennis Coach, Golden Valley High School

"Gilbert is serving as the Commissioner of Activities on the ASB Executive Board this year. He has been helpful and is very eager to be involved in activities on campus this year. He is a nice and kind young man and represents what we want in students - to be #BulldogSTRONG. " - Valerie Black, Activities Director, Golden Valley High School