Week 4 Football: The Bulldogs Fall Short to the Saints Behind a Potent Running Attack 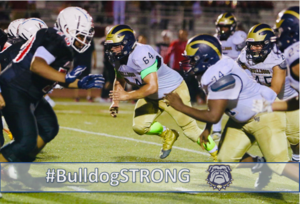 Last week, the Golden Valley Bulldogs won their 1st game since 2017 and looked to continue with their winning ways against the Saints of Santa Maria High School Friday night. However, the Bulldogs fell short as they were met with a potent running attack from the Saints.

Last week, the Golden Valley Bulldogs won their 1st game since 2017 and looked to continue with their winning ways against the Saints of Santa Maria High School Friday night. However, the Bulldogs fell short as they were met with a potent running attack from the Saints.


Led by quarterback Dominick Martinez (#4) and running back Sammy Herrera (#12), the duo accounted for all of the Saints touchdowns in a very lethal read option scheme that the Bulldogs simply couldn’t contain. Through their system, Martinez and Herrera were able to control the clock and keep the Bulldogs’ defense on the field as both the time of possession and amount of plays on offense ruled in the Saints favor. “They are a pretty dynamic combination,” stated Saints Head Coach Dan Ellington, “Dominick is very intelligent at the quarterback position with what we are trying to accomplish offensively and Sammy is a pretty great high school running back with top end speed and toughness.” Martinez had two rushing touchdowns in the 1st and 3rd Quarter respectively and Herrera scored his touchdown in the 2nd quarter.


For their efforts, the Bulldogs played tough and demonstrated a mentality they have shown all season, resilience. Defensively, the Bulldogs received valiant efforts from the likes of Ernesto Romero (#16), Riley Dickey (#64), Tommy Struggs (#74), and Isaiah Ali (#8) as they did their best to limit the Saints running attack with their physicality and endless pursuits to tackle Martinez and Herrera. Offensively, the Bulldogs put together a very solid drive in the 3rd quarter behind a 24 yard reception from Marquel Bruley (#3) to Zajan Dejesus (#2), another 17 yard reception from Bruley to Simeon Trimble (#5), and capped it off with a 6 yard touchdown run from Trimble. Iziah Coronado (#22) exploded for a 68 yard rush in the 3rd quarter, but the Bulldogs were unable to capitalize on the good field position (1st and Goal) with any points. Running the ball was the Bulldogs most positive impact on offense as Coronado had 92 yards, Trimble had 52 yards, and Edeil Canales (#45) had 15 yards rushing respectively.  At the end of the night, though the Bulldogs fell short, they never quit and showed tremendous effort all game. “I am extremely proud of our effort because playing on the road and out of town is tough,” commented Bulldogs Head Coach James Cain, “We didn’t play our best football and things didn’t quite go our way, but we did not quit and we competed for four quarters.” The Golden Valley Bulldogs (1-3) will host the Highland Scots (3-1) at Bulldog Stadium in Week 5 and the Santa Maria Saints (2-2) will travel to Visalia to take on the Mt. Whitney Pioneers (0-4).