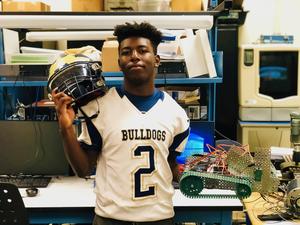 In his desire to excel and succeed athletically in football and basketball, academically in engineering, and in being a leader in the classroom, on campus, and in the community, Conroy Hayes is #BulldogSTRONG. Plans After High School: Conroy wants to attend Cal Poly San Luis Obispo and major in Mechanical and Computer Engineering so that he can one day create and develop robots.

What Makes Conroy #BulldogSTRONG: Last year as a freshman, Conroy Hayes left his mark on the football field and demonstrated to the rest of Kern County, that the future is bright and full of promise at Golden Valley High School. At the running back position, Conroy possesses a unique combination of speed and power in route to 962 yards and 20 touchdowns during his freshman year. This year as a sophomore on the JV team, Conroy has again displayed his talents as he has accumulated 376 yards on the ground with 6 touchdowns including a 62 and 50 yard touchdown run against North High School and South High School respectively. In addition, Conroy has selflessly committed himself to playing on defense as he is the starting middle linebacker for the Bulldogs and has 26 tackles. As a lifelong San Francisco 49ers fan, Conroy tries to model his game after Frank Gore with consistency, teamwork, and always moving forward as a running back. In addition to his talents on the gridiron, Conroy is also very active with the Golden Valley basketball program. On the frosh/soph team last year, Conroy averaged 12 points per game and like on the football field, he demonstrated a combination of speed and power for his Bulldogs basketball team.

In two years at Golden Valley High School, Conroy Hayes has accumulated over 1,300 yards on the ground and 26 touchdowns.

Beyond athletics, Conroy has been exemplary in the classroom. Enrolled primarily in gate classes and AP European History, Conroy has earned a 3.643 GPA so far in his high school career. Conroy is also part of the Project Lead the Way (PLTW) program which is focused on engineering and design; as a freshman Conroy took Introduction to Design and this year, he is enrolled in the Principles of Engineering. Eventually, he wants to attend Cal Poly San Luis Obispo and major in mechanical and computer engineering with the intention of creating robots that benefit the world. Conroy credits much of his success in the classroom to vast support system that is available at Golden Valley High School. “One thing that I really appreciate about Golden Valley High School is how helpful the teachers and staff are,” comments Conroy, “Whenever I have a question or issue, they are quick to help me become successful. Teachers have taught me that whenever a wrong answer is made, we should strive to correct it and move forward.”

Perhaps, Conroy’s strongest asset to Golden Valley High School is his leadership. He may not necessarily be the most vocal leader, but he truly lives to help others. Recently, Conroy was selected by staff to attend the Golden Valley High School Leadership Conference in which he worked with other Bulldog students in assuming leadership positions on campus. “I have learned a lot about being a leader at Golden Valley,” states Conroy, “Some of the elements of being a good leader involves respect, intelligent decision making, organization, patience, positive communication, and the ability to engage in serious discussions with friends and classmates. I hope to develop these characteristics in my time at Golden Valley.” For his part, Conroy is inspired by leaders who are trying to make positive change in the world such as former San Francisco 49er Colin Kaepernick. The coaches, teachers, and administration at Golden Valley recognize the leadership skills that Conroy possesses. One time at a football game, Conroy and his teammates were watching the varsity play from the stands and he noticed the bus that was slated to take them back to Golden Valley was not parked where it should have been at the time of pick up. Conroy took it upon himself to make sure that administrators were notified and the bus showed up shortly after. It may seem like a small gesture, but for Conroy, he wanted to ensure that his teammates did not miss the bus and were safely home. “I care about my team,” states a Conroy with PRIDE, “I want to make sure that they are good to go in all situations.” In his desire to excel and succeed athletically in football and basketball, academically in engineering, and in being a leader in the classroom, on campus, and in the community, Conroy Hayes is #BulldogSTRONG.

This year, Conroy Hayes has had some impressive touchdown runs including one from 62 and one from 50 yards respectively.

What #BulldogSTRONG Means to Conroy: "#BulldogSTRONG means that we take efforts to make the school a better and safer place. It brings us together and allows us, as students, to support each other and give us good advice. GPS allows our school to be fun place that welcomes everyone with open arms.”

What Teachers Think of Conroy:

"Conroy Hayes is one of the reasons I am excited about the future of our football program here at Golden Valley. He is a great example of what a student athlete should be. He leads by example of what it means to be Bulldog strong to his teammates and classmates on the field and in the classroom everyday. I am grateful to have Conroy be apart of this program and school and excited for his future." - James Cain, Head Varsity Football Coach, Golden Valley High School

"I had Conroy for the accelerated Gate Geometry over the past summer. Simply put, he was outstanding. He would star specific questions he was struggling with and would stay in at break to clarify any misunderstandings. He showed leadership in the class by supporting his peers which made him popular among his classmates." - Paul Hernandez, Mathematics Teacher and Varsity Track & Field Coach, Golden Valley High School

"Conroy is the type of student athlete that every coach dreams to have on their team. He comes to practice every day ready to go and works hard to make himself and his teammates better. Conroy’s leadership on the football field and on the basketball court is immeasurable. Along with being a great athlete, Conroy also excels in the classroom carrying a 3.67 so far in high school. We expect big things from Conroy in the future." - Robert Haskell, Athletic Director, Golden Valley High School

"As a freshman in my GATE English class, Conroy embodied growth in the classroom and on campus by overcoming obstacles. Even though much of Conroy’s after school time was consumed by sports, he still managed to complete his work on time and ask for help and attend tutoring when needed. Conroy also demonstrated service in the classroom. He cared about the physical space of the classroom and often volunteered to organize bookshelves, classroom materials, and tables and chairs to make the environment more comfortable and inviting for his classmates and others. Conroy is #BulldogSTRONG!!" - Jamie Contois, English and ELD Teacher, Golden Valley High School
Print