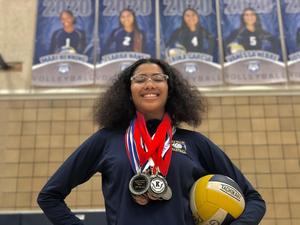 For her efforts on the volleyball court, in throwing the shot put and discus, and in her love of being a Golden Valley Bulldog, Tearra Haney is #BulldogSTRONG. Plans After High School: Attend a community college in Mississippi for two years and then attend the University of Memphis. Wants to get a BA in Philosophy or Biology to either teach or work in pediatrics. Tearra just wants to help people.

What Makes Tearra #BulldogSTRONG: Gifted with height and natural athleticism, it seemed obvious that Tearra Haney was destined for a life in volleyball. However, for the senior, this was not the case as picked up volleyball late in her life as a junior at Golden Valley High School. Playing JV as a junior, Tearra learned a lot about the fundamentals of volleyball as she grew into a solid player and the cornerstone for the Lady Bulldogs this year. Tearra’s improvement turned into a genuine passion for the sport as she took to participating with the Vision Zone Volleyball Club in the offseason. Through the GROWTH of Tearra, in addition to the rest of her teammates, the Lady Bulldogs have rebounded from a winless 2018 campaign, to establish itself as a solid volleyball program once again. “I have learned a lot through playing volleyball at Golden Valley,” comments Tearra, “The value of teamwork is vitally important to our success as I have to rely on my teammates in order to execute the plan of attack. I have also learned the power of sportsmanship because even on the volleyball court, we can be #BulldogSTRONG.”  This year, Tearra has established herself as a solid outside hitter as she has accumulated 183 kills from the right side. In just her second year with the Lady Bulldogs, Tearra Haney has become a solid leader for the volleyball program with 186 kills. (Photo provide by Miguel Garcia)

Though she has GROWN to enjoy the sport of volleyball, Tearra’s passion perhaps lies in Track and Field as she has committed four years to the Golden Valley program and as a thrower of the discus and shot, Tearra has established herself as one of the top talents in Kern County.  As a junior, Tearra threw 125’6 in the discus in route to a 1st place finish in the South Yosemite League Championship. In shot put, Tearra threw 34’11 as a personal record and finished in 2nd place behind her teammate and graduate last year, Tiffany Amos. “I enjoy the process of throwing the shot and discus,” states Tearra, “I have learned in track the importance of working out and training in order to maximize my performance.” Her love of throwing objects was evident in the Powder Puff football game last Spring where she played quarterback for the juniors. For her part, Tearra had one passing touchdown and one rushing down as the Class of 2020 defeated the Class of 2019, 19-0. “Playing quarterback was a big moment for me,” smiles Tearra. Tearra Haney will be among the leaders in Kern County in both the shot put and discus for Spring 2020. (Photo Provided by the Kern High Network)

Beyond athletics, Tearra is appreciative of all of the experiences that she has had at Golden Valley. “I love the people at Golden Valley,” indicates Tearra, “There are so many different people and personalities, yet we are one big family.” In addition to the diversity at Golden Valley, Tearra appreciates the support she has received from staff in her journey as a Bulldog. “Teachers and staff here are so reliable and helpful,” says Tearra, “I haven’t always been the best student, but the staff never gave up on me and helped me along the way.” For her efforts on the volleyball court, in throwing the shot put and discus, and in her love of being a Golden Valley Bulldog, Tearra Haney is #BulldogSTRONG.

Against Arvin, Tearra Haney demonstrated her ability to block and spike for the Lady Bulldogs.

What #BulldogSTRONG Means to Tearra: "#BulldogSTRONG means being a good citizen and treating others, no matter how different they are from you, with respect and kindness. It also means that no matter what the circumstance is, we have to honor our commitments by giving 100%.”

What Teachers Think of Tearra:

"Tearra is energetic and positive young lady who always has a smile on her face. Put her on the court for volleyball or the ring for track, that fierce competitor comes out. Tearra is that type of athlete that once she sets a goal, for herself and her team, she does everything to accomplish it. I know she has her sights set on that state discus title and I believe she will get it." - Robert Haskell, Athletic Director, Golden Valley High School

"Tearra genuinely cares about others and it shows in everything she does; she is always helping others be the best that they can be. She always  takes time to help the younger volleyball players with technique and advice; she is a true Bulldog and always exemplifies Growth ,Pride, and Service!" - Bill Richardson, PE Department Chair and Head FS Volleyball Coach, Golden Valley High School

"I am very glad Tearra was selected for the #BulldogSTRONG Student Spotlight. She is bulldog strong because she is dedicated to her school, she is a natural leader and she has an enthusiasm that is contagious. When I had her as a world history student, she would always take a leadership role in group activities, taking charge of delegating tasks and making sure that people were getting their work done. She also always volunteered to help, whether it be passing out papers or helping a classmate who didn’t understand something. Tearra also did Mock Trial for a year, where I watched her put in her best effort as bailiff and encourage others on the team. She is very involved in things on campus and puts her all into everything that she does. Her enthusiasm for school and activities is contagious and she always manages to get other people excited and involved." - Trisha Brown, Social Studies Teacher and Head Swim Coach, Golden Valley High School

"Tearra is a committed, conscientious teammate who is always ready to smile. She is the first to celebrate and is always open to find ways to improve for the sole purpose of helping her teammates reach their potential. Her athletic talent is a joy to watch and I am grateful for the opportunity to be a small part of her Golden Valley journey. Go Bulldogs!" - Meladee Gardella, Head Varsity Volleyball Coach, Golden Valley High School