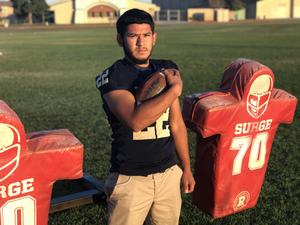 For his desire to be the most coachable, hardest working, and best teammate, in addition to his success on the field, Iziah Coronado is #BulldogSTRONG. Plans After High School: Attend Bakersfield College and play football or any other school that will allow him to play. Iziah jokingly states, “After I high school I hope to grow another few inches.” After college, Iziah is interested in construction management.

What Makes Iziah #BulldogSTRONG: Entering high school, Iziah Coronado had never played organized football, but was always a fan of the sport as he is a lifelong Raiders fan and more specifically, a fan of running backs of which include the likes of Marshawn Lynch, Darren McFadden (in his Raider years), and the legendary Hall of Famer, Barry Sanders. When Iziah came to Golden Valley, he knew that he wanted to play running back and model his play after some of his idols and heros. It took a while for Iziah to get acclimated with the position as he had to earn his way into the starting lineup. When Iziah got his chance to run the ball, he seized the opportunity and was successful. As a freshman, Iziah rushed for 847 yards and was selected as the Most Improved Player by his coaches. With confidence in his ability to run the ball, Iziah capitalized on the momentum of a positive rookie campaign, by having an even better season as a sophomore on the JV team. On JV, Iziah rushed for 912 yards and 4 touchdowns and this time around, he was selected as the Most Valuable Player by his coaches. In the off season, Iziah became one of the regulars for the Bulldog Football program that showed up everyday to the weight room, giving maximum effort along the way and impressing coaches by his work ethic and coachability. “Iziah is the epitome of #BulldogSTRONG,” states Head Coach James Cain, “The work he put in the offseason has translated to success under the Friday nights on the football field.” This year as a junior, Iziah has rushed for 626 yards and 2 touchdowns with an additional 7 catches and 118 yards from his position at running back. Perhaps his most memorable moment was his 45 yard TD run against South High School that allowed the Bulldogs to win 20-7 over the Rebels, ending a 17 game losing skid for Golden Valley. “Football allows me to release stress,” states Iziah, “There is nothing like the environment that surrounds football. From the cheerleaders, color guard, band, and the loud fans, there is nothing like football under the Friday Night Lights.” As a junior this season, #22 Iziah Coronado has rushed for 626 yards and 2 touchdowns and is known for his hard running and always moving forward. (Photo by Nick Ellis)

However, the success on the gridiron is just a small part of what makes Iziah #BulldogSTRONG. The largest part reason for him being #BulldogSTRONG is that he is the ultimate teammate and is extremely coachable. When the Bulldog coaches needed a punter, Iziah stepped in and assumed the duty of punter and has done so all season. When the Bulldogs needed players on kick off, kick return, linebacker, or defensive end, Iziah’s standard response to coaches was, “Yes coach. Anything I can do to help the team succeed.” Iziah selfless behavior was on full display at North High School. After scoring a touchdown and shifting the momentum to the Bulldogs favor at that moment in the game, Iziah didn’t take any plays off and on kick off, sprinted down and made a tackle that continued to energize his teammates. Some players would have taken that play off to get some water, but not Iziah. Last week in a game against Tehachapi, he sustained an injury that kept him out for a portion of the game and instead of just sitting on the bench, Iziah picked up water bottles and began to provide them to his other teammates that were playing on the field. “We are moving in the right direction with our football program,” expresses Iziah, “We are getting rid of the negativity and excuses that prevent us from being successful. The coaches and players are now focusing on becoming better leaders and as a result, we are becoming better players and our brotherhood among teammates is becoming stronger.” For his desire to be the most coachable, hardest working, and best teammate, in addition to his success on the field, Iziah Coronado is #BulldogSTRONG. Iziah Coronado is the ultimate teammate as evident in his role as punter, multiple positions on Special Teams , and even playing defense. (Photo by Joe Bergman)

#22 Iziah Coronado had a big game on the Kern High Network Game of the Week against South. His touchdown at the end of the game solidified the win against the Rebels.

What Teachers Think of Iziah:

"Iziah Coronado is very respectful, eager to help others, and is one of my more hardworking students." - Okon Udo, Chemistry Teacher, Golden Valley High School

"Iziah Coronado is a great example of a committed Golden Valley Bulldog. He has shown great pride in his work,  amazing growth in a language that is not his first, and service not only in class but also on the football field.   His athletic abilities have proven that character, value, and moral support comes a long way. Iziah is a reflection of what a GV bulldog can accomplish when  setting goals and that is admirable. " - Eva Perez, Spanish Teacher, Golden Valley High School

"Iziah has been consistently a bright spot in our program since January. He is a hard worker who shows up and earns all the recognition he gets. He is respected by all coaches and teammates and we are all excited that he will be coming back next season. Isiah is the perfect example of what it means to be Bulldog Strong" - James Cain, Head Football Coach, Golden Valley High School

"When I was approached to write something about Iziah, I wondered how is it possible to put into words how much heart this young man has. If you were to go to a varsity football practice and watch Isaiah you would think it was a game. He is always going 100% and the reasoning he does, in his own words, is to make his teammates better. It really has been a pleasure to watch this young man grow as an athlete and also a team leader." - Robert Haskell, Athletic Director, Golden Valley High School