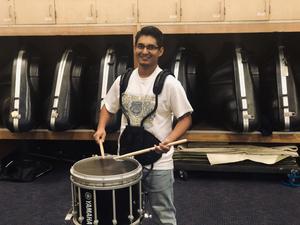 For the PRIDE he shows in being  the Drum Captain for the Golden Valley Bulldog Brigade and in the SERVICE he demonstrates by making positive contributions to the community through his music, Christian Rodriguez is #BulldogSTRONG.

What Makes Christian #BulldogSTRONG: As a student at Horizon Elementary School, Golden Valley High School senior Christian Rodriguez remembers listening to the Ollivier Middle School band and being completely captivated by the music that was being played. When Christian finally became a Lion, he found interest in percussion, quickly cementing his place as a member of the Ollivier Middle School Drumline and did so for three years. With his passion as a percussionist established, Christian had visions on being an active participant of the Bulldog Brigade when he came to Golden Valley High School. Though he can play multiple percussion instruments, Christian zeroed in on perfecting the craft of playing the snare and tenor drums. “I love playing the drums,” indicates Christian, “It is the most flashy and noticeable instrument in the band and allows me to come out of my shell. I am typically a quiet person, but the drums allow me to be more expressive.” This year as a senior, Christian has become a stable leader for the Bulldog Brigade as he was selected to be the Drum Captain. “Marching band at Golden Valley has taught me a lot about leadership,” indicates Christian, “It has taught me how to work with other people, especially the younger students so that we can be successful.” As Drum Captain for the Bulldog Brigade, Christian Rodriguez has established himself as a leader on Golden Valley's campus.

Because of Christian’s leadership, the Bulldog Brigade has seen its share of success this year as evident in last weekend’s Centennial High School Band Competition in which the Golden Valley Drumline finished in 2nd Place and the entire Bulldog Brigade finished in 1st Place as a team. Beyond the leadership skills he has developed and the success that he has experienced, Christian views his position as a Golden Valley band member from the lens of SERVICE. “Band is an opportunity for me to truly serve others,” expresses Christian, “It allows me to be able to serve the community by providing positive entertainment.” For the PRIDE he shows in being  the Drum Captain for the Golden Valley Bulldog Brigade and in the SERVICE he demonstrates by making positive contributions to the community through his music, Christian Rodriguez is #BulldogSTRONG.

What Teachers Think of Christian:

"Christian is the definition of being #BulldogSTRONG. I have seen him grow from a shy freshman to a phenomenal leader now his senior year. Christian holds the title of being the Drum Caption extremely seriously. Christian also represents being #BulldogSTRONG by always holding himself accountable and helping his peers play to the best of their abilities. As a band director I know that anything I ask of him he will do, without question. He has shown major GROWTH by playing multiple instruments in the program. He has PRIDE in himself, his peers, and the Bulldog Brigade, and the Drumline as well. Christian is very polite, he always does what is asked of him by me or his coaches. He constantly holds himself AND his section to a higher standard. He does a great SERVICE to our program on a daily basis and I couldn’t be more grateful to be his Band Director." - Kristen Torres, Bulldog Brigade Band Director, Golden Valley High School

“Christian is very dedicated to what he does in school. Not only is he a great student , but also a great leader and an excellent example for other students. He is a person of integrity and assures that if anyone needs help that they receive it.” - Steven Drummer, Drumline Instructor, Golden Valley High School

"Christian was one of my hardest workers in strongbody class; he always had a positive attitude and went above and beyond. He took great pride in his workouts and helped his fellow classmates be the best they could be." - Bill Richardson, PE Department Chair, Golden Valley High School

"Christian Rodriguez has been a wonderful addition to the GVHS Bulldog Brigade. He is one of the first students to show up, the first to volunteer to help with anything that may come up, and the last to leave after those long competition days. He shows pride through his commitment to band and drum line. As drum captain, Christian leads by example every day and constantly demonstrates compassion to his team through a willingness to lend a hand." - Nancy Cisneros, English Teacher and Color Guard Coach, Golden Valley High School