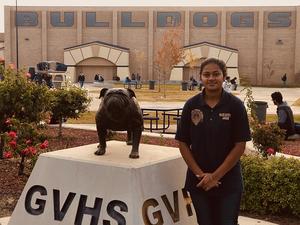 For the GROWTH that she has demonstrated since arriving to the United States in 2016 and in the nearly 800 hours of community SERVICE through the KHSD Police Activities League, Jashanpreet Kaur is #BulldogSTRONG. Plans After High School: Attend Bakersfield College for 2 years to become a Dental Assistant. Has the goal to continue to study in the dental field, go to dental school, and one day become a dentist

What Makes Jashanpreet #BulldogSTRONG: In 2016, Jashanpreet Kaur and her family moved to Bakersfield in order for her mother to be reunited with her brother of whom she hadn’t seen in many years. For Jashanpreet, born in the village of Moga in the state of Punjab, India, her biggest fear in coming to the United States of America was enrolling in high school. “It was a little scary coming to an American high school,” states a shy Jashanpreet, “I knew hardly any English and so yeah, I was a little scared.” However, Jashanpreet soon found comfort and support at Golden Valley High School as she immersed herself in the English Language Development (ELD) program and began to flourish. In just a short time, and with some hard work, Jashanpreet tested out of the ELD program because her grasp of the English language as she was able to demonstrate high levels of literacy competency.  As her confidence grew in the English language, so to did her academic achievement as she moved from taking entry level courses to primarily taking college prep courses. At every step of her academic journey, Jashanpreet has shown much success as she earned an A in every class except for one (she earned a B) and as of right now, she currently holds a 3.95 overall GPA, with aspirations of attending Bakersfield College and becoming a dental assistant. Jashanpreet has demonstrated a core tenet of being #BulldogSTRONG by always giving 100% effort as she continues to GROW in the classroom. Since arriving to the United States in 2016, Jashanpreet Kaur has GROWN academically, earning a 3.95 GPA overall at Golden Valley High School.

However, what separates Jashanpreet from most students is her commitment to SERVICE. As a freshman, Jashanpreet joined the Kern High School District Police Activities League (PAL), an organization focused on community service, with thoughts of one day becoming a police officer. Though Jashanpreet has changed career plans, her commitment to service has never wavered. During her junior year, Jashanpreet accumulated over 500 community service hours and to date, she has close to 800. Among the community service she has performed: face painting for children at Halloween carnivals, cleaning up Camp Hamilton, providing Christmas gifts to senior citizens, making cards to give to the elderly and needy on many different holidays, delivering food and clothing to homeless shelters, preparing and distributing backpacks for homeless children so that they have supplies for school, and many other activities that help the homeless, elderly, veterans, and other people that are in need. “I enjoy community service,” quietly states Jashanpreet, “I meet a lot of new and wonderful people and it feels good to see other people smile.” Because of her efforts and time spent committed to community service during her junior year, Jashanpreet was selected as the Kern High School District Police Activities League Student of the Year. For the GROWTH that she has demonstrated since arriving to the United States in 2016 and in the nearly 800 hours of community service through the KHSD Police Activities League, Jashanpreet Kaur is #BulldogSTRONG.

Jashanpreet Kaur loves community service because it allows her the opportunity to SERVE others such as face painting for children during Halloween.

What Teachers Think of Jashanpreet:

"Jashanpreet Kaur is one of the most amazing students I have encountered during my 32 years of teaching.  She shows service as a quiet, humble leader who always puts others first and never seeks glory for herself.  Her efforts volunteering with the GVHS Police Activities League are tireless as she steps forward every weekend to help out the less fortunate in our community.  The growth she has shown during her four years at Golden Valley is unparalleled. Starting as an ELD 2 student with very little English, she very quickly learned the language and reclassified Fluent English Proficient in just two years. More importantly, her developing confidence has allowed her gregarious and whimsical personality to  shine through. In addition, she shows pride by maintaining an overall 3.95 GPA, and being an excellent role model for all she encounters by consistently giving her #Bulldog Best every single day." - Jane Hurttgam, Title I and ELD Coordinator, Golden Valley High School

"’AKA’ Jashan is quietly kind, artistic, funny, and puts her education first.  I have had the privilege of working with her throughout her high school career on several assignments, including Police Activities League (PAL), face painting, Sharing Table in the cafeteria.  She has shown ‘PRIDE’ when she is always on time and ready to do something new. Also she has shown ‘SERVICE by being helpful, positive, and treating others with kindness. Jashan, ‘continue to REACH for the stars’.  #BULLDOGSTRONGyouARE." - Wendy Akins, Title I and ELD Secretary, Golden Valley High School

"Jashan, is a well-rounded and exceptional student in the classroom. Not only does she demonstrate pride by excelling in the classroom, she also provides much service to her classmates. She is a great exemplar of what #BulldogSTRONG student is. Her classmates respect her eagerness to learn and more importantly they admire her kindness. Jashan deserves this recognition because her attitude towards learning and succeeding in the school is what makes her so likeable. I am very lucky to have her in my class, she makes my first year teaching a wonderful and smooth experience." - Marshall Garcia, World History Teacher and Soccer Coach, Golden Valley High School

"Jashanpreet Kaur is one of the most devoted and enthusiastic Kern High School District’s Police Activities League (PAL) members I have ever known.  She has donated more than 700 hours of her time to community service projects. She selflessly and tirelessly helps with numerous philanthropic causes, including helping our veterans, assisting the homeless and attending charity events.  Her contributions to PAL are truly remarkable and her devotion to helping others is worthy of the highest praise." - Ed Komin, Chief of Police, Kern High School District

"Jashanpreet has completed over 700 hours of community service since 2016, volunteering at countless homeless and veteran events.  She is artistically talented and her art work has been featured on over 4,000 Christmas cards and 2,000 Easter cards that PAL has distributed.  She is always nice to other people. She sets a great example to other students through her hard work and multiple capabilities. Because of her selfless service and extreme dedication to helping others, she was named KHSD PAL Student of the Year for 2018-19. " - John Money, KHSD PAL Advisor and Police Officer, Kern High School District