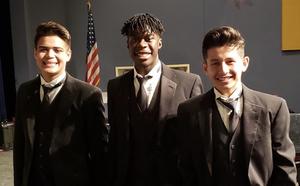 For the PRIDE they take in being part of the Golden Valley Choir Program and for being selected to the Central California Regional Honor Choir, Patrick Biakuse, Eleazar Abdulla, and Alex Luviano Sandoval are #BulldogSTRONG.

Plans After High School: Patrick - Wants to attend UC San Diego or UC Santa Barbara and study medicine to one day become an orthopedic surgeon; Elezear - Wants to attend a college or university and still exploring what he wants to do as a career; Alex - Wants to go into the medical field and possibly attend UCLA.

What Makes Patrick, Eleazar, and Alex #BulldogSTRONG: Among the many traditions during the Christmas season is singing carols with loved ones or to community members that need a smile brought to their face during the holidays. At Golden Valley High School, the choir program has established itself as one of the most stable and prominent programs in the Kern High School District for singers to sharpen their skills and share their talents through the various performances throughout the year. Recently, three members of the Bulldog Chamber Choir have stamped their place among the most elite vocalists in the Central Valley and for that, Patrick Biakuse, Eleazar Abdulla, and Alex Luviano Sandoval are #BulldogSTRONG.

Born in the city of Occra in the country of Ghana, senior Patrick Biakuse moved to Bakersfield at the age of 5 as his family wanted to provide him and his brothers better educational opportunities in the United States. Growing up, Patrick developed an appreciation of music and singing as he listened to his mother sing gospel music daily. “My mother had a big influence on my desire to sing,” states Patrick. The appreciation for singing allowed for Patrick to join the choir when he was at McKee Middle School where he sang for two years as a baritone in the Roadrunner Choir. The passion continued as Patrick joined the Golden Valley program during his freshman year and his talents were soon recognized as he was elevated to the Bulldog Chorale group after one concert. As a sophomore, junior, and senior, Patrick has been part of the Bulldog Chamber Choir, the top program at Golden Valley High School. Though he enjoys listening to The Weekend, Patrick sings bass and for his talents, he was selected to the Central California Regional Honor Choir and in the spring, will have the chance to compete for a spot on the All - State Choir. When he is not singing, Patrick enjoys basketball, he has played for four years at Golden Valley, and studying as he carries a 3.025 GPA while being enrolled in College Prep and Honors Classes.

For Eleazar Abdulla, choir is a new phenomenon as he played three years of percussions  for the Ollivier Middle School Band. Upon entering Golden Valley, the stars didn’t align for Eleazar to participate in band, but he still knew that he wanted to be involved with music in one way or another. “Music allows me to express myself,” indicates Eleazer, “I had to find another way for me to express my passion.” So, Eleazar decided to give the choir a shot without fully knowing if he could sing. Starting in Beginning Choir, Eleazar worked hard throughout the year and found joy in singing because it allowed him to fully express himself even more than playing the drums. “I love playing the drums,” states Eleazar, “But singing has allowed to express emotions that I didn’t know I had.” This year, as a sophomore, Eleazar is part of the Bulldog Chamber Choir as a tenor and finds inspiration from the likes of Bruno Mars. “I try to model my vocals after Bruno Mars,” explains Eleazar, “He has a unique style and I try to sound like him.” For his efforts, Eleazar was also selected to be part of the Central California Regional Honor Choir and like Derek, will be trying out for the All-State Choir as well. Additionally, Eleazar is trying out for wrestling and track this year, but is committed to working on his grades in order to attend college after high school.

Much like Eleazar, Alex Luviano Sandoval participated in the band during middle school, playing the clarinet at both Mountain View Middle School and Stonecreek Junior High. However, as an incoming freshman, Alex knew that he wanted to be part of the Golden Valley Choir because of family. Alex’s older cousin Amy Arriaga was a graduate of Golden Valley High School in 2018 and was successful in choir and further inspired him to join when he got to high school. Alex quickly found joy in choir and much like Eleazar, he was able to express emotions he didn’t know he had. “Choir allows me to express my emotions better,” indicates Alex, “I find out more about myself and my talents through singing and choir.” This year, as a sophomore as well, Alex sings bass for the Bulldog Chamber Choir and like Patrick and Eleazar, he was also selected to the Central California Regional Honor Choir. Alex is also very successful academically in the classroom as he carries a 3.357 GPA while being enrolled largely in GATE classes. Patrick, Eleazar, and Alex take PRIDE in being in the Golden Valley Choir because of the tight knit bond that has been formed. “There is a strong sense of community in our choir,” smiles Patrick, “Everyone is close and we hang out beyond our time together singing.” For the PRIDE they take in being part of the Golden Valley Choir Program and for being selected to the Central California Regional Honor Choir, Patrick Biakuse, Eleazar Abdulla, and Alex Luviano Sandoval are #BulldogSTRONG.

What #BulldogSTRONG Means to Patrick: "#BulldogSTRONG means treating people how you want to be treated. It also means that we should respect others with kindness so that we don’t make the Golden Valley experience difficult for others.”

What #BulldogSTRONG Means to Eleazar: "#BulldogSTRONG is about helping our friends and peers be successful. It also means that we should strive to do what is right all the time.”

What #BulldogSTRONG Means to Alex: "#BulldogsSTRONG means being confident, strong, and keep moving forward. When obstacles come our way, we overcome them and don’t look back.”

What Teachers Think of the Patrick, Eleazar, and Alex:

"Patrick never makes excuses. He always has a great attitude. Patrick is bright and hardworking. He is eager to participate and goes over and above in his efforts." - Larry Bluemel, Foreign Languages Department Chair, Golden Valley High School

"Patrick is not only an excellent musician, but also is constantly on the lookout for ways to help his fellow singers.  He goes out of his way to help others, including helping complete strangers pass their part test at the honor choir event.  Patrick is always there to support others." - Samantha Williams, Choir Director, Golden Valley High School

"Eleazar is both polite and respectful in the classroom.  He is conscientious in regards to his studies and is helpful with others.  He is also inquisitive and exhibits a serious demeanor. Eleazar demonstrates #BulldogSTRONG in that he is respectful to others, practices good manners, and treats others with kindness." - Ed Crosby, World History Teacher and Head Girls Tennis Coach, Golden Valley High School

"Eleazar is an outstanding musician.  He uses his talents not only to sing in the choir but also to help out whenever there is a need for a percussionist.  He is very diligent in learning his music and leading the tenor section in the choir." - Samantha Williams, Choir Director, Golden Valley High School

"When I think of Alex’s BulldogSTRONG characteristics, his service to others immediately comes to mind.  Alex is someone who treats others with kindness in the classroom, on campus and in his community. The other characteristic that comes to mind is his growth.  He is someone who instead of giving up, he grits up and goes forward. I’m so glad to have Alex as part of our Bulldog Community." - Lana King, English Department Chair, Golden Valley High School

"Alex is a dedicated musician.  He uses his skills to help his bass section peers learn their music to the best of their ability.  His talents are a core part of the success of the GV choirs.” - Samantha Williams, Choir Director, Golden Valley High School