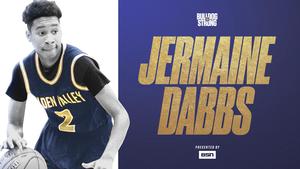 For the commitment he displays in being humble, supporting his teammates, and in being a Bulldog, Sophomore Sensation Jermaine Dabbs is #BulldogSTRONG. Plans After High School: Want to play collegiate basketball and if that doesn’t work out, Jermaine wants to attend UCLA, Stanford, or any university that offers sports medicine and or engineering.

What Makes Jermaine #BulldogSTRONG: At the heart of the NBA’s most prolific superstar, LeBron James, is a humility and deep seated commitment to his teammates and because of that, he has achieved astronomical levels of success on multiple teams and in multiple cities. Pulled from one of his many inspirational quotes of wisdom, James displays his humility with the following statement, “I think team first. It allows me to succeed, it allows my team to succeed.” Following in the footsteps of his hero, Sophomore Sensation Jermaine Dabbs has tried to adopt the humility of James as a basketball player at Golden Valley High School. For Jermaine, basketball has been an 8 year outlet for him, allowing him to get his mind off the normal stresses of adolescent development. Much like Lebron James, it’s the comradery found on the basketball court and the commitment to the concept of team that draws him to the game. “I try to be the best team player that I can be,” states Dabbs, “I don’t care about scoring and shooting, but if I get hot and the team needs me to score, I’ll do it.” As a freshman, Jermaine was inserted into the starting lineup on the junior varsity team and made an immediate impact averaging 15.6 points per game. As a sophomore, #2 Jermaine Dabbs has become a quiet and humble leader for the Bulldogs. (Photo by Miguel Garcia of the Kern High Network)

This year, as a sophomore, Jermaine was elevated to play varsity and his selfless behavior immediately left an impression on his coaches and teammates.  Head Coach Jayson Heard, Golden Valley Alum Class of 2007, comments, “Jermaine is the ultimate team player and exhibits a maturity that is impressive for a sophomore.”  For his part, Jermaine has averaged 12.3 points per game, 4.6 assists, and 2.3 steals this year establishing himself as the Bulldog point guard for the next few years. Jermaine’s biggest moment this year came against Golden Valley rival Ridgeview in the opening round of South Yosemite League play this past Tuesday night. All night Dabbs was able to break the full court pressure that the Wolfpack were presenting, providing easy buckets for his teammates. But as Jermaine indicated, if he gets hot shooting the ball, he will do what it takes to help his team win. Jermaine did get hot as he had 25 points, netting 6 3-Pointers, leading the Bulldogs to the 59-54 victory. “This was my best game so far in high school,” states a quiet Jermaine, “But I have to stay humble and focus on being the best teammate I can be and represent the school the right way.” For Jermaine, Golden Valley has become a place of comfort  and support in his ascension to becoming one of the top talents in Kern County. “This school is a second home for me as my teachers and friends have been extremely supportive here,” indicates Jermaine, “Because of them I want to do my part to help put Golden Valley on the map.” For the commitment he displays in being humble, supporting his teammates, and in being a Bulldog, Sophomore Sensation Jermaine Dabbs is #BulldogSTRONG.

#2 Jermaine Dabbs can do it all for the Bulldogs - dribble, pass, shoot, and drive.

What #BulldogSTRONG Means to Jermaine: "#BulldogSTRONG means being a good person on campus. It also means that we have to be true to who we are and never feel like we have to change for anyone. #BulldogSTRONG allows for me to make good decisions and not to be around negative influences.”

What Teachers Think of the Jermaine:

"As a sophomore Jermaine Dabbs has shown tremendous maturity and composure at the varsity level. As the starting point guard Dabbs had to adapt quickly to the pace of the game and the expectations that come with the role. Dabbs has shown true character through the 1st half of the season and continues to shine as a leader on and off the court. He has set some high standards for himself and it will be an amazing journey to be apart of." - Jayson Heard, Head Basketball Coach, Golden Valley High School

"Jermaine is always respectful. He is mindful of his grades and is motivated to do well on the court, in the classroom and in life." - Catherine Balint-Karr, PE Teacher, Golden Valley High School

"Jermaine is a respectful and astute student. His attendance is impeccable and he exhibits an eagerness to participate in all class activities. He is always kind and respectful to his fellow classmates and teachers making him a well rounded young man. He truly is #BulldogSTRONG!  " - Michell Gearhart, English Teacher and Assistant Dean of Students, Golden Valley High School

"Jermaine is a positive and social person. He cares for the people in the classroom. He has also worked through failure both on and off the court. In class, he did not like what his grade was and he took charge and fixed it. From the games I have gone to watch he learns from his mistakes he has previously made.” - Fernando Ruiz, World History Teacher, Golden Valley High School

“Jermaine is a kind person who gets along with everyone.  He is never a problem in my class and helps others. Very respectful.   He works hard at his studies and is a very good student. He is a joy to have in class.” - Wayne Peacock, Biology Teacher, Golden Valley High School