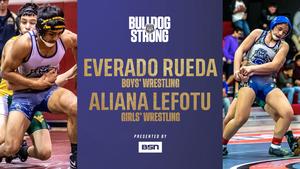 For continuing the excellence of Golden Valley Wrestling and for their toughness, grit, and commitment to their teammates, Aliana Lefotu and Everardo Rueda are #BulldogSTRONG.

Year in School: Junior and Senior

What Makes Aliana and Everardo #BulldogSTRONG: A key mantra of the Kern High School District is “A Tradition of Excellence” and at Golden Valley High School, the wrestling program has embodied that as the boys program has been South Yosemite League Champions since 2013. For their part, the girls programs have seen their fair share of success as evident in their 2019 CIF Central Southeast Area Team Championship and CIF Central Section Masters Team Championship. Two wrestlers that have epitomized being #BulldogSTRONG as well the toughness, grit, and commitment to maintaining the tradition of excellence of the Golden Valley wrestling program are Aliana Lefotu and Everardo Rueda.

Aliana Lefotu comes from a family of female wrestlers that have achieved much success at Golden Valley High School as sisters Avea (Class of 2017) and Arnae (Class of 2015) left their mark as Lady Bulldog legends. “I am extremely grateful,” states the younger Aliana, “That I have come from a great line of tough girl wrestlers.” Aliana has wrestled for 5 years, two years with the Top Dog Wrestling feeder program and the rest as a high school student at Golden Valley. As a sophomore, Aliana exploded onto the girls’ wrestling scene in Kern County as she accumulated a 42-12 record with 35 pins and a 2-2 record at the CIF State Tournament while wrestling at 131 pounds. This year, Aliana has increased her intensity and focus, hoping to make a deep run at the CIF State Tournament. “I love competing against others,” indicates Aliana, “Competition fuels me to be great.” Wrestling at 137 pounds, Aliana has already accumulated a 26-4 record with top three finishes in some of the toughest tournaments: Last Girls Standing (1st) Queen of the Valley (1st) Queen of the Hill (3rd) and Napa Valley Girl Classic (3rd). Aliana is currently ranked #1 in the CIF Central Section and #8 in the State at 137 pounds.

Aliana Lefotu of Golden Valley High School is #8 in California and #1 in the CIF Central Section.

Everardo Rueda also comes from a family of Golden Valley wrestlers as his older brother Francisco Rueda (2010) attended Great Falls College in Montana on a wrestling scholarship after wrestling as a Bulldog and younger sister Guadalupe Rueda currently wrestles for the Lady Bulldogs as a sophomore. Like Aliana, Everardo wrestled for the Top Dog Wrestling feeder program and has wrestled every year he has been in attendance at Golden Valley. “Wrestling at Golden Valley has taught me to be tough,” states Everardo, “I have learned discipline and the ability to overcome obstacles.” Last year as a junior, Everardo saw his fair share of success on the mat as he finished 32-13 at 132 pounds and was one match away from qualifying to state. This year, Everardo is focused and determined to wrestle at Rabobank during the first week of March as he has a 32-4 record and is currently ranked #7 in CIF Central Section and is Honorable Mention at the state level. Beyond the success Everardo has received on the mat, it is desire to help his team be successful that can most be remembered and it was shown on the gridiron and not the mat. This past season, Everardo played football for the first time ever and immediately made an impact for the Bulldogs as a defensive back. However, the most memorable moment was his game at Tehachapi High School. Faced with injuries at the quarterback position, Head Coach James Cain turned to Everardo and asked if he wanted to play quarterback - a position he had never played, let alone practiced. Everardo told Cain, “Yes. Anything to help the team.” Though the Bulldogs lost the game, Everardo completed a long pass and a rushing touchdown, but left his coach proud at his effort. “Everardo is a coach’s dream,” states Cain, “His commitment, toughness, and coachability make him successful.” For continuing the excellence of Golden Valley Wrestling and for their toughness, grit, and commitment to their teammates, Aliana Lefotu and Everardo Rueda are #BulldogSTRONG.

Everardo Rueda #4 was the ultimate teammate against Tehachapi as he played QB without ever playing the position.

What #BulldogSTRONG Means to Everardo: “#BulldogSTRONG means to be a good person and then be the best student and athlete we can be. It means respecting others at all times by representing the school the right way.”

What Teachers Think of the Aliana and Everardo:

"Nana (Aliana) has grown from being a timid student off the mat to being a confident and hungry competitor. When she walks into a gym her presence is known throughout. She is very humble despite the success she has achieved. Big things will come soon from her.” Juan Gamino, Head Girls Wrestling Coach, Golden Valley High School

“Aliana comes to my class everyday with a positive attitude and works very hard; she also helps her fellow classmates with instruction and motivation.  She works very hard in the weightroom to improve her wrestling and it she is having another great year on the mat!” Bill Richardson, PE Department Chair and Volleyball Coach, Golden Valley High School

"For the past few years, Aliana has represented Golden Valley and our wrestling program with hard work and success. Aliana will be successful this year because she is determined to do better than last year at the state tournament. It really has been a pleasure to watch this young woman grow as an athlete and also a team leader."  Robert Haskell, Athletic Director, Golden Valley High School

“Everardo is a truly gifted athlete but his natural ability does not define him as an athlete nor a person. His defining attributes are his resilience and determination. Many times throughout his high school career Everardo has dealt with adversity and has met those obstacles head on. He is one of the most resilient competitors I’ve ever had the privilege to coach. Everardo has continually shown GROWTH as he has matured as a person, a student, and a wrestler throughout his four years at GV. Everardo has shown PRIDE in his identity as a Bulldog Wrestler. He is very proud to wear our Blue and Gold as his hand is raised in victory and when he has received numerous awards for his achievements. Everardo has shown SERVICE in his willingness to help teammates and classmates. He is always the first to step up and help out. His sense of humor and his willingness to help has endeared him to his Bulldog family. Whether he is brightening someone’s day with a laugh, helping in class or ferociously competing on the mat, Everardo is always #BulldogSTRONG.” Aaron Wherry, Visual and Performing Arts Department Chair and Former Head Wrestling Coach, Golden Valley High School

“I’ve known him and his family for the past 11 years and in that time I have watched him grow into a fine young man.  Not only is he one of my son’s best friends he has become like a second son to me. He has always had a great work ethic inside the wrestling room and this year, he has also developed a great work ethic inside the classroom.  I’m confident to say that he will graduate and become a successful part of society.” Joe Rojas, Head Wrestling Coach and PE Teacher, Golden Valley High School

“Everardo is a great young man. The respect he showed his coaches and teammates along with his hard work ethic and great attitude made him instantly a leader on our team. He is the perfect example of what we want in our students and football players at Golden Valley. I will truly miss him and excited for what the future has in store for him.” James Cain, Head Football Coach and Campus Security, Golden Valley High School