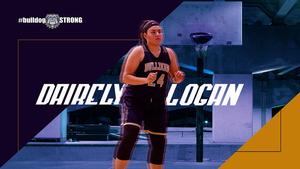 For her desire to be a leader on and off the basketball court and in her commitment to making memories for friends and all students at Golden Valley High School, Dairely Logan is #BulldogSTRONG. What Makes Dairely #BulldogSTRONG: As an incoming freshman, Dairely Logan knew that she wanted to be part of the Golden Valley High School Lady Bulldogs basketball program because of the success that they had accomplished and because of the coaches. “I could not wait to be a Lady Bulldog,” smiles Dairely, “Our campus is extremely supportive of the girls basketball team and with them reaching the Valley Championship game my sophomore year, I couldn’t wait to be on varsity.” Dairely has committed four years to the Lady Bulldogs and this year, she serves as a captain.  “She is the leader of my team, not because of stats, but because of everything that a stat can't measure,” states Head Coach Curt Wilson, “She is always early to practice, the most focused, and willing to accept any role on the team.” Due to her commitment, Dairely was selected to represent Golden Valley High School and the Lady Bulldogs basketball program at the Bakersfield Jockey Club, an honor reserved for a few student athletes across Kern County.

In representing the Lady Bulldogs, Dairely Logan was selected to the Bakersfield Jockey Club.

However, for Dairely, she did not want her time at Golden Valley High School to be limited to basketball only upon entering her senior year. With encouragement from her friends on campus, Dairely committed her last year as a Bulldog to being more active and involved at Golden Valley. With that support, Dairely ran for office in Golden Valley’s Associated Student Body (ASB) and was elected as the ASB Historian. “I wanted to be involved in the planning process at Golden Valley,” states a proud Dairely, “I wanted my opinion voiced in the culture and direction of my school.” Dairely was even recognized for her leadership qualities as she was selected by the Kern County chapter of the Optimist Club with the optimist award. In addition to her role in leadership at Golden Valley, Dairely also joined yearbook as the Graphic Design Editor with aspirations of leaving her mark on the Golden Age (official name of the Golden Valley yearbook) and making memories for her classmates. “My goal is to help make this yearbook #BulldogSTRONG by acknowledging the diversity on our campus,” indicates Dairely, “There are a lot of fascinating and cool people on our campus that need to be represented.” With her extremely busy schedule, Dairely has also found success in the classroom by earning a 4.03 GPA in her time at Golden Valley and has future aspirations of attending California State University, Bakersfield to become a nurse practitioner one day. “This is my last year at Golden Valley and I want to make the most of it,” states Dairely. For her desire to be a leader on and off the basketball court and in her commitment to making memories for friends and all students at Golden Valley, Dairely Logan is #BulldogSTRONG. Dairely Logan's leadership was recognized as she was a recipient of the Optimist Award.

What Teachers Think of Dairely:

"Dairely’s zest for life and engaging Bulldog Spirit are just a few of the reasons why she is #BulldogSTRONG! She shows Growth consistently with her positive and upbeat attitude, regardless of what obstacles she has faced. She is also willing to show Pride in her work by going above and beyond to improve and be the best version of herself. Dairely exhibits great leadership in yearbook as this year’s Graphic Design Editor and is able to constantly help her fellow classmates, showcasing her dedication and service to her school. ” Madison Bealessio, English Teacher and Yearbook Advisor, Golden Valley High School

“Dairley represents the best of Golden Valley. She has a 4.0 overall GPA, heavily involved in extracurricular activities and displays visible pride in being a BULLDOG! She generally doesn't allow anything stand in the way of her achieving as much as she can. She is the leader of my team, not because of stats, but because of  everything that a stat can't measure. She is always early to practice, the most focused at practice, willing to accept any role on the team with a supreme level of professionalism not seen in most student athletes. When in the game she gives 100 percent and holds herself accountable. When she is on the bench she is our loudest cheerleader. Through her actions it is obvious she cares about those around her, her school and her future!” Curt Wilson, Head Girls Basketball Coach, Golden Valley High School

"Dairely embodies what it means to be a student leader in every facet. She is a hard worker, responsible, leads by example, easily delegates but in a way that students respect. She is funny and smart and will, no doubt, go on to do great things! I am not -so- secretly hoping she will be become a teacher because she would make an excellent one!"  Valerie Blackl, Activities Director, Golden Valley High School

“Dairely is vivacious. Her positive energy is contagious. She is the kind of person who represents GVHS well because she’s proud, respectful, and gracious.” David Lollar, English Teacher, Golden Valley High School