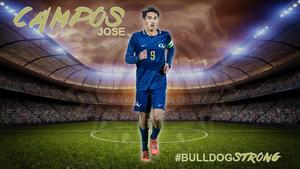 For the tremendous GROWTH he has seen on the soccer pitch for the Golden Valley Soccer Program and in the PRIDE he takes in being a Bulldog, Jose Campos is #BulldogSTRONG. Plans After High School: Jose wants to first attend Bakersfield College for two years to play soccer and then play at a four year university.

What Makes Jose #BulldogSTRONG: Since Jose Campos can remember, soccer has been his life. When he was just two years old, Jose remembers playing organized soccer, but because there wasn’t a league for others of his age, he had to play with 3 and 4 year olds. Throughout his childhood, Jose continued immersing himself in the sport he loves by playing on numerous clubs throughout Kern County of which include Bakersfield Legacy, Bakersfield Blades, New Image, Bakersfield United, and additionally, he played with the Atlas Academy based out of Mexico. “I grew up loving the game of soccer,” indicates Jose, “It’s a major part of my life and allows me to connect with my culture and family.”  For Jose, he not only has embraced soccer through participation, but he is an active fan of the professionals as well. His favorite team is the Arsenal Football Club in the English Premier League and his favorite player is Mesut Özil who is the team’s attacking midfielder and winger. In staying true to his Hispanic roots, Jose also follows Ame’rica of the Mexican League and their star player, Guillermo Ochoa.

For #9 Jose Campos of Golden Valley High School, soccer has always been part of his life. (Photo by Nick Ellis)

However, for Jose, it has been his time playing in the Golden Valley Soccer program in which he has seen tremendous GROWTH, both as a player and as a person. As a freshman, Jose was brought up to the Varsity team during the last two weeks of league play and playoffs. As a sophomore, Jose played solid minutes for the Bulldogs, accumulating 1 goal and 1 assist in the process. In his junior campaign, Jose continued to grow as a player as he netted 3 goals and 7 assists, good for 13 points overall. This year, as a senior, captain, and center attacking midfielder (like Özil)  for the Bulldogs (12-5-2, SYL 6-2-1), Jose has established himself as one of top players in Kern County as he has one of the strongest legs as well. To date, Jose has 7 goals and 12 assists to lead the Bulldogs with 26 points overall as the Bulldogs are poised to make a deep run in CIF Central Section Division 1 playoffs. Jose was also selected to the Bakersfield Jockey Club to represent his team and school. More than his GROWTH as a player, the Bulldog Soccer program, under Head Coach Dominic Othart, has been instrumental in his personal GROWTH. “Golden Valley soccer and the school itself has developed me into a leader that can be successful on the pitch,” states Jose, “I love being a Bulldog because I have had my ups and downs in high school, but the staff has not given up on me as many people have helped me a lot with my grades so that I can play soccer and graduate.” For the tremendous GROWTH he has seen on the soccer pitch for the Golden Valley Soccer Program and in the PRIDE he takes in being a Bulldog, Jose Campos is #BulldogSTRONG.

In a game on the Kern High Network, #9 Jose Campos had an impressive goal that was coined the "Bulldog Blast."

What Teachers Think of Jose:

"Jose is a natural student of the game, knowing when he plays his best game or worst game that there is stuff he needs to work on and develop to better himself for the sport and the team.  He represents our school with pride and respect, he makes sure the GV badge is more important to our players than their own personal gains. Always leading by example on and off the field on how a true Bulldog student should behave.  He has come to live by this year that he is treating all people the way he would like to be treated.” Dominic Othart, Head Boys Soccer Coach, Golden Valley High School

“It has been a pleasure  to watch Jose grow as a soccer player over these 4 years at Golden Valley but most overall to see him grow into such a great young man.  He is always the first to greet you when you see him and ask how your day is going. His leadership on this year’s team is evident on how the rest of the team acts on and off the field. I look forward to great things from Jose in the future.” Robert Haskell, Athletic Director, Golden Valley High School

"Jose Campos comes every day to the library with a positive attitude, willing to help students and staff. Jose has taken pride in his culture by helping me create the Dia De Los Muertos display in the library this past November in an effort at learning and continuing traditions from his culture. Jose is a humble young man with a big heart working hard to accomplish his goals."  Gaby Ruvalcaba, Folklorico Advisor and Library Computer Instructional Technician, Golden Valley High School

“Jose is a student-athlete who demonstrates growth in the classroom and on the field; he does not give up and has proven he will accomplish every goal he sets for himself despite any adversities.  Jose is a model library student who shows pride by helping maintain the library organized and exhibits service when assisting students in utilizing library resources. He has proven to be a valuable asset to the library.” Manuel Sanchez, Librarian and Head Cross Country Coach, Golden Valley High School