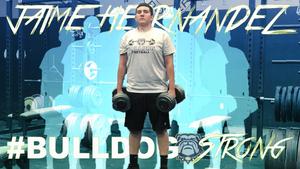 For the commitment he has towards Golden Valley High School in the classroom and on the football field and in his desire to always show respect for others and his country, Jaime Hernandez is #BulldogSTRONG. Plans After High School: Jaime has three options in mind: play collegiate football at Bakersfield College and attend the military.

What Makes Jaime #BulldogSTRONG: Vince Lombardi is an iconic coach in the National Football League (NFL) and is the namesake of the most coveted trophy in sports, the Lombardi Trophy which is given annually to the champion of the Super Bowl. Lombardi and fanatics across the world view football as more than just a sport. ““Football is like life,” Lombardi once said, “It requires perseverance, self-denial, hard work, sacrifice, dedication, and respect for authority.” For junior offensive tackle, Jaime Hernandez, football has taught him a lot in his three years at Golden Valley High School. “Football has taught me discipline, respect, teamwork, and the value of hard work,” indicates Jaime, “Some may doubt Golden Valley football, but as a team we try to prove everyone wrong.” As an offensive tackle, Jaime wasn’t in the limelight or accumulated the stats as other positions, but that was ok for Jaime because commitment to his teammates is most important. One of Jaime’s favorite memories was defeating South this past season because he was the team captain for the game, but more importantly,  it showed him that the program was moving in the right direction. “We proved a lot of people wrong,” indicated Jaime, “Coach Cain is always motivating us to better. Next year we will be bigger, faster, stronger, and win more games.” #60 Jaime Hernandez (Far Right) was Team Captain for the Bulldogs in their defeat of South High School.

Jaime’s commitment to respect is not only seen on the gridiron, but in the classroom as well. This year, Jaime enrolled primarily in Honors and Advanced Placement classes and has earned a 3.56 GPA overall as a student at Golden Valley High School. Furthermore, Jaime is committed to his country as evident in AP US History being his favorite class. “I enjoy learning about the past accomplishments and the people that have shaped our country,” passionately states Jaime, “We haven’t always been perfect, but there are some people who have courageously helped to make our country better.” Additionally, Jaime also has dreams of joining the military after high school. For Jaime, the military provides larger lessons in life including respect, loyalty, commitment, and becoming a better person. “Joining the military has always meant something to me and is a passion of mine,” indicates Jaime, “The ultimate price of service to our country and becoming a better citizen is important to me.” For the commitment he has towards Golden Valley High School in the classroom and on the football field and in his desire to always show respect for others and his country, Jaime Hernandez is #BulldogSTRONG.

What Teachers Think of Jaime:

“Jaime is a true scholar-athlete.  His work ethic is exemplary. He demonstrates daily that he is committed to both academics and athletics. He is truly #BulldogSTRONG." Terri Richmond, Social Studies Department Chair and WASC Coordinator, Golden Valley High School

“Jaime is an outstanding student/athlete who works hard in the classroom and the field. It has been great to watch Jaime improve on his skills each day. With the dedication Jaime has to the off season workouts, I expect big things from him this coming year.” Robert Haskell, Athletic Director, Golden Valley High School

"Hard working, Smart, Funny, Trustworthy and dependable. These are just a few things that describe Jamie. As a new member to the Bulldog Football family and Campus. From day one Jamie made me feel welcomed here. The type of player and kid that makes all the long days and hours we put in as coaches worth it. A bright spot for us that will continue to help us make the changes we need and want in our football program. Proud to say he’s one of my football players."  James Cain, Head Football Coach, Golden Valley High School

“It is a pleasure to write about  a student such as Jaime, he exhibits being #BULLDOG STRONG by excelling both in his academics and athletics. He has shown great leadership qualities in the classroom when performing partner and group assignments and labs. This quality also extends to the football field as a member of the team. I can ALWAYS count on Jaime to be helpful, not only to myself, with other classmates as well. Jaime exemplifies the motto Growth, Pride and Service. I feel Jaime will continue to grow as a leader and push himself to achieve his goals in the future. Great Job Jaime!!” Raelin Villalobos, Chemistry Teacher, Golden Valley High School

“Jaime never complains, always is respectful to the other students and most especially to me. He is reserved, a quiet leader. Jaime is a balanced individual and is always looking towards the positive light in what can be a very difficult time. Jaime is an active listener. Most importantly, he likes a challenge and has no problem applying his native language to projects and oral proficiency exercises. He is #bulldogstrong.“” Larry Bluemel, Modern Language Department Chair and Spanish Teacher, Golden Valley High School