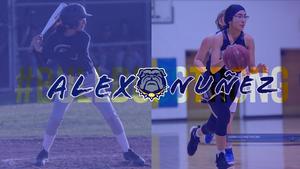 For the PRIDE she takes in playing basketball and baseball at Golden Valley High School and in the positive self-image and confidence that she has in her abilities, Alexandra “Alex” Nunez is #BulldogSTRONG. Plans After High School: Alex wants to attend Arizona State University and major in Business Administration. She wants to own a successful business after graduating college.

What Makes Alex #BulldogSTRONG: From the time she was 6 years old until 7th grade, soccer dominated the life Alexandra “Alex” Nunez as she was a stout goal keeper as she played club for the prestigious Bakersfield Legacy. However, the direction of her athletic career took a pivot when she was a student at McKee Middle School in the 7th grade. During the after school program, her supervisor and coach, Coach Lee, encouraged her to give basketball a shot. “Coach Lee saw some talent in me on the basketball court,” states Alex, “He encouraged me to keep playing and as a result, I fell in love with the game.” Alex quickly became a fan of the Los Angeles Lakers with Kobe Bryant becoming her favorite player. “It was sad to learn about the passing of Kobe and his daughter Gigi,” indicates Alex, “Kobe was a big reason for my love of the game.” As a freshman, Alex had proven that she was more than capable of playing basketball as she was selected to the Lady Bulldogs Varsity Basketball team and played a lot of minutes as the first player off the bench. As a sophomore, Alex was selected by her teammates and Head Coach Curt Wilson to be team captain for her effort on the court and the commitment to being the best teammate possible. “Basketball is such a beautiful game,” smiles Alex, “When the team works together on the court and we are victorious because of our efforts, there is no better feeling.”

As a sophomore, #5 Alex Nunez was selected as Team Captain for the Lady Bulldogs.

It was also at McKee in the 7th grade in which Alex found another sport in which she fell in love with, softball. Again, under the direction and encouragement of Coach Lee, Alex found herself immersed in a new sport, enjoying every aspect of it. Because of her athleticism, Alex was inserted to play shortstop, a position she would also take on the Frosh/Soph Lady Bulldogs Softball team during her freshman year. However, after one year at Golden Valley, Alex had different plans for softball as she wanted to play baseball instead. This year, as a sophomore, she tried out for the Frosh/Soph Baseball team and not only did she make the cut, she earned a starting spot as shortstop, the same position as her favorite baseball player, Hall of Famer and former New York Yankee, Derek Jeter. Alex has earned the respect of her teammates (all boys) and appreciates the opportunity provided from her Head Coach, Cory Miller. “A lot of girls don’t get the experience to play baseball,” states Alex, “I have been fortunate to be able to play at Golden Valley. I have put in a lot of effort to show I belong.” In her first game, Alex went 2-2 with a double, single, RBI, and a run against Mira Monte High School further cementing that she belongs in the sport of baseball. “I love being involved at Golden Valley and being a Bulldog,” comments Alex. For the PRIDE she takes in playing basketball and baseball at Golden Valley High School and in the positive self-image and confidence that she has in her abilities, Alexandra “Alex” Nunez is #BulldogSTRONG.

As a shortstop on the Frosh/Soph Baseball Team, #5 Alex Nunez has proven to be a solid shortstop and hitter for the Bulldogs.

What Teachers Think of Alex:

"Alex Nunez is the true definition of bulldog strong, she is fearless and ambitious! As a sophomore she was selected captain of the varsity girls basketball team because she puts team first and avoids the nonsense that can come with the interaction of so many different types of personalities. In my two years of coaching Alex I have become accustomed to maximum effort from her. She motivates me to believe effort and integrity are the most important features an athlete can have. Overall she is simply a great person!” Curt Wilson, Head Girls Basketball Coach, Golden Valley High School

“Alex is a great all-around baseball player. She is a smart and instinctual baseball player with a great arm. She led the rally in the third inning that broke the game open against Mira Monte. She is a quiet leader that is not afraid to ask questions and constantly wants to find ways to improve.” Cory Miller, Head Frosh/Soph Baseball Coach, Golden Valley High School

"Alex is new to the FFA program and already very involved, she wants to show a lamb next year at the Kern County Fair.  I enjoy Alex in class because she is always on task, asks questions when needed, and volunteers. My favorite was when she wore her Ugly Sweater to the Christmas FFA Chapter Meeting for the Ugly Sweater contest.  Alex has great school spirit!" Cassandra Soberano, Agriculture Teacher and FFA Advisor, Golden Valley High School

“Alex is one of the best students in my 6th period. She is a perfect example of what it is to be #BulldogStrong. She is always giving 100% of her effort in class, she is willing to help her peers around her, and work through the failures she might encounter. ” Fernando Ruiz, World History Teacher, Golden Valley High School

“The first time I met Alex was when she was a freshman on the Varsity Girls basketball team. The Lady Bulldogs went to the Valley Championship the year before and had plenty of returners. Alex showed no fear and competed for playing time. By the end of the season she was the person coming off the bench. Alex is one of those athletes that once they put their mind to it, they will succeed. Her positive attitude makes her a natural team leader. I cannot wait to see what the future holds for her.” Robert Haskell, Athletic Director, Golden Valley High School