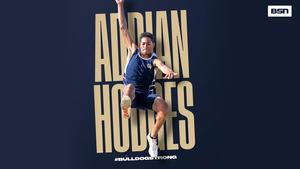 For his ability to fly in the air in the long and triple jumps, lead by example on the basketball court, and be socially active through Project BEST, Adrian Hodges is #BulldogSTRONG. Plans After High School: Adrian wants to attend Fresno Pacific University to compete in track and field. Adrian is interested in electrical engineering, architecture, or business administration as a major.

What Makes Adrian #BulldogSTRONG: At Ollivier Middle School, senior Adrian Hodges developed a strong liking for the sport of track and field. Naturally athletic, Adrian took to running events and excelled, but found his passion in the triple jump and long jump. That passion for soaring in the air followed Adrian to Golden Valley High School and through hard work and determination, he became one of the elite jumpers in all of Kern County. “I pride myself in my work ethic,” states a humble Adrian, “I always try to push myself harder each and every day, pushing myself beyond my limits. I strive to always compete with every jump.” It was in Adrian’s junior campaign in which he jumped into the minds and landscape of Kern County track and field. For his part, Adrian finished in 1st place at the CIF Central Section Southern Area meet in both the long jump and triple jump with marks of 21’10.5 and 43’11 respectively. At the CIF Central Section Valley Championship, Adrian finished in 7th place in the long jump and 5th place in the triple jump as he competed against others that practice on all weather tracks on a daily basis. “I work hard for all the little guys out there that want to be great,” smiles Adrian, “Being a Bulldog makes me want to keep working hard.” As a senior this year, Adrian picked up where he left off last year with a 1st place finish in the long jump (21’7) and 2nd place finish in the triple jump (43’9) at the prestigious EB Relays.

Adrian Hodges is an elite long and triple jumper and was recently featured on the Kern High Network. (Video by Miguel Garcia)

Beyond being an elite jumper, Adrian has demonstrated his athleticism on the basketball court as a four year player on the Golden Valley High School basketball team. Like track, Adrian started playing organized basketball at Ollivier Middle School and because of his work ethic and athleticism, he has been a staple for the Bulldogs in his four years at Golden Valley High School. However, it would be his senior year in which Adrian showed tremendous GROWTH as a basketball player. Statistically, Adrian averaged 7 points, 5 rebounds, and 1 steal a game while guarding the team’s opposing team’s best and tallest players because of his athleticism and the ability to jump high and defend the rim. Moreover, Adrian earned the respect of his teammates and coaches on the way to becoming one of the captains for the Bulldogs. “Adrian emerged as one of my leaders,” states Head Coach Jayson Heard, “He hustles, is coachable, a great teammate and through his actions, we are establishing a winning culture here at Golden Valley centered on integrity and hard work.” At the end of the season, Adrian was selected to the KHSD Annual All Star Basketball Game as the lone representative from Golden Valley High School.

Beyond athletics, Adrian has proven to be a valuable leader on campus. As a four year member of Project BEST, Adrian has taken to the importance of education and social activism while serving his fellow classmates. “Project BEST is important to me because it teaches me and other African American males to embrace and be proud of who we are,” states Adrian, “Project BEST has taught me the valuable lessons of education, participation in clubs on campus, and how to become the best leader that I can be.” Through all of his success as a leader in athletics and on campus, Adrian humbly praises the coaches and staff that have been major influences in his life. “Golden Valley is a special place because there are adults that truly care about you as a person,” indicates Adrian, “They are always coming up with ways to make me, my teammates, and other students on this campus become better people.” For his ability to fly in the air in the long and triple jumps, lead by example on the basketball court, and be socially active through Project BEST, Adrian Hodges is #BulldogSTRONG. Through Project BEST, Adrian Hodges has developed an appreciation of the importance of education and social activism.

What Teachers and Staff Think of Adrian:

"This year, I have had the honor to have Adrian stop by my office during lunch. We have had conversations on a lot of different topics, but most of them were about his life going forward and competing in track in college. I firmly believe that this young man can do whatever he puts his mind to.” Robert Haskell, Athletic Director, Golden Valley High School

“It has been an absolute pleasure to watch Adrian grow as an athlete and young man. His charismatic attitude and never ending desire to get better will allow him to be an extraordinary man after high school. I have the highest hopes and utmost confidence in Adrian and look forward to seeing what the future has in store for him.” Jayson Heard, Head Boys Basketball Coach, Golden Valley High School

"Adrian is one of the most respectful and nice students you could ever meet. Whether we are talking basketball, math, or any topic, he is a pleasure to talk to. Add in the fact that he is a hard worker, and is a great student makes it even better. Adrian is such a role model for other students that I wish they could emulate him and be just like him. Adrian is truly #BulldogSTRONG!"  David Gago, Math Teacher, Golden Valley High School

“Adrian is all you can ask for in an athlete. He is a hard worker and loves to compete. We were looking for a big year, this being his senior year. Adrian has the potential to be the next elite jumper like Lebron! ” Libby Tracy, Track Coach, Golden Valley High School

“I have coached Adrian for 4 years, in both Football and Track. It's hard to find great athletes that are kind, courteous, and coachable.  Although Adrian's senior year has been interrupted by this worldwide epidemic, I am sure he will remain strong, and continue his jumping in college in the near future.” Paul Hernandez, Math Teacher and Head Track and Field Coach, Golden Valley High School