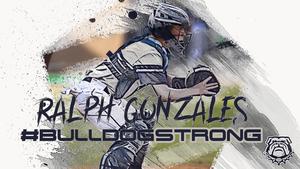 For the GROWTH, leadership, and humility he has shown in just two years as a catcher on the baseball team and a wide receiver on the football team, Rafael “Ralph” Gonzales is #BulldogSTRONG. Plans After High School: Ralph is undecided about the college or university he wants to attend, but he plans on majoring in business administration and hopefully play college baseball.

What Makes Ralph #BulldogSTRONG: Baseball has always been a passion for Golden Valley High School sophomore standout Rafael “Ralph” Gonzales as he has been playing since he was four years old, playing for some of the more prominent Kern County baseball clubs such as the Bakersfield Bullets and the Bakersfield Nomads coached by Golden Valley alumni and baseball greats, Austin Toerner and Josh Hernandez. For Ralph, in his second year on the Bulldogs Varsity baseball program, he has taken to playing the most important position on a baseball diamond - catcher. Catchers are instrumental in making crucial decisions and communicating with the other positions, touching many more aspects of the game of baseball than other positions and for Ralph, it is why he plays the position.  “I started playing catcher because I love getting a chance to make a play on every pitch,” comments Ralph. With the importance of playing such a position comes a certain amount of pressure to perform on each and every pitch, a pressure that has not gotten in the way of Ralph’s performance in his time at Golden Valley High School. As a freshman, Ralph batted an impressive .304 with 28 hits, 13 runs, and 3 doubles and this year, before the season was cut short, Ralph was batting just .238, but was leading the team in at bats, triples, and even saw time on the mound as a pitcher, demonstrating his worth as a great teammate and leader. “Ralph has shown tremendous GROWTH from last year to this year,” states Bulldog Head Coach Mike Gibson, “He has so much more command behind the plate and has embraced the leadership role on the diamond.” Ralph Gonzales has GROWN tremendously as a leader and player for the Golden Valley baseball program. (Photo by Joe Bergman of Kern High Network)

Part of Ralph’s GROWTH as a leader on the diamond can be attributed to the success he saw on the gridiron as a starting wide receiver on the Varsity football team. Coming into year one as Head Coach of the football team, James Cain needed to find guys who could help me make the changes needed in the program and Ralph was one of those guys. “As a sophomore he was asked to play an important role for us,” comments Cain, “Without hesitation he stepped up to the challenge and worked hard everyday for us.” For his efforts, Ralph had 412 yards receiving and failed to get in the zone, but was close in games against East, North, and Tehachapi. Ralph has been working hard in the weight room to improve on his sophomore success. “Next year, a goal of mine is to double the amount of yards and receptions I had as a sophomore and hopefully get in the end zone,” states Ralph, “But more than individual stats, I just want to help my team earn a spot in the playoffs because I believe that we can make a deep run.” In addition to the athletic achievements he has accomplished, Ralph has seen success academically in the classroom earning an overall 3.00 GPA and 3.50 GPA during his sophomore year. In all of his accomplishments on the field and in the classroom, Ralph is quick to express his gratitude for those adults that have influenced him along the way. “Golden Valley is a special place for me because I know I'm surrounded by teachers and coaches that want to help me further my athletic and academic future,” humbly comments Ralph. For the GROWTH, leadership, and humility he has shown in just two years as a catcher on the baseball team and a wide receiver on the football team, Rafael “Ralph” Gonzales is #BulldogSTRONG. What #BulldogSTRONG Means to Ralph: "#BulldogStrong means to take care of business on the field and in the classroom. It also means being respectful to students, staff, administrators on our campus.”

What Teachers and Staff Think of Ralph:

"It has been a real joy to see Ralph GROW as a baseball player this year. He really has increased his knowledge of the game and is a true leader on the diamond. Unfortunately, our season was cut short, but we are excited to have two more years of his leadership and talent on the Golden Valley baseball team” Mike Gibson, Co-Head Baseball Coach and Economics/Government Teacher, Golden Valley High School

“​Ralph possesses the qualities that you want as a coach: leadership, hard-working, and confidence. There are not many student-athletes who can start both as a varsity freshman in baseball and varsity sophomore in football, and Ralph does it at pivotal positions. It's always a joy to see him grow both as a player and young man. Ralph has a very bright future and I look forward to seeing what he can accomplish throughout his years both on the field and in the classroom.” Bobby Hinzo, Co-Head Baseball Coach and Special Education Teacher, Golden Valley High School

"With a season that had ups and downs there were plenty of opportunities to quit on himself and his team. Ralph continued to show up and work hard for us on a daily basis. His Coaches and teammates appreciate his willingness to step up this past season and are excited to have him back for two more seasons."  James Cain, Head Football Coach and Campus Supervisor, Golden Valley High School

"Ralph exhibits the qualities of a #BulldogSTRONG student by taking PRIDE in his craft (school, baseball, football) and striving to be the best he can be in whatever activity he participates in. Further, Ralph reveals his GROWTH mindset daily at GVHS as he attacks each class with an eager willingness to learn. It is obvious that Ralph will find success in whatever he sets his hands to.” Blake Burnard, Assistant Football Coach and English Teacher, Golden Valley High School

Ralph Gonzales has been working out during school closure to improve on the football field and on the baseball diamond.
Print