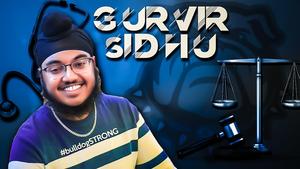 For his desire to be a good citizen and an advocate for social justice through participation in Mock Trial and We The People, Gurvir Sidhu is #BulldogSTRONG. Plans After High School: After high school, Gurvier plans to attend California State University, Bakersfield and pursue a degree in nursing. His ultimate goal is to become a Pediatric Nurse Practitioner.

What Makes Gurvier #BulldogSTRONG: On the Golden Valley High School Student Behavior Matrix, students are challenged to become #BulldogSTRONG by demonstrating SERVICE in the COMMUNITY. More specifically, students can exemplify SERVICE in the COMMUNITY by being a good citizen. For senior Gurvir Sidhu, most of his career as Bulldog has been rooted in an intentional focus at being a good citizen in the classroom, on campus, and in the community. One way in which he has shown this is through his involvement in Mock Trial. After his freshman year, Gurvir found himself unconnected to the campus of Golden Valley, so as a sophomore he decided to join Mock Trial. In just a short time, Gurvir started to see the benefits of Mock Trial as he experienced much GROWTH. “Mock Trial really taught me how to think on my feet,” states Gurvir, “It's a great way to boost public speaking skills and critical thinking. It was a way for me to act and debate while also promoting our Bulldog PRIDE.” This year as a senior, Gurvir helped the Golden Valley Mock Trial Team accomplish some history as they finished in 5th place out of 16 teams with a 3-1 record, the best finish in school history. The success of the team was a credit to the bond that was formed by him and his teammates, an important aspect for Gurvir. “The most memorable moments were the ones where we all weren’t just a team, but were a family,” appreciatively expresses Gurvir, “I remember sitting up on the witness stand, and getting nervous, but relaxing when I saw my teammates supporting me.”

For Gurvir Singh (Middle Left) the bond of his teammates was most memorable as part of Mock Trial at Golden Valley High School.

Beyond the success he saw in Mock Trial, Gurvir demonstrated being a good citizen through his participation in We The People this past fall. As a member of Unit 6, Gurvir delved into the challenges that the American constitutional democracy faces in the 21st Century by examining and going into depth in topics such as Populism. “Studying the constitution in an environment such as We the People, a place where different political beliefs and different backgrounds all come together to decipher the meaning of what it is to be American is truly the most eye opening thing I’ve experienced in high school,” humbly states Gurvir. With such introspect, also came success for Gurvir and his teammates as they finished in 2nd Place for the 21st Congressional District and were able to compete at the state competition in Sacramento. “Being able to engage in civil discourse with my fellow colleagues was a great way for me to understand other people’s perspectives and make me a more well rounded citizen,” comments Gurvir about his time in We The People. As a member of the Unit 6 We The People team, Gurvir Sidhu (2nd Left) helped Golden Valley High School to a 2nd Place finish for the 21st Congressional District.

Additionally, Gurvir demonstrated good citizenship by being part of the KHSD Inclusion and Diversity Committee, the Student WASC Team at Golden Valley High School, the Sikh Honors and Service Committee, and as an executive board member for Leaders in Life and Students Working Against Tobacco, two programs attached to the Kern County Superintendent of Schools. Academically Gurvir has earned a 3.885 GPA while being enrolled in the most rigorous of classes offered at Golden Valley, but it is his commitment to citizenship and social justice in which he has left his mark as a Bulldog. “Social justice isn’t something that can be done by one person, it's something we as a society have to take upon ourselves,” states Gurvir, “With our students being supported by the faculty and staff at GVHS and encouraging us to be leaders in our community, I see movements such as March for Our Lives as inspirational. These movements are so effective in establishing to our youth the importance of their voice.” For his desire to be a good citizen and an advocate for social justice through participation in Mock Trial and We The People, Gurvir Sidhu is #BulldogSTRONG. As an executive board member for Leaders In Life, Gurvir Sidhu (Right) helped make positive change across Kern County.

What #BulldogSTRONG Means to Gurvir: "Being #BulldogSTRONG is about making GROWTH every day by being a better student than you were yesterday. It means having PRIDE in being a Bulldog, uplifting your classmates, and having a positive self image. #BulldogSTRONG is not only for our campus but it's something we can take with us to other parts of our lives.”

What Teachers and Staff Think of Gurvir:

"In AP English Literature and Composition, Gurvir is wonderfully detail-oriented, which is important and useful in a class where an author's overall meaning can hinge on little more than a word or two.  He is always supportive and encouraging to his classmates during class discussions and presentations. His questions are smart, insightful, and a benefit to everyone when discussing poetry, prose, or novels. ” Blake Bastain, English Teacher, Golden Valley High School

“Gurvir Sidhu is an outstanding example of being #BulldogSTRONG. Truly he is a shining exemplar of being GPS in class, on campus, and around our community. In class he is a hard worker who works hard to make sure he turns in high quality work, he is extremely supportive of his classmates in We the People, and intellectually he shines as well. In the community and around campus I cannot hope to keep track of all his activities but he has excelled in countless other activities/clubs. Gurvir is an outstanding young man with a bright future ahead of him. ” John Hansen, We The People Coach and Economics and Government Teacher, Golden Valley High School

"Gurvir is not only an insightful student who thinks outside the box, but I am so appreciative of his conviction to his beliefs.  He has opinions that are well researched, and he backs up those convictions with action. He serves on committees, reaches out to local leaders and works for change. I am proud of the man that he is and look forward to what he will do in his future. " Sheryl Cleveland, Math Teacher, Golden Valley High School

“Gurvir is a compassionate person.  He has a great deal of empathy for others.  One of his most consistent traits is his ability to see any issue from the perspective of others and to understand how they will feel and how they might be impacted.  He excels at mediation and compromise. I love having him as a student.” Terri Richmond, Social Studies and WASC Chair, Golden Valley High School

“Gurvir is one of the most genuine, dedicated and #BulldogSTRONG young men that I know. On the Mock Trial team I have watched Gurvir grow from a scared sophomore who wasn't sure that he would be any good on the team, to a confident senior who problem solves with his teammates and helped those who were new to the team. Gurvir always steps up to help anyone that he can, whether it be with figuring out a confusing part of the case or selling lots of Tahoe Joe tickets for a fundraiser. He perseveres during difficult times and is always encouraging to those around him. ” Trisha Brown, Social Studies Teacher and Mock Trial Coach, Golden Valley High School