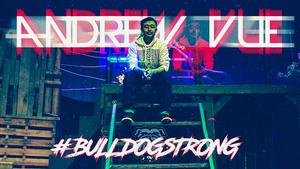 For his behind the scenes efforts in theatre, openness to new experiences, and genuine desire to serve others, Andrew Vue is #BulldogSTRONG. What Makes Andrew #BulldogSTRONG: Many times in performing arts, it is the actors, directors, and writers that take in the glory and the fame for a performance. However, behind the scenes there are individuals that selflessly work hard so that others may shine and sparkle on the stage or in front of the camera. Such is the case for Golden Valley High School senior Andrew Vue. In just two years in the Bulldog Theatre Company, Andrew has committed himself to serving his classmate in the various roles in which he has performed: stage manager, production manager, technical director, running crew, tech crew, lighting crew, and helping out others in costumes and props when they needed assistance. “I have learned the value of team-building through technical work,” state Andrew about his various roles, “I have also learned time management, differences in the types of wood pieces there are, and how to properly use paints, tools, and machinery.” One of his most memorable moments was working behind the scenes for Once on this Island, an outside performance that required a lot of moving parts with lights, soundboards, wires, and mic checks that were atypical of being inside. “This experience brought us together. It was a moment bigger than myself.”

Andrew Vue (Right) has found a home in the Bulldog Theatre Company and doesn't mind the behind the scenes work.

Furthermore, Andrew has even had a few minor roles in some plays of which include the popular Peter and the Starcatcher.  “It was honestly super fun to see both sides of the production because as a technician we don’t get to know the actors on a personal level,” comments Andrew, “Being able to understand their hardships and needs helped me to be a better technician and help them out when they need it backstage.” In addition to participating in theatre, Andrew has also spent time in cross country and the Science and Medicine Club, but for Andrew, theatre has provided him a sense of purpose, the courage to try new things, and the ability to be himself. “Theatre has always been a place where I could be myself and know that there are friends in class that have my back,” states Andrew, “All students at Golden Valley should broaden their horizons in high school because there is so much happening besides going to class and going straight home. Students should try to find time to meet new people that make them better people.” For his behind the scenes efforts in theatre, openness to new experiences, and genuine desire to serve others, Andrew Vue is #BulldogSTRONG. Though he largely serves behind the scenes, Andrew Vue (Left) has had minor roles such as in the play Peter and the Starcatcher.

What #BulldogSTRONG Means to Andrew: "#BulldogSTRONG means that even when you are at your limits, try to push on because life will always be better. It also means that we are to treat other kindness and respect. ”

What Teachers and Staff Think of Andrew:

"Vue! And yes, everyone calls him ‘Vue’ -- has the quirkiest sense of humor and the best facial expressions to demonstrate if he liked (or didn’t like) something I was saying. Also, he was the kindest person – supporting another student with extra chocolates on Valentine’s Day to remind her she’s not alone. I am proud to have had Vue in my class, and I know he will be a light in this community for years to come!” David Lollar, English Teacher, Golden Valley High School

“Andrew is an absolutely amazing human being. He's always the first to help, and has an impeccable work ethic. His peers genuinely like and respect him. As part of the Bulldog Theatre Company, Vue was a leader. He was our Scene Shop Manager, Student Technical Director and Stage Manager for numerous shows, and was my right hand man. He will be missed next year! ” Sheila McClure, Theatre Director and Video Production Teacher, Golden Valley High School

"Vue is an outstanding young gentleman. He continuously demonstrates service to his fellow classmates by helping others without hesitation and without seeking anything in return. Vue also exemplifies pride. His work ethic is impressive, always going above and beyond what is expected of him. Thank you for being an exemplary student and young man. Andrew truly is #bulldogSTRONG"  Monica Beavers, Theatre Teacher, Golden Valley High School

“I had Andrew as a sophomore in my PE class and now a senior in my Strongbody class, and Andrew is one of my top students! Andrew has always been an outstanding student that possesses strong leadership qualities. He always has a positive attitude and relates very well with his fellow classmates and teachers; he is indeed one of our top students at Golden Valley!” Bill Richardson, PE Teacher, Golden Valley High School

“Andrew always came to my class on time, ready to learn with a great attitude.  He radiated enthusiasm and has a great sense of humor.  He was one of the most well-liked and personable students I had and I know he will be successful in the future.” Marianne Parsons-Anderson, Social Studies Teacher, Golden Valley High School