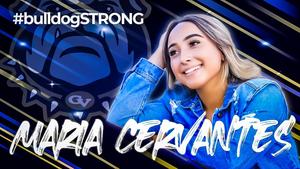 For her leadership and dedication as team captain for the elite, nationally ranked Golden Valley Color Guard Program and the PRIDE she has in being a Bulldog, Maria Cervantes Murillo is #BulldogSTRONG. What Makes Maria #BulldogSTRONG: The Color Guard Team at Golden Valley High School has established as one of the premiere programs in Kern County, state, and the nation. Since 2017, they have finished in 1st in a number of elite competitions throughout the state and at the time of the school closure, they were ranked #8 in the nation. Key to the success of this years’ team was the leadership and dedication of their team captain, Maria Cervantes Murillo. Maria has been in color guard for seven years as she competed as a young adolescent at Ollivier Middle School. “I decided to join color guard when I was in 5th grade and attended an Ollivier orientation,” comments Maria, “When the girls came out and performed for us, I became fascinated with the idea of flipping a flag, but I really wanted to flip a rifle.” Maria’s fascination quickly turned into passion as she has spent the past seven years dedicating herself to perfecting the craft. Sometimes Maria and her teammates would spend 12 hours a day practicing - either in the early hours of the morning or late at night in the Golden Valley cafeteria. Furthermore, Maria and her teammates would practice with bumps, bruises, and mental fatigue. “What some people may not understand about color guard is that it is very hard mentally, physically, and is extremely time consuming,” states Maria, “One must have dedication to endure the grind of color guard.” Throughout the pain and dedication of color guard, Maria has developed friendships with her teammates that will forever be part of her experience at Golden Valley High School. “Even though we work hard to compete and win, we still manage to have an unshakable bond filled with fun,” smiles Maria, “We do a lot of pranks that include picnics in hallways and lots of silly string. The memories of travelling out of town and developing friendships will always be with me.” Because of her dedication and commitment, Maria Cervantes Murillo was team captain for the nationally ranked Golden Valley Color Guard program.

In addition to her participation in color guard, Maria also played volleyball for two years that brought new faces, friendships, and coaches into her life. Academically, Maria thrived as she earned a 3.136 GPA while being enrolled in College Prep Classes. In all of her accomplishments and successes, Maria is proud of being a Bulldog and attending Golden Valley High School. “My experience at Golden Valley was great. Of course, I had some bumpy moments along the way,” comments Maria, “Whether it was having trouble with some classes, not understanding the work, or me procrastinating, I was able to meet new teachers and friends that helped me see my potential and that I am capable of accomplishing any goal that I set.” For her leadership and dedication as team captain for the elite, nationally ranked Golden Valley Color Guard Program and the PRIDE she has in being a Bulldog, Maria Cervantes Murillo is #BulldogSTRONG.

Maria Cervantes Murillo and her teammates performed on March 7, 2020 at Golden Valley High School, just before the school closure. At the time, the Bulldogs were ranked #6 in the nation.

What Teachers and Staff Think of Maria:

"I have known Maria since she was in middle school, and I have never met a performer whose smile is so contagious. She is kind, helpful, and passionate about what she does both on and off the performance floor. Maria served as one of our captains this school year and led her team with their best interest in mind— always carving the path for the next generation. Her family plays a huge role in her life, which only helped create the independent young lady she is today. Maria helped build the Golden Valley World Class color guard. She will always hold a very special place in our hearts. I love this kid, and I am so excited for her future. I know she’s going to continue making an impact, anywhere she goes.” Nancy Cisneros, English Teacher and Color Guard Coach , Golden Valley High School

“Maria is one of the Colorguard Captains on our phenomenal Colorguard team! She is respected by her peers and is very dedicated to Colorguard. I have seen her show tremendous GROWTH over the years and has matured into a very respectful young lady. This year especially, she has been a great mentor to her fellow peers and always gives great feedback to other members on the Colorguard team. I know that whatever she does in the future, she will be very successful!” Kristen Torres, Band Director, Golden Valley High School

"Maria is a very special GV student and holds a spot in my heart. If there is anyone that has the enthusiasm, the positive vibe and a strong sense of determination, it is Maria.  I have seen her grow throughout her years at GV and let me tell you, she is an amazing human being and possesses a great GV bulldog spirit.   She takes great pride in her learning and her dedication as a Golden Valley Color Guard member. She shows respect to everyone and has a welcoming spirit that till this day greets with a smile and a ‘good morning.’  She is a perfect example of a GV bulldog.  Maria is determined, strong, and a great citizen and her smile along with the person she is will be missed dearly."  Eva Perez, Spanish Teacher, Golden Valley High School

“Maria Cervantes Murillo is a really great student in class who showed a lot of Growth as a learner in Government class with me. During class she was active in her learning, helping others with their learning, and became a leader during her group assignments. Also, I know Maria has been passionate about Color guard and has been one of the leaders of the amazing Bulldog Color guard team and has shown a ton of school spirit while devoting herself to her team. ” John Hansen, Government/Economics Teacher & We The People Coach, Golden Valley High School

“Maria is an exceptional art student. She constantly went above and beyond when creating her artwork. She is a leader both in and out of the classroom and never hesitates to give another classmate a helping hand. Maria has shown tremendous growth these past few years and is a wonderful example of what it means to be #Bulldogstrong.” Bianca Castillo, Art Teacher, Golden Valley High School