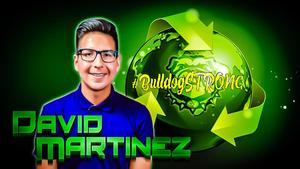 For his deep desire and commitment to SERVE his community and his classmates through social activism and involvement in ASB, David Martinez is #BulldogSTRONG. Plans After High School: David has committed to attending the University of California, Santa Cruz and majoring in business managerial economics to then head in the direction of marketing.

What Makes David #BulldogSTRONG: The American cultural anthropologist Margaret Mead once commented the following sentiments about social activism, “Never doubt that a small group of thoughtful, committed people can change the world. Indeed, it is the only thing that ever has.” For Golden Valley High School senior David Martinez, these words have never been more true as SERVICE to his community has become a definitive characteristic for him as a Bulldog. As a member of the Greenfield Walking Group for the past two years, David has committed himself to being socially active in Kern County in order to improve his community. Belonging to this group has provided David with the necessary voice to provide insight to local government so the see the problems plaguing Kern County: drug abuse, niccotine addiction, suicide, lack of healthy living conditions, poverty, and many other factors that seem to be unnoticed by those in ower. “For me personally, this group is important because it gives me a voice,” passionately states David, “Sometimes those in positions of power fail to understand the viewpoint of teenagers, but we are the ones that are having to live and deal with some of the issues that are not being fixed or addressed.” One of the major issues David and other members of the Greenfield Walking Group have committed to is improving sidewalks and walking conditions for students of all ages as they attend school every day. Additionally, David and the Greenfield Walking Group have worked with local Kern County Supervisor Zach Scrivner to have sidewalks installed at such locations as Ollivier Middle School and other locations. “The Greenfield Walking Group is designed for everyone living in Greenfield to take an active role in improving their life,” states David, “I would like to see the people of the community stand as one to fix some of the glaring issues and let their voices be heard.”

As a result of the positive experience David had in community service, he took some of that energy to student leadership at Golden Valley as a senior. In his only year involved with ASB, David was elected as ASB Vice President in order to provide memories and make the 2019-2020 school year the best for the students at Golden Valley High School. For David, his goal was rather simple - make others feel loved and wanted. “Personally, I am naturally a shy person and I know the importance of being valued,” humbly states David, “From our ASB leadership class shirts, the science and medicine club shirt, to even the clothes that I put on a normal day, I walked the hallway with an open heart to everyone making sure to make at least one person smile.” In addition to SERVING in student leadership, David immersed himself in a wide array of clubs and activities including the following: Science and Medicine Club, Interact Club, Honors Society, French club, AP Finance Club, GATE Club, Summer Geology program at Ridgeview, RYLA, We The People, Art Club, S.W.A.T (Students Working Against Tobacco), CAL Walks, and WASC. In his “spare” time, David earned a 3.98 cumulitve GPA and will be heading to the University of California, Santa Cruz in the fall to major in business managerial economics. With all of the accolades and accomplishments that David has earned, community service and helping others is at the core of who he is. “Community service is important to me because it just leaves you with the feeling that no matter what change you made, big or small, YOU made a difference.” For his deep desire and commitment to SERVE his community and his classmates through social activism and involvement in ASB, David Martinez is #BulldogSTRONG.

David Martinez (2nd from far left) has been a student leader at Golden Valley High School through his involvement with S.W.A.T. (Students Working Against Tobacco)

What #BulldogSTRONG Means to David: "Being #BulldogSTRONG for me means to put up a fight for the greater good. There have been so many times in my high school career where I've felt that I couldn't do something and wanted to give up. I’ve learned that if you put your mind to it, nothing is impossible. Putting up a fight doesn't only apply to yourself but to your surroundings as well. Find your voice and learn how to use it. Use your voice to, for example, organize a park clean up, fund enough money to install crosswalks to parks, start the construction of sidewalks in an underrepresented community, but most importantly, use your voice to love, to unite. That is what being #BulldogSTRONG means to me.”

What Teachers and Staff Think of David:

"David is such a good hard worker student that is involved in many extracurricular activities, still manages to give it his all. Sweet, smart, reliable, resilient and responsible young man that is a pleasure to have around. I expect big accomplishments from David because he has everything that is need it to make it: Motivation, Desire, Responsibility , and Thrive.” Yaneli Bravo-Ceja, Spanish Teacher, Golden Valley High School

“David’s quiet demeanor belies the creative, intelligent, and kind person that he really is. Hard-working and empathetic, are among just two, of many, positive adjectives that can be used to describe him. He has been an asset to ASB this year and I know has worked hard as president of Science and Medicine. Golden Valley is a better place for having him walk on our campus for the last 4 years.” Valerie Black, Activities Director, Golden Valley High School

"David demonstrates his #BulldogSTRONG spirit because he continually thinks of others first. He is kind, thoughtful, and has a natural sense of empathy that contributes to his wonderful personality.  He also has a dry wit, which can bring some humor to the classroom."  Terri Richmond, Social Studies Department Chair, Golden Valley High School

“I had the pleasure of getting to know David during his sophomore year when he was in my AP European history class. What I observed from David, was his dedication to always do his very best individually, but he was also a great “team player” who worked well with his classmates, too. While it has been a few years since David was my student, every time I would see David on campus, he always had a big smile on his face and would greet me with a warm “hello”-a greeting from David would make my day!” Tracy Costa, Social Studies Teacher, Golden Valley High School