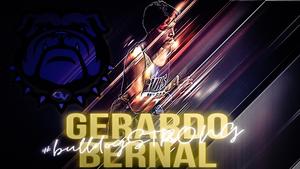 For the tremendous GROWTH he has shown in cross country and in the classroom by working through failure and always giving 100%, Gerardo Bernal is #BulldogSTRONG. Plans After High School: Gerardo’s plan after high school is to attend Cal Poly San Luis Obispo - his dream school since the 8th grade. Gerardo has aspirations of becoming a software engineer.

What Makes Gerardo #BulldogSTRONG: Some of the key behavior expectations of being #BulldogSTRONG at Golden Valley High School is the ability to demonstrate GROWTH by working through failure and always giving 100%. For Senior Gerardo Bernal, he has been able to model those specific expectations as a cross country runner for the Bulldogs. In elementary and middle school, before coming to Golden Valley, Gerardo was not much of an athlete, but upon joining cross country, he quickly found passion in running. “I think the most rewarding aspect of cross country is seeing the progress I have made,” comments Gerardo, “Especially because I was not much of an athlete prior to high school. The hard work of training and the confidence that my coaches have had in me has made provided me with much PRIDE to run at Golden Valley.” For his hard work and commitment to always giving 100%, Gerardo has established himself as a formidable runner for the Bulldogs with a personal record of 18:34 for a three mile run and in most of the races, his average is around 19:30. Furthermore, Gerardo has been recognized for his efforts as he was a recipient of the Bakersfield Jockey Club Award, a prestigious community award that recognizes athletic excellence across Bakersfield. Additionally, Gerardo has been recognized by his teammates and coaches at Golden Valley as he was awarded the Most Inspirational Award as both a sophomore and junior.   As a Senior, and with the hope that high school athletics return in December, Gerardo is hopeful that he can continue to GROW by improving on his times, but also enjoy the remaining months of his high school career with his teammates. “The most memorable moments for me as a runner at Golden Valley are the times spent before and after the races with my teammates,” humbly states Gerardo. Beyond his accomplishments as a runner for the cross country team, Gerardo has seen tremendous success in the classroom. Academically, Gerardo has earned a 3.712 GPA while being enrolled in most rigorous classes at Golden Valley High School of which include Advanced Placement (AP) and Honors classes as well  involvement in the Project Lead the Way (PLTW) program which is designed for students interested in careers in math, science, or engineering. Gerardo was also involved in the AVID Club his sophomore year, a club designed to provide opportunities for students to visit college campuses as well understand the college admission process.  “The teachers and experiences I have had at Golden Valley have provided me with the necessary tools and skills to be successful in college, my career, and in my life in general,” graciously states Gerardo. For freshmen, sophomores, and juniors at GVHS, Gerardo suggests to be involved in order to make the most out of the high school experience. “Take up something fun that the school has to offer,” comments Gerardo, “It could be a class, club, or sport - if you enjoy it, get involved - trust me it will make your experience at Golden Valley so much more enjoyable.” For the tremendous GROWTH he has shown in cross country and in the classroom by working through failure and always giving 100%, Gerardo Bernal is #BulldogSTRONG. Gerardo Bernal (right) was was recognized by the Bakersfield Jockey Club for his efforts in cross country.

What Teachers and Staff Think of Gerardo:

“Gerardo Bernal is a model student-athlete; he is the embodiment of hard work and dedication. In his first year of cross country, Gerardo was the only freshman who attended and never missed 5:00 AM practices. As the varsity team captain, he demonstrates his leadership skills by taking charge and setting up workouts with his teammates during distance learning.” Manuel Sanchez, Head Cross Country Coach and Library Teacher, Golden Valley High School

"I had the pleasure of being Gerardo Bernal's GATE English teacher his freshman year. Early on, it was clear that Gerardo was #BulldogSTRONG. As a freshman, Gerardo was a conscientious student, a positive contributor to class and group discussions, and a leader in the classroom. He has continued that trend; instead of opting for an easier schedule this year, he is taking one of the most rigorous schedules I have ever seen. Despite the learning challenges of this pandemic, Gerardo continues to pursue his goals and show that he is indeed #BulldogSTRONG.” Jamie Contois, English Teacher, Golden Valley High School

“Gerardo is BulldogSTRONG because he demonstrates a desire to grow as a student. He challenges himself academically and works very hard. In addition, his calm approach to learning is a model for others to follow.” Terri Richmond, Social Studies Department Chair and WASC Coordinator, Golden Valley High School

"What makes Gerardo #BulldogSTRONG is his dedication as a student and as a person.  He reflects qualities of a great role model  where responsibility, respect and consistency are his core values.  I had the privilege to have Gerardo in Spanish class and let me tell you, his eagerness to understand beyond what is given to him justifies his commitment throughout his academic learning.  Gerardo is not a student that sticks out in the crowd for being loud or noisy but more of a student that carries himself with maturity and gives his 100%.  Not only does he work on perfecting his academic skills but he also strives to help others that struggle and provides them with motivation.  Gerardo is deserving of being  #BulldogSTRONG."  Eva Perez, Spanish Teacher, Golden Valley High School