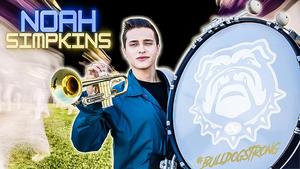 For his talents and leadership as a gifted trumpet player in the Bulldog Brigade, bass drum player in GVHS Drumline, and in the genuine appreciation he has for the staff that have influenced his musical GROWTH at GVHS, Noah Simpkins is #BulldogSTRONG.

Plans After High School: Noah’s plan after high school are to obtain his Associates of Science Degree in Administration of Justice at Bakersfield College and then transfer to California State University, Bakersfield to receive his Bachelor of Arts Degree in Criminology with the long term goal of becoming a police officer.

What Makes Noah #BulldogSTRONG: When Golden Valley High School Senior Noah Simpkins was in the fourth grade at Mountain View Elementary School in Visalia, CA, he was first exposed to the intricacies of music because he had a separate class in which learned how to count and read music. Like most elementary school students that participate in a music program, after learning how to read and count music, Noah’s first musical instrument was the recorder where he impressed his teacher and classmates with playings of the classics such as “Mary Had a Little Lamb”, “Old McDonald Had a Farm,” and “Hot Cross Buns.” With the sound that he was producing from this little plastic recorder, Noah developed a passion for music causing him to join the band as a fifth grader where he learned to play the trumpet, an instrument that has not only been his lifelong passion, but has symbolic of his transformation into a leader as a four year member of the Bulldog Brigade at GVHS. “The trumpet is my absolute favorite instrument because it’s a major part of my life,” passionately states Noah, “Even though I’ve been playing the instrument for so long, I still love it just as much as I did when I first started playing.  Brass instruments will always be what I prefer because I love their sound and their range, the possibilities are endless when playing the trumpet.” Noah’s passion for the trumpet has allowed him to become the Trumpet Section Leader at GVHS, an important position that requires responsibility, coordination, and leadership in the midst of competition season or under the Friday night lights during halftime of football games. “Not only do you learn how to play and perform while being part of the band, but you learn to take initiative, have integrity and importantly, you learn to have individual responsibility in the grand scheme of the entire band,” states Noah. Through hard work and passion for the trumpet, Noah Simpkins (Far Left) was selected as the Trumpet Section Leader for the Bulldog Brigade. (Photo by Joseph Estrada)

In addition to his talents with the trumpet, Noah is also active in the Spring with the GVHS Drumline as he plays the bass drum. Through drumline, Noah continues to work on his craft as a musician, further challenging his skills and talents in different ways. “We work as hard as anyone else would if they are competing in something,” comments Noah,  “Most importantly, we work hard together. The band, the drum-line, the color guard, we all work together to put on a good performance for any audience we play in front of.” Additionally, Noah is quick to recognize that the coordination and hard work of the band and drumline is a result of the positive influence and inspiration of Band Director Kristen Torres and the rest of the coaches. Through grueling rehearsals and practices in the heat of summer and the cold of winter, Torres and the coaches push Noah and the rest of the band to be the very best that they can be. “Ms. Torres has believed in me from the first time I stepped into her band room,” humbly states Noah, “She has challenged me and made me a better and more responsible person.  She showed me that I am a leader, that I am capable of doing anything that I set my mind to.” For his talents and leadership as a gifted trumpet player in the Bulldog Brigade, bass drum player in GVHS Drumline, and in the genuine appreciation he has for the staff that have influenced his musical GROWTH at GVHS, Noah Simpkins is #BulldogSTRONG. Noah Simpkins is also an important contributor to GVHS Drumline as evident with his skills on the bass drum. (Photo by Joseph Estrada)

What Teachers and Staff Think of Noah:

"Noah is an amazing leader for the Bulldog Brigade. He is the first to volunteer to help, no matter what section needs extra support. Noah is simply always there for others. He takes his job seriously as Trumpet Section Leader and is always there to help anyone with their music if they need it. He is an excellent example of being #BulldogSTRONG and I am extremely proud of him. I cannot wait to see what he does in the future and I know that whatever direction life takes him, he will be a SERVICE to many.” Kristen Torres, Bulldog Brigade Band Director, Golden Valley High School

“Noah has been a source of positivity and excellence in our program. He is always punctual, courteous, and ready to learn. As a leader has been inspiring to his peers and coaches.” Joshua Dunbaugh, Visual Caption Head for the Bulldog Brigade, Golden Valley High School

"Noah is a hard worker in the classroom as he always gives 100%. He is also very good about asking questions in order to make sure that he is doing accurately. Noah pursues his education with passion and is the epitome of being #BulldogSTRONG."  Lisa Irish, English Teacher, Golden Valley High School

“Noah has been an excellent student during distance learning. He has great attendance, participates throughout the whole 90 minutes, and asks questions that show his level of engagement, in which he is leading the way. He is the perfect example of the #BulldogSTRONG! He is an outstanding young adult, and I am lucky to have him as a student!” Jason Goad, Math Teacher, Golden Valley High School

“Noah has achieved great success during this difficult time of distance learning. He has maintained solid grades and has been a real asset to his teachers and classmates. Noah is a gifted musician with his ability to play both the trumpet and bass drum at an advanced level while also leading the Bulldog Brigade as Trumpet Section Leader. We are extremely fortunate to have Noah Simpkins as a student at Golden Valley High School as he represents what it means to be #BulldogSTRONG.” Kyle Wylie, Assistant Principal of Administration, Golden Valley High School