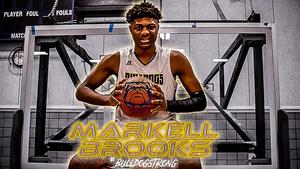 For the deep love he has for his late father, his desire to keep his memory alive through playing basketball, and in the gracious attitude he has towards the staff and coaches of GVHS, Markell Brooks is #BulldogSTRONG. Plans After High School: Markell wants to play collegiate basketball and earn his degree in psychology and become a licensed psychologist because he wants to help people that are struggling with their mental health.

What Makes Markell #BulldogSTRONG: In 1984, on his fifth album Ego Trip, which was released on Mercury Records, rapper Kurtis Blow wrote and performed the song “Basketball” which was an homage to some of his favorite players that laced up their sneakers and braced the hallowed grounds of a basketball court. Blow makes specific reference to Julius “Dr. J” Erving, Moses Malone, Wilt Chamberlain, Jerry West, Magic Johnson, Larry Bird, Bernard King, and 18 other of the NBA’s greatest stars of all time because they influenced him to “love that basketball,” as the chorus of the song indicates. While certain individuals play and love sports because of inspiration derived from superstars, like Kurtis Blow, others play because of a deeper, more meaningful purpose. For Golden Valley High School junior forward/center Markell Brooks, his love of playing basketball comes from his desire to honor the memory and legacy of his late father. On November 11, 2005, his father, Marcel Lincoln, was shot and killed forever leaving a void in Markell’s life. In order to fill that emptiness, Markell took to the basketball court and through layups, jump shots, blocked shots, and now dunks, the calming presence of playing basketball allows his late father to always be with him. “Basketball is my favorite sport because my father loved basketball,” humbly states Markell, “His spirit is always with me and he motivates me to do all that I can because life isn’t promised, so we have to live the one we got to the fullest. Everything I do is for his memory - he is part of my story.”  Markell’s love of basketball was demonstrated last year as a sophomore leader on the Varsity basketball team. After getting off to a relatively quiet start in his first 10 games on Varsity as one of the youngest on the court (5.2 points per game, 7.8 rebounds per game, and 2 blocks per game), Markell established himself as a dominating presence (6’5) in the paint in the final stretch of the season. Over his last eight games, Markell saw drastic increases in key statistical categories as he averaged 11.8 ppg, 12.6 rpg, and 3.5 bpg which placed among the top performers in a competitive South Yosemite League (SYL). In addition to his overall output, Markell led the Bulldogs to key victories over rival and perennial SYL Champion Ridgeview and a sweep of one of the most solid programs in Kern County, Tehachapi. Markell would finish last season with 8.1 points per game, 9.9 rebounds per game, and 2.2 blocks per game. #23 Markell Brooks showed tremendous GROWTH for GVHS in his first year on Varsity as a Sophomore becoming one of the premiere players in the SYL.

On top of the success he has had on the basketball court, Markell has started to blossom on the football field as a wide receiver. Last year on the JV team, Markell earned a starting spot at wide receiver and with his length, athleticism, and growing confidence at the position, he began to make impressive catches that are worthy of being featured on You Got Mossed. In Spring, Markell dedicated himself to getting faster for both football and basketball by participating in track as a sprinter, hurdler, and jumper, but due to Covid-19, he was unable to ever compete in an event because of schools turning to distance learning. Beyond the accolades and accomplishments he has been blessed with in his time as a Bulldog, Markell is truly appreciative for the support and encouragement he has received from various staff members and coaches. “Golden Valley High School is special to me because there are so many moments in which wise teachers and coaches have provided me with talks and speeches that have influenced me,” indicates Markell, “This school has changed my life for the good and has been the necessary turning point I have needed.” For the deep love he has for his late father, his desire to keep his memory alive through playing basketball, and in the gracious attitude he has towards the staff and coaches of GVHS, Markell Brooks is #BulldogSTRONG.

Whether as a wide receiver on the football field or stretch forward on the basketball court, Markell Brooks is one of the premiere athletes at GVHS and takes PRIDE in being a Bulldog.

What #BulldogSTRONG Means to Markell: "BulldogSTRONG means to me to be generous and kind to your fellow peers and to do as much as you can to make a difference in the community.”

What Teachers and Staff Think of Markell:

"Markell Brooks is a passionate young man with a high ceiling of potential. Markell is the ideal teammate that always puts others above his individual accolades. Through his ability to overcome obstacles, Markell shows the potential to be a great leader on and off the court. ” Jayson Heard, Varsity Boys Basketball Head Coach, Golden Valley High School

“It has been fun watching Markell grow both on and off the field and court these last couple of years. From starting at wide receiver on the JV football team to a starting spot on the varsity basketball team, he has shown great growth in attitude and athletic ability. He has also worked hard during this distance learning to get his grades up and keep them up so when we get to play again, he will be eligible. At GVHS, we expect big things from this young man in the future.” Jayson Heard, Head Boys Basketball Coach, Golden Valley High School

"During distance learning, Markell has shown great growth in my class. Not only did he diligently work hard to increase his grade, but he also took pride in his learning and worked on maintaining a positive attitude. I have enjoyed getting to know Markell (virtually) this year and can see how his positive mindset and #BulldogSTRONG attitude have allowed him to be engaged, goal-oriented, and a positive spirit in the online world. Markell shows that perseverance, on or off the basketball court, leads to great gains academically and personally."  Madison Bealessio, English Teacher and Yearbook Adviser, Golden Valley High School

“As a football coach I’m always looking for the quality young men to join my program. Someone who will represent not only the football program in a positive light, but also our school and themselves as well. That’s what you get from Markell Brooks. A quality young man who is smart, reliable and extremely athletic. With the ability he has its hard to call him a Basketball player or a Football player. So us coaches just call him an athlete. As coaches we constantly talk to our guys about being Student Athletes. Markell takes his role as a student seriously and we are proud of the attention and effort he has given in the classroom and the strides he has made. He has a bright future and I’m excited to see him continue to grow as a person and an athlete.” James Cain, Head Football Coach, Golden Valley High School

“Markell’s story and his ability to overcome obstacles that come his way is what makes him #BulldogSTRONG to me. Markell inspires me to be the best administrator that I can be and live life to the fullest. We are fortunate to have Markell as a student leader on our campus and his selfless spirit and desire to help others is truly remarkable. We have no doubts that Markell will continue to represent GVHS with respect and dignity in the classroom, on campus, and in the community.” Kyle Wylie, Assistant Principal of Administration and #BulldogSTRONG Hype Man, Golden Valley High School