TEACHER OF THE YEAR: Judiah Hopkins 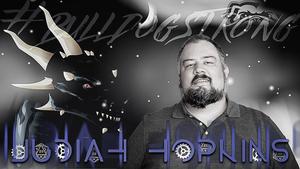 For his deep commitment to the success of ALL students at Golden Valley High School, Judiah Hopkins is #BulldogSTRONG and our Teacher of the Year. Teacher of the Year: Judiah Hopkins

What Makes Mr. Hopkins #BulldogSTRONG: In the fall of 1995, Judiah Hopkins entered high school as a freshman at Clovis High School and suffice to say, this year as well as his subsequent sophomore year, were marred with very marginal academic success and with that, he was not identified as a GATE (Gifted and Talented Education) student. Deep down, Hopkins knew that he had the ability to succeed academically with other high achieving students, but admits he was down after not being identified for the GATE program. “My first few years of high school were tough for me academically,” comments Hopkins, “But things changed my junior year.” As a junior, Hopkins enrolled in Advanced Placement (AP) courses and started to surround himself with friends and classmates that supported and encouraged him to achieve greatness. As a result of the positive influences that surrounded him, Hopkins elevated his academic confidence and demonstrated that he was more than capable of success as he took five AP exams his Senior year and passed each one of them with four of them being a score of 5 which is the highest one can get on an AP exam. Hopkins also took to academic competitions as well as he competed in the prestigious Science Olympiad, Odyssey of the Mind, and Academic Decathlon. In addition to the academic success he was achieving, Hopkins further developed an interest for photography (after being in a photography class) and did a wide array of projects stemming from aerial photo mapping and event photography such as weddings and birthday parties. For Hopkins, the latter part of his high school years finished with optimism and visions of a bright future. As Junior at Clovis High School in 1997-98, GVHS Teacher of the Year Judiah Hopkins elevated his academic success to new levels after a tough freshman and sophomore year.

After high school, Hopkins attended Fresno City College and continued to flourish academically. Hopkins had dreams of going to a larger university, but wanted to get some of his general education out of the way to set himself up to enroll in the prestigious UC system.  As part of that effort, Hopkins participated in the academic competition Destination Imagination - a competition that focuses on STEAM (science, technology, engineering, arts, and math.) For his efforts, Hopkins and his teammates were crowned National Champions of Destination Imagination during his freshman year at Fresno City College for their project “Eggtascular” which combined engineering eggs through an obstacle course, designing set decorations for the course, and performing a dramatic skit that conveyed the process or their project.  While Fresno City College provided some good memories for Hopkins, he desired to leave the Central Valley to complete his bachelor’s degree and did so by enrolling at the University of California, San Diego where he was a physics major. However, Hopkins would eventually change his major because of his instructors. Early on in his collegiate journey at UC San Diego, Hopkins had a bad physics instructor that made him question and dislike his major. At the same time, he had a math professor named Gail Machado that taught with passion and excitement causing him to switch majors and think about teaching as a future occupation. “Professor Machado has been a major influence on my life,” graciously states Hopkins, “I wouldn’t be where I am today without her guidance and passion for math.” As a freshman at Fresno City College, GVHS Teacher of the Year Judiah Hopkins was part of the National Champion Destination Imagination team.

After graduating from UC San Diego, Hopkins spent seven years working as a project manager that oversaw estimations for a construction company - a job that forced him to work behind a desk. Unsatisfied with his career choice, Hopkins reflected on the direction of his life and remembered the influence of Professor Machado at UC San Diego and decided that he would give teaching a chance. After student teaching at Clovis West High School, Hopkins was hired as a math teacher at Golden Valley High School for the 2011-2012 school year and has called our school home ever since. In his time as a Bulldog, Hopkins has taught a wide array of courses including: Algebra 10-12, CAHSEE Math (doesn’t exist anymore), Foundations Math, Pre Calculus, Math Analysis, Physics, and two Project Lead the Way courses - Engineering Development & Design and Computer Integrated Manufacturing. Additionally, Hopkins coached Mock Trial, led the GVHS charter of Honor’s Society, and was the adviser for the French Club at one time. In recent years, and with the explosion of popularity surrounding eSports, Hopkins became the first eSports coach at Golden Valley High School as he is navigating students through League of Legends. “Becoming a teacher was the best career choice I have made,” humbly states Hopkins, “I like connecting with people and working with students so that they can be successful.” What elevates Hopkins as an outstanding teacher is the time he provides his students long after the bell rings at the end of the day. One can find Hopkins daily providing tutoring to ALL GVHS students in both math and science. Hopkins also works with students that have medical issues by providing them with home instruction while they heal and get better. Hopkins even gives up some of his Saturday mornings to drive a van full of GVHS Science and Medicine Club students to a destination so that they can further grow and develop their interest in the medical field. Even in distance learning, Hopkins frequently meets with students long after his required time and even takes to providing tutoring via Zoom on Saturdays so that students are successful and have additional opportunities to make up any missing assignments. Simply put, Mr. Hopkins  cares about students. “Mr. Hopkins is one of those teachers that embodies #BulldogSTRONG,” proudly states Principal Paul Helman, “He is always there for his students- providing support at all times of the day.  Mr. Hopkins even provides extra support on Saturdays for students not able to make tutoring sessions during the week.” For his deep commitment to the success of ALL students at Golden Valley High School, Judiah Hopkins is #BulldogSTRONG and our Teacher of the Year.

Hands on, engaging, fun, and sometimes messy activities are part of the fabric of GVHS Teacher of the Year Judiah Hopkin's classroom as evident in his water pressurized rockets.

What #BulldogSTRONG Means to Mr. Hopkins: "#BulldogSTRONG as a teacher means to have fun while also learning. In my class, I try to foster an environment rooted in a hands on approach infused with practical knowledge. In the Project Lead the Way program, students show tremendous GROWTH in the four years they are at GVHS and it’s nice to see how the courses culminate together when they are seniors. ”

What Students and the Principal Think of Mr. Hopkins:

"Mr. Hopkins has been my teacher since freshman year and has always been one to offer help, advice, and sometimes a needed reality check. This year has been difficult for students and teachers alike, yet Mr. Hopkins has been sincere about his regrets for this school year and genuine in his efforts to make it worthwhile. He has placed an emphasis on a student’s right to creative liberty and the importance of exploring the world around you that is admirable. Personally, I’ll remember him as someone whose classroom caused me to ask myself whether I like the world as I see it, whether I like how I am being taught, and if maybe I feel everyone could do better.  Congratulations on being awarded Teacher of the Year, Mr. Hopkins.” Samantha Dalay Aguilar Morales, Senior Student, Golden Valley High School

“Mr. Hopkins is an exemplary model for someone who meets and exceeds all the characteristics of being #BulldogSTRONG. Mr. Hopkins does everything in his power to make sure his students have all the necessary tools to succeed in and out of the classroom. He is always willing to sacrifice his own time during the week and on Saturdays to help students succeed in the classroom. Despite having to learn through distance learning, Mr. Hopkins tries his best to make the class interesting and always greets his students, asking them how they are doing. I am very lucky to have him as my teacher for both engineering and physics as I have learned a lot from him and he has motivated me to pursue a career in engineering.” Natalie Bueno, Senior Student, Golden Valley High School

"Mr. Hopkins is #BulldogSTRONG because of the SERVICE he shows to his beloved students. Hopkins has always put in a great amount of effort to help all of his students in their work, even work from other subjects that he was knowledgeable in such as Math. I met Hopkins the summer before freshman year when he taught my Algebra 1 class; he did a great job teaching and helped us whenever we needed it. Mr. Hopkins is very nice and even 3D printed one of my projects for me using his own personal printer from a project he assigned us this year.”  Alejandro Espinoza, Junior Student, Golden Valley High School

“Mr. Hopkins is an amazing teacher and person to all his students. He is an excellent example of what it means to be #BulldogSTRONG on a daily basis. Anytime my friends and I needed help with homework, Mr. Hopkins was in SERVICE for us. His classroom was always open for anyone after school, and through distance learning, he is always available to help. While Mr. Hopkins shows PRIDE of what it means to be #BulldogSTRONG, he continues to show GROWTH by putting in countless hours outside of school to give students opportunities to succeed. ” Nathan Bernal, Junior Student, Golden Valley High School

“Mr. Hopkins is an amazing teacher who always puts his students first. In both of the years I have been in his class I have seen that he will go out of his way to help students no matter the subject. In one case, Mr. Hopkins helped a student who could not attend school by visiting his house everyday to teach him. Other than his involvement in education, Mr. Hopkins is also very involved in other school activities such as clubs like the gaming club. Overall, Mr. Hopkins has a great personality and positive attitude both online and in school.” Abhinoor Hehar, Junior Student, Golden Valley High School

“When I think about someone who puts in a lot of dedication and hard work into something, it has to be Mr. Hopkins. Mr. Hopkins is one of the many versatile teachers at Golden Valley. He's not only a teacher but a caring and compassionate adult to many students. He cares about the well-being of not just his students in his class, but to every single student that attends Golden Valley. He makes sure that they feel welcomed and strives to make his classes fun to the best of his ability. I'm glad that I was given the opportunity to be his student. He is a great example of being #BulldogSTRONG.” Simranjeet Kaur, Junior Student, Golden Valley High School

“Mr. Hopkins is one of those teachers that embodies #BulldogSTRONG.  He teaches four different preparations providing a high level of relevant instruction for each of his classes.  He is always there for his students- providing support at all times of the day.  Mr. Hopkins even provides extra support on Saturdays for students not able to make tutoring sessions during the week.  He coaches the eSports teams and coordinates Project Lead the Way.  Mr. Hopkins is #BulldogSTRONG in everything he does!” Paul Helman, Principal, Golden Valley High School