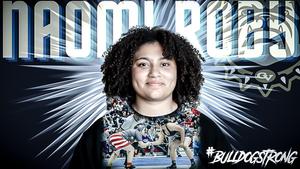 For the tremendous GROWTH she has shown in just one year on the mat, in the PRIDE she has been in belonging to the GVHS Girls Wrestling program, and in her SERVICE to the needy, Naomi Roby is #BulldogSTRONG. Plans After High School: Naomi’s plans right now are to get a scholarship to a college or university. She doesn’t have a particular university in mind yet in which she wants to attend, but she wants to enroll in a university with a prestigious engineering program.

What Makes Naomi #BulldogSTRONG: When Sophomore Naomi Roby came to the campus of Golden Valley High School as a freshman in 2019, she was uncertain of where she would specifically find her niche, but knew that she would be an active participant in athletics. In the fall, she played volleyball and gained confidence as an athlete as she quickly became a leader and one of the best players on the court. However, little did Naomi know that it wouldn’t be volleyball in which she would shine, but it would be a sport in which she was completely unfamiliar with - wrestling. “At first, I was pretty hesitant about wrestling and I really didn't know much about it,” humbly admits Naomi, “After thinking it through I figured it would be nice to try something a bit different as well as get out of my comfort zone.” For Naomi, the decision to wrestle ended up becoming a wise choice as she took to working hard, listening to her coaches, and striving to become the very best that she could be - all characteristics that catapulted her to one of the top talents at the 189 pound weight division. For her efforts in her just first year wrestling, Naomi learned a spot on the Varsity roster and had a respectable 22-11 record, league championship honors, and accomplished top finishes in some of the most prestigious girls wrestling tournaments in the state of California: Rebel Showcase (1st) Queen of the Valley (1st)  South Yosemite League (1st) Coyote Classic (2nd) Santa Maria Invitational (2nd) California Girls Invitational (3rd) Montclair Lady  Cavalier (3rd). In the Kern High Network South Yosemite Conference tournament in which wrestlers compete the illusive guitar, Naomi wrestled her way all the way to the finals to lose in a thriller. However, that short term defeat further motivated Naomi to finish her season strong as she finished in 3rd place in the CIF Central Section Southeast Area and 5th in the CIF Central Section Master’s, just falling short of qualifying for the state tournament. Her accomplishments along with her 22-11 record catapulted her to BVarsity All Area 2nd Team Honors. “I like that this sport has made me mentally, emotionally, and physically stronger,” passionately states Naomi, “It makes me proud to be in GV’s girls wrestling program, and knowing that I’m in one of the top programs in the state pushes me to do my best so we can be the best.”

GVHS's Naomi Roby emerged as one of the premiere wrestlers in the CIF Central Section in the 189 pound division as a freshman last year.

In addition to the success she has accomplished on the mat, Naomi has found much academic success as she has earned over a 3.8 GPA while being enrolled in College Prep classes and in Golden Valley’s rigorous Project Lead the Way Program which prepares students for careers in engineering. Naomi also possesses a benevolent side that strives to SERVE the needs of others in her community. One community service project that she participated in was a simple neighborhood outreach through her church Valley Bible Fellowship and the chief purpose was to demonstrate a caring and friendly heart to those in need in the area surrounding her church. The other community service project that she has participated in has been Operation Christmas Child through Daybreak Baptist Church and it consisted of packing shoeboxes with self care necessities and toys for boys and girls overseas. For the tremendous GROWTH she has shown in just one year on the mat, in the PRIDE she has been in belonging to the GVHS Girls Wrestling program, and in her SERVICE to the needy, Naomi Roby is #BulldogSTRONG.

Whether on the wrestling mat against an opponent or in the community serving those in need, Naomi Roby is the epitome of care, friendship, and kindness to others.

What #BulldogSTRONG Means to Naomi: "What #BulldogSTONG means to me is to make an effort, be coachable by listening to staff and coaches, and to be a respectful citizen not only at Golden Valley but also within my community. ”

What Teachers and Staff Think of Naomi:

"Naomi was a wonderful and surprising addition to our team last year. From day one, she has shown hard work in all aspects of being a student-athlete. Through her dedication, she has climbed through the growing field of girl’s wrestling to become a serious contender for some State and National hardware.” Juan Gamino, Head Wrestling Coach Girls Wrestling, Golden Valley High School

“Naomi is one of the best Geometry students in her period. She consistently finishes her work, and her tests, and has one of the highest grades in the class so far each quarter of this year. She has also been willing to help my student teacher out with showing her video and participating which shows her selflessness. Naomi is definitely #BulldogSTRONG!” David Gago, Mathematics Teacher, Golden Valley High School

"When I think of Naomi I think of the word ‘determination.’ Naomi is a bright and hard working student. Through the difficulties of distance learning she strives to submit excellent work and does what it takes to be a successful student. Naomi stays #BulldogSTRONG and is a joy to have in class."  Melissa Waldrop, English Teacher, Golden Valley High School

“Noami is a bright student that has always tried her best to engage in classroom discussions and has no problem interacting in class.  At times,  when her classmates need that extra push, Noami is there to help them out. She is a dedicated student and athlete.  Her perseverance is well noticed.  Very proud of you Naomi!” Eva Perez, Spanish Teacher, Golden Valley High School

“I coached Naomi in volleyball her freshman year and she was one of our team leaders and top players. Naomi would spend every lunch period in the gym working on her serve and volleyball skills instead of eating lunch with her friends; she also had straight A's. She is truly one of our top female student athletes and will definitely be a force on and off the court in the future! She was simply a joy to coach!” Bill Richardson, PE Department Chair and Freshman Volleyball Coach, Golden Valley High School