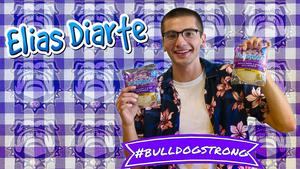 For his love of the Smuckers Uncrustable peanut butter and jelly sandwiches served in our cafeteria and for taking PRIDE in being a Bulldog in his own, unique way, Elias Diarte is #BulldogSTRONG.

Plans After High School: Elias plans to enlist in the United States Navy for at least a six year term as a military linguist. After he serves, Elias hopes to major in nursing and become the coolest nurse around.

What Makes Elias #BulldogSTRONG: One of the behavior expectations of being #BulldogSTRONG through GROWTH, PRIDE, and SERVICE that often gets overlooked is the expectation to have PRIDE on campus by being a Bulldog. Since the inception of the #BulldogSTRONG Student Spotlight in 2018, GVHS students have demonstrated their version of being a Bulldog through their participation in athletics, clubs, student leadership, academic competitions, visual and performing arts, choir, band, and a myriad of other entities on campus. For Senior and perpetual optimist Elias Diarte, his version of being a Bulldog is found in the ordinary albeit memorable moments on the campus of Golden Valley High School. For example, Elias has genuinely cherished the interactions he has had with his fellow classmates and his teachers on a daily basis while taking to eating his favorite dish from the cafeteria - the Smuckers’ Uncrustable peanut butter and jelly sandwiches. “I myself find I like Golden Valley for the people and also the peanut butter and jelly sandwiches,” states Elias, “They're (sandwiches) really good, and the people are really cool.” Additionally, Elias’s version of being a Bulldog can be found in some of his more clumsy moments around campus of which include the following: tripping over some wires connected to a teachers’ speakers, slipping on the way to class just to land in a puddle, slipping in the restroom, and falling over in his chair the middle of class. While some high school students might find embarrassment in such situations, Elias chooses to find the humorous and lighter side of each situation. “There's nothing else to do but relax and enjoy yourself. When one is relaxed, one is calm, and ready to socialize and learn and laugh and smile,” humbly states Elias, “I regard relaxation as essential, and I suggest that all students allow themselves the pleasure of relaxation.”

Perpetually optimistic, relaxed, and one who genuinely enjoys learning, GVHS Senior Elias Diarte takes PRIDE in being a Bulldog in his own, unique way.

However, for Elias, his version of being a Bulldog isn’t merely limited to Uncrustables, the occasional fall, and complete relaxation. For Elias, being a Bulldog also includes maintaining an open mind coupled with a thirst for knowledge. Academically, Elias has accumulated 4.162 GPA which places among the top 10 students for the Class of 2021 and is the top male as far as GPA is concerned. Elias genuinely enjoys the process of accumulating new knowledge, whether it is reading, writing, solving equations, or just learning, it is all pleasure for him. Elias’s favorite hobby is practicing his language skills by speaking Spanish everyday outside of school as he spends more time on that than anything else; he takes pride in being able to order food by himself, without help, in a restaurant wherein Spanish is only spoken. “I think it's just that I tend to find a way to enjoy whatever it is I'm doing, and in that way my ‘work’ becomes a personal pleasure.” Elias plans to utilize his language skills after high school by becoming a linguist in the US Navy and eventually becoming a nurse to help others. In sum, Elias is grateful for the staff and people at GVHS that paved the way for him to succeed and that have accepted his version of being a Bulldog. “Every single one of my teachers has been influential, whether that be directly or indirectly,” graciously comments Elias, “I've liked all my classes to a ridiculous extent at times.” For his love of the Smuckers Uncrustable peanut butter and jelly sandwiches served in our cafeteria and for taking PRIDE in being a Bulldog in his own, unique way, Elias Diarte is #BulldogSTRONG.

What #BulldogSTRONG Means to Elias: "To me, BulldogSTRONG means to be the best that one can be. That takes into account attitude, work ethic, effort, having respect, all that jazz. If one makes furniture, to be BulldogSTRONG is to make the best furniture that you possibly can, with all the integrity and effort you can muster.”

What Teachers and Staff Think of Elias:

"Elias is one of the most unique people I have ever met. His interests are wide-ranging, his thirst for knowledge is unquenchable, and his depth of understanding is remarkable.  But most admirable is the humility he displays when he openly admits that he doesn't know everything. But that doesn't keep him from trying.” Terri Richmond, Social Studies Department Chair and WASC Coordinator, Golden Valley High School

“Elias is an outstanding example of #BulldogSTRONG character.  His participation in the Forestry program the fall of 2019 allowed him to demonstrate growth as he learned more about forestry skills and the importance trees have in our community.  He demonstrated pride when he participated in this program and was able to showcase this learning in a presentation format at the end of the weekend.  Additionally, I believe that Elias will demonstrate service with his newfound knowledge and can be a lifelong advocate protecting our forests and keeping them healthy by sharing what he learned with the community.” Jennifer Yamauchi, Science Department Head and Assistant Dean of Students, Golden Valley High School

"I have had the pleasure of getting to know Elias this school year, which could have been a challenge due to virtual learning. However it was not with Elias. He showed up ready to learn every day where he actively participated in class, including using his camera. On most days he was my only student I got to see, and this was so refreshing. He is an inquisitive student who has a thirst for knowledge. He always is looking to see how he can improve, and he gives 100% on all work, no matter how big or small. Beyond his dedication to his academics, Elias is a gregarious young man who works to engage with every student, often getting laughs. He is uniquely himself, which shows his confidence and self-assurance. He has been a wonderful student to teach this year, and I hope (know) he will have a flourishing future in the Navy."  Madison Bealessio, English Teacher and Yearbook Advisor, Golden Valley High School

“Elias is an awesome young man! Elias is driven to do well in everything and learn as much as he can, especially other languages. I know that Elias will be very successful in the medical field due to his great personality and being humble.  I admire his dedication to serve our country and I know he will make a great addition to the US Navy. I very much enjoy having him in my class! ” George San Miguel, Science Teacher, Golden Valley High School

“I cannot say enough about Elías. He is one of the best language learners I have ever taught. He is fully committed to learning Spanish and shows it every single day. Elías is also invariably polite and friendly. He is a joy to work with and a valuable member of our learning community.“ Gabriel Flores, AP Spanish Teacher, Golden Valley High School

“I met Elias at the beginning of this year, and in this short time and strange situation I have learned how determined, inquisitive, and fun he is. In distance learning, I could always count on him to have his camera on during class and to laugh at my jokes. In person, Elias always shows up ready to have a great day and he helps to put those in our small class in a good mood. Elias also always has great questions and shows a true enthusiasm for learning. He told me at the beginning of the year that he had no intention of taking the AP Gov test, but rather he wanted a challenge and to learn more about the topic. As much as I want students to take the test, I appreciate that sentiment and that he wants to challenge himself. He will do great things in the future and I am honored to have been able to be his teacher this year.” Trisha Brown, Social Studies Teacher, Mock Trial Coach, and Head Swim Coach, Golden Valley High School

“Elias was in my freshman GATE English class and quickly established himself as a #BulldogSTRONG student. He was funny, kind, and worked well with others. In academic discussions, Elias expressed ideas that motivated his classmates to dig deeper into a text and move beyond a surface understanding. His academic work ethic, collaborative nature, and willingness to help everyone succeed are what make Elias #BulldogSTRONG.” Jamie Contois, English Teacher and ELD Teacher, Golden Valley High School