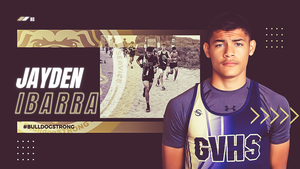 For his humble, intense, and passionate  commitment to the Golden Valley High School Cross Country program and in his ability to overcome obstacles, Jayden Ibarra is #BulldogSTRONG.

Plans After High School: Jayden plans on attending Bakersfield College and then transferring to a four year university to study computer programming.

What Makes Jayden #BulldogSTRONG: One of the key behavior expectations at Golden Valley High School, as outlined in the GVHS behavior matrix #BulldogSTRONG...The Map to Success, is that students exhibit GROWTH in the community by overcoming obstacles. For GVHS Senior Jayden Ibarra, the ability to overcome obstacles has been vital to his success as a runner on the cross country team. All his life it seems that Jayden has always been running - whether it be in cross country, soccer, or in track and field. Throughout his years as a student in the Greenfield Union School District, Jayden was an active participant on the track and field team (because there is no cross country at the elementary and middle school level) as he ran long distances at both Kendrick Elementary School and Ollivier Middle School. When he came to GVHS, he joined cross country so that he could improve his times in track and field, but quickly grew a passion for this new sport. “Cross country has really helped me grow as a person,” acknowledges Jayden, “It's a great sport, it really gets your mind off things if you have problems and stress, it's a great way to relax and think.” Jayden has seen his fair share of success in his races - whether on the beaten paths of cross county or on the track in the spring for track and field events. For an average two mile race, Jayden clocks in at around 11 minutes and as a personal best in a 5,000 meter race (cross county) he ran 18 minutes and 8 seconds. As a result of his quiet, intense commitment to the GVHS cross country program, Jayden earned the honor of being selected as a team captain alongside his teammates Cesar Palomares and Raul Sahagun. Known for his gloves and long sleeves, Senior Jayden Ibarra competes with a quiet intensity every time that he races.

Despite all of his accomplishments that he has achieved as runner and the medals he has earned at numerous races, one race will forever stand out to him, not because of the success attained, but because of failure. In a race at McFarland High School, Jayden was running at a fast pace and because of the tempo, he found himself in first place for a majority of the time. However, with just a few turns remaining from the finish line, Jayden pivoted in the wrong direction by taking a wrong turn and as a result of this slip up, he lost the lead and finished in 7th place. “I remind myself often about that race often,” humbly states Jayden, “I remind myself so that it won’t ever happen again.” Perhaps his ability to overcome adversity stems from the positive influence and encouragement of GVHS Cross County Head Coach, Manuel Sanchez. “Coach Sanchez has been the most influential staff member at GVHS towards me,” graciously indicates Jayden, “When I am down or have no motivation to continue running or practice, he's the one to tell me to pick up my head and keep going. He also reminds me how far I have come so I won't give up when I am at the end of a race.” For his humble, intense, and passionate  commitment to the Golden Valley High School Cross Country program and in his ability to overcome obstacles, Jayden Ibarra is #BulldogSTRONG. Jayden Ibarra digs in at the Morro Bay Invitational last weekend and his effort earned him the honor of being selected for the #BulldogSTRONG Student Spotlight.

What #BulldogSTRONG Means to Jayden: "For me, #BulldogSTRONG is respecting one another, not judging how one looks, how one speaks, or how they are in general.”

What Teachers and Staff Think of Jayden:

“I have known Jayden for over three years, and during this time, I have witnessed his hard work and growth to become one of the top runners in our league. Jayden demonstrates pride and does an excellent job of representing GVHS at every race. His goal is always to finish in first place; he personifies the quote from the great Ricky ‘Bobby, If You Ain't First, You're Last!’” Manuel Sanchez, Head Cross Country Coach and Librarian, Golden Valley High School

“Jayden is such an awesome young man. He puts in the work every day to get better on the course and in the classroom. Along with being one of our top runners, he is also a big contributor to our Division 1 soccer team. Jayden is one of our top student athletes to watch this year and we expect big things from him.” Robert Haskell, Athletic Director, Golden Valley High School

“Jayden has a remarkable ability to encourage his teammates to run faster and farther, and he has a spectacular work ethic at practice. Jayden is the embodiment of what it means to be #BulldogSTRONG.” Rebecca Bledsoe - Santaella, English Teacher and Cross Country Coach, Golden Valley High School

"When I first met Jayden during summer school, I thought he was there to get an 'easy grade' like everyone else. However, once we began working on lab experiments, I saw Jayden step up his game. He was punctual, ready for his labs, and he was at the top of the class. At the end of summer school, his titrations were even better than mine!” Justin Thornton, Chemistry and IPS Teacher, Golden Valley High School

“Here are a few sors I can say about Jayden Ibarra. He is a humble and dedicated student athlete. I had the opportunity to coach him for two years as a soccer player. He definitely represents what it means to be #BulldogSTRONG .” Jose Solarzano, Equipment Manager, Golden Valley High School