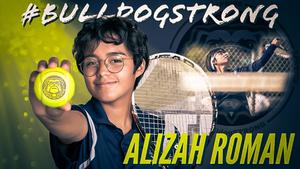 For the tremendous GROWTH she has displayed on the tennis courts for the Lady Bulldogs and in the SERVICE she demonstrates in her efforts to improve the mindsets of her teammates, Alizah Roman is #BulldogSTRONG. Plans After High School: Alizah plans to go to a cosmetology school to pursue a career of being a hairstylist. Alizah loves doing hair and cutting it and feels very passionate about making it a job she loves to do every day.

What Makes Alizah #BulldogSTRONG: One of the major behavior expectations for students at Golden Valley High School on their path to being #BulldogSTRONG is developing into a lifelong learner. Essentially, the idea is that students continually demonstrate GROWTH on their path towards success, learning new skills and knowledge as they traverse their years as a Bulldog. For GVHS Senior Alizah Roman, she has exemplified what it means to be a lifelong learner by her exceptional play and athleticism on the tennis court. Alizah first took to tennis in March of 2021 and beyond a brief stint in JV Softball, she never really participated in athletics at GVHS. Despite her late start, Alizah fell in love with the sport and committed her time to sharpening her skills. This past summer took lessons at Stockdale Country Club where she enjoyed the process of learning how to become a better tennis player. Alizah watched YouTube videos of Australian tennis pro Nick Krygios because of his passion and ability to hit the ball at odd angles. She also watched videos of legend Rafael Nadal because like Nadal, Alizah is a lefty.   As a result of the hard work that she put into off season training, Alizah solidified the number 2 position for the Lady Bulldogs in singles and with GVHS Senior Alexandra “Alex” Nunez, she is on the number 1 singles team. Not only did her hard work land her a prominent position on the team, but it also contributed to much success on the courts. This season Alizah has accumulated an overall record of 17-6 in singles play and a record of 11-3 in doubles play. Additionally, Alizah helped lead the Lady Bulldogs to a 1st Place finish at the Arvin Tennis Tournament and an impressive 5-4 victory over SYL rival Ridgeview High School who is a perpetual favorite to win the league championship every year. Alizah "Lefty" Roman just started playing tennis in March of 2021 and has already become a force for the Lady Bulldogs as #2 Singles and #1 Doubles.

Beyond the winning and the accomplishments that Alizah has seen on the tennis court, it is the friendships and supportive environment of the Lady Bulldogs Tennis program that she finds most appealing. “The most rewarding aspect of playing tennis at Golden Valley is definitely my teammates and the people I have met playing tennis,” humbly states Alizah, “I have made such tight bonds and friendships playing a sport I really enjoy.” Alizah always strives to make sure that her teammates are supported and encouraged and does so with a positive and optimistic attitude. Before games, Alizah could be seen smiling and making jokes with her teammates in a way that builds comradery amongst the Lady Bulldogs. “I feel that my role on the team is support,” explains Alizah,  “I try my best to not let any of my teammates get down or feel bad about themselves whenever we play a game.” Alizah encourages students at GVHS to give tennis a chance because of the friendships that are forged. “If anyone has any hesitations on doing a sport, I definitely recommend tennis,” comments Alizah, “It is so much fun and the friendships you make while playing make your season that much better.” For the tremendous GROWTH she has displayed on the tennis courts for the Lady Bulldogs and in the SERVICE she demonstrates in her efforts to improve the mindsets of her teammates, Alizah Roman is #BulldogSTRONG.

Led by Head Coach Ed Crosby, the Lady Bulldogs Tennis program is rooted in teamwork and support which is why Alizah Roman loves being part of it.

What #BulldogSTRONG Means to Alizah: "#BulldogSTRONG means everything to me. It means what I need to learn and use every single day moving forward. Whether it be in a classroom or at my place of work. Growth, Pride, and Service are things everyone should know before leaving Golden Valley High School.”

What Teachers and Staff Think of Alizah:

“Alizah was first introduced to tennis in the early Spring of 2021.  A softball player recommended that she try out for tennis and after only a few weeks of practice it became evident that Elizah had a natural athletic ability that would transfer to the tennis courts.   Through her hard work and dedication, Alizah has risen to #2 Singles, as well as partnering with Alex Nunez in #1 Doubles.  Alizah demonstrates both PRIDE and SERVICE in her interactions with both teammates and opponents alike.  Affectionately referred to as ‘Lefty’, Alizah is #BulldogSTRONG!” Ed Crosby, World History Teacher and Varsity Girls Tennis Coach, Golden Valley High School

"Alizah is such a great student athlete. She works hard everyday to improve on and off the court. It has been fun this year to go watch her matches. Before she takes the court she is smiling and joking with her fellow tennis players. Then she takes the court and she is all business. I expect big things from Alizah for the rest of the season and into the playoffs.” Robert Haskell, Athletic Director, Golden Valley High School

“Alizah is an Amazing student who actually flourished in my virtual classroom last year. She was totally involved in the chat and class participation and was one of the real super stars of distance learning. Having her in the actual classroom this year has been a blessing, no doubt.” Aaron Wright, US History and Government Teacher, Golden Valley High School

“Alizah is the definition of #BulldogSTRONG. She is the sweetest student, is committed to her studies and always puts in a little extra into her work. She is an excellent contribution in the classroom, as well as on the girl's tennis team. I have no doubt in my mind that Alizah will be an amazing human being as she continues on in life and will continue to show growth, pride and service wherever life takes her!” Mikaela Gonzalez, Health Teacher, Golden Valley High School

“Alizah is such a wonderful student. Alizah is so kind and caring towards others, and is always one of the first few people to answer questions in class. I’m so thankful that Alizah is my student. Way to be #BulldogSTRONG!” Nadia Wehbe, English Teacher and SAGA Club Adviser, GVHS

“Alizah is a model student-athlete; she is a fierce competitor on the tennis courts and does an admirable job managing her time between practice and classwork to maintain a high GPA. She demonstrates pride by helping organize the library and provides valuable service when assisting students in locating library resources. Alizah has proven to be an excellent addition to the library family.” Manuel Sanchez, Teacher Librarian and Head Cross Country Coach, Golden Valley High School