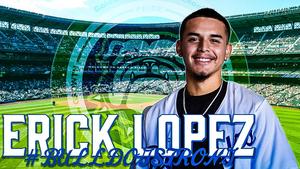 For the tremendous academic GROWTH he has shown at GVHS, in the PRIDE he has in being a Bulldog, and in the SERVICE he displays by treating others with exceptional kindness, Erick Lopez is #BulldogSTRONG.

Plans After High School: Eric’s plan after high school is to attend a four year college and or university. He wants to one day become a teacher and plans on returning back to GVHS to teach the next generation of Bulldogs.

What Makes Erick #BulldogSTRONG: Many of the #BulldogSTRONG Student Spotlights recognize students for their achievements and accomplishments on the field or court of play, for their talents in visual and performing arts, or for the impact that they have left on their community. However, sometimes students can be recognized for being an exceptionally kind and hard working human being and such is the case for Golden Valley High School Senior Erick Lopez. For the first two years of high school and while attending Mira Monte High School, Erick spent time figuring out what type of student he wanted to become as well as the direction of his life. When his junior year started, Erick was faced with the difficulties of distance learning as well as the transition to a new school as he transferred to GVHS. It took a while to adjust the norms and changes of a new school, but Erick quickly learned that were staff and students that were there for him on his way to being #BulldogSTRONG. By surrounding himself with positive influences, Erick became an extraordinary student that was motivated to help others and pay back the support that was given to him. “Golden Valley will always be with me forever and I hope to return one day as a teacher,” comments Erick, “I have enjoyed the hospitality and care that the staff on campus has provided me.” Erick is quick to provide gratitude to two of his teachers, Lori Ambrose and John Hansen, for providing extra time and support to encourage him to accomplish greatness in his life. As a result of his efforts this year, Erick is on track to get straight A’s for his Senior year and in his job at Walmart, he has seen his fair share of promotions and raises along the way as he was recently elevated to be a Grocery Team Captain because of that positivity and hard work. Erick Lopez works hard in the classroom and at Walmart where he has received promotions and respect amongst his coworkers.

Beyond the GROWTH he has demonstrated in the classroom and in the gratitude he has for the support he has received, Erick has established himself as a Bulldog that treats everyone that he meets with the utmost respect and kindness. Teachers, students, and staff members alike comment on the positive energy that Erick brings to the classroom daily that is equipped with good manners, dignity, and value for the person that he is interacting with. “A positive attitude is key to life,” humbly indicates Erick, “I choose to stay positive because now matter how hard times may be or how stressed out you are, things will always get better as long as you put 110% effort into making it better.” For Erick, some of his positive energy stems from his experiences at GVHS. Erick appreciates being a Bulldog because of the social interactions between people of different races, preferences, and lifestyles - for him, the students at GVHS put aside their differences and see each other as human beings. Additionally, Erick desires to do his part to spread positivity and kindness, wanting to be known as a student that helped out his classmates, representing the Bulldogs and campus the right way. “Golden Valley is a special place to me for one reason,” graciously states Erick, “This school has shaped me into the person I am going to be for the rest of my life and I am proud to say that I am and will always be a Bulldog.” For the tremendous academic GROWTH he has shown at GVHS, in the PRIDE he has in being a Bulldog, and in the SERVICE he displays by treating others with exceptional kindness, Erick Lopez is #BulldogSTRONG. Erick Lopez (back row middle left) has demonstrated personal GROWTH at GVHS and has fostered many positive relationships along the way.

What #BulldogSTRONG Means to Erick: "#BulldogSTRONG has different meanings to me. Stay motivated, be positive, and work hard. But the one meaning that stands out most to me is to be awesome at everything you do in life, inside and outside of school.”

What Teachers and Staff Think of Erick:

"I admire this student immensely.  Not only did he overcome last year and the struggles that he faced, but he continually strives to be better each and every day. He went from not being A-G to changing his career path to an A-G college bound future teacher and/or firefighter. As a student of mine last year and in summer school, to my first period TA, Eric talks with students, asks about the teaching profession, wants to know how we deal with different learning types, special ed, etc. He honestly researches his ideas and sets goals. When he's not at school,  he is working full time. He has excelled in his job receiving multiple raises and promotions in a very short time.  I cannot wait to see what Eric does in his life. Whatever it is, he will be a huge success. I have truly been blessed to have been his teacher.” Lori Ambrose, English Teacher, Golden Valley High School

“Erick Lopez is an outstanding young man and the epitome of being #BulldogSTRONG as a student. In the classroom Erick gives his absolute best effort every day in class and his coursework shows sincere thoughtfulness as well. Additionally, Erick is a thoughtful young man who engages in meaningful conversations and he is an inquisitive learner who truly wants to do his best and wants to grow as he moves through life. From conversations with Erick he admits distance learning was rough on him and when he returned to campus in the Spring he found his motivation and was able to successfully change his grades and transition himself to be a dedicated learner. Since then he is excelling academically and he is interested in pursuing a career as a teacher so he can be a positive part of the lives of future students. Without a doubt he is the kind of young man who epitomizes being #BulldogSTRONG and who will be a contributor to our community as he moves forward in life.” John Hansen, Government/Economics Teacher and We The People Coach, Golden Valley High School

"I have Erick in my Strongbody class and he always has a positive attitude and is one of my hardest workers; he has great potential and I enjoy having him in class."  Bill Richardson, PE Teacher and Volleyball Coach, Golden Valley High School

“Erick is one of those students that teachers enjoy having in their classes. From the first day he has been very respectful and follows the safety rules. He is always ready to work and did a great job on his first project. I look forward to him doing some nice work in the shop this year. ” John Haskell, Woodshop Teacher, Golden Valley High School

“From the moment I first met Erick Lopez, I knew that he was an incredibly kind human being equipped with dignified manners far beyond his years. As I learned more about his journey through high school, I have become more inspired to act like Erick and treat others the way that Erick treats others. His focus, hard work, and dedication to being a better person daily exemplifies what we hope all students will become at Golden Valley High School.” Kyle Wylie, Assistant Principal of Administration, Golden Valley High School