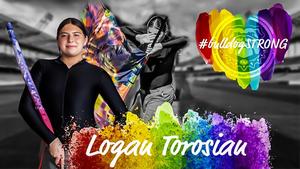 For the tremendous GROWTH he has shown rising from team manager to an elite performer on the Color Guard Team as well as in the personal and academic GROWTH he has displayed, Logan Torosian is #BulldogSTRONG. What Makes Logan #BulldogSTRONG: For Senior Logan Torosian, it has been a quote from the famous poet, memoirist, and Civil Right Activist Maya Angelou that has provided him with strength, courage, and guidance as he has navigated four years as a Bulldog at Golden Valley High School. In a powerful sentiment, Angelou once commented, “If you’re always trying to be normal you will never know how amazing you can be.” As Logan began high school, he simply wanted to find normalcy as navigated from one period to the next, but soon he found himself drawn to Golden Valley’s premiere Color Guard squad and over the past few years, he has grown into one of the leaders on this prestigious team. A little shy, hesitant, and uncertain of his ability to perform at an elite level, Logan took to being the team manager when he first joined, but was treated like any member of the team. “The color guard team at Golden Valley is something extremely special to me,” Logan graciously states, “Not only are we one of the best in Kern County, but we take PRIDE in making our team a safe and open space for all.” As Logan matured and advanced in his years at GVHS, so did his confidence, skill, and ability to perform at an elite level for the color guard team - moving from normal to exceptional. Logan has been part of some memorable Golden Valley Color Guard teams that won sweepstakes at all their field season competitions (2019) and participated in the elite Music In Competition that is held annually at Centennial High School. However, it was at P.P.A.A.C.C. competition that took place in 2020 at Golden Valley High School in which Logan took the next step as a color guard performer. “Being at that competition was so much fun interacting with other teams and bonding with my own team,” comments Logan, “The competition provided me with the necessary steps to truly get out of my comfort zone.” This year as a Senior, Logan has taken his newly found confidence and has helped lead the GVHS Color Guard team to early season sweepstakes victories at Bakersfield High School and Frontier High School respectively. From Team Manager to Captain of the GVHS Color Guard Team, Logan Torosian has demonstrated tremendous GROWTH as a Bulldog.

Beyond his commitment to color guard, Logan has also stepped out of his comfort zone in other areas on campus, displaying more personal GROWTH. Logan has served as Drama Club Treasurer, Class of 2022 Vice President from 2018-2020, Criminology Club Treasurer, and is also part of the Interact Club  which takes part in community service based projects. Academically, Logan has also seen his fair share of GROWTH as well. Like many students across campus and in Kern County, Logan had some difficulties and struggles with distance learning, but since coming back to campus for in person instruction in late Spring, Summer, and through the 1st Quarter this fall, Logan has flourished with exceptional grades as he has received mostly As and currently has a 3.83 GPA. For Logan, his high school journey at Golden Valley High School can be summed up into one word - GROWTH. “When I think about my high school experience, many things come to mind. Most are good, there have been some obstacles, but overall, I think about GROWTH,” humbly comments Logan, “Golden Valley has been a place that has allowed me to express myself without judgement. I will always appreciate these moments as a Bulldog.” For the tremendous GROWTH he has shown rising from team manager to an elite performer on the Color Guard Team as well as in the personal and academic GROWTH he has displayed, Logan Torosian is #BulldogSTRONG. Logan Torosian has been a vital contributor and leader for the success of the GVHS Color Guard Team during field season this year.

What #BulldogSTRONG Means to Logan: "#BulldogSTRONG is overcoming obstacles and taking them intuitively to help your peers around you overcome those same challenges. It also means to acknowledge differences and keep a positive mindset at all times.”

What Teachers and Staff Think of Logan:

“Logan is one of the kindest souls I have ever come across. He puts so much love and excitement into everything he does. Logan has shown GROWTH each year I've known him first as taking the responsibilities of a Team Manager and now as a lead performer. His dedication to our team is inspiring. Logan is just so fun to be around and we love having him as part of our little family. He's stuck with us for life!” Nancy Cisneros, Head Color Guard Coach and English/ELD Teacher, Golden Valley High School

“Logan is a wonderful example of what being #BulldogSTRONG means. He is a fantastic leader, he always makes sure that his fellow teammates on the Colorguard team are focused and ready to go, and he helps out students whenever they need it as well. In addition to these wonderful qualities, Logan also has an amazing attitude and always helps the Colorguard stay strong and positive. I absolutely love being his Band Director and I’m excited for his future.” Kristen Torres, Band Director, Golden Valley High School

“Logan promotes equality among all his peers, and he stands up for what is right. Logan has persevered through tough times, and despite the obstacles he has gone through, he has never had a bad attitude. In addition, he promotes school spirit, and he is proud to be a student at Golden Valley. He represents #BulldogSTRONG.” Rebecca Bledsoe Santaella, English Teacher and Cross Country Coach, Golden Valley High School

“Logan is an amazing student! He is such a great addition to my classroom. He is always ready to think critically and ask thoughtful questions. I always look forward to him participating in class. He is an advocate for himself and others and is not afraid to speak out against any injustice he sees. This is well deserved!” Cameron Hertzog, Social Studies Teacher, Golden Valley High School

“Logan is pure light and joy in the classroom. He gives off the feeling that everything is going to be okay. His kindness and his friendships demonstrate what a good person really looks like. If anyone embodies GPS completely, I would say it's Logan Torosian.” David Lollar, English Teacher, Golden Valley High School

“Logan is #BulldogSTRONG because of his hard work and commitment to our award-winning Color Guard team. He demonstrates pride by keeping the library organized and providing valuable service when assisting students in locating library resources. Logan has proven to be an excellent library student.” Manuel Sanchez, Librarian and Head Cross Country Coach, Golden Valley High School