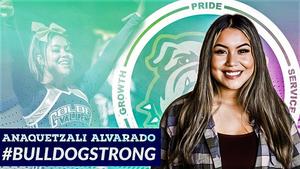 For the enthusiastic energy and infectious smile that she brings as a Bulldog Cheerleader and in the countless friendships that she has made along the way, Anaquetzali “Ana” Alvarado is #BulldogSTRONG. Plans After High School: Anaquetzali wants to attend California State University, Bakersfield and pursue a degree and career in engineering.

What Makes Anaquetzali #BulldogSTRONG: For most of her life, Golden Valley High School Senior Anaquetzali “Ana” Alvarado has been in front of large crowds, displaying her optimistic smile, and encouraging others to support the home team on to victory from her position as a cheerleader. As a youngster at Fairview Elementary School, Ana was a Falcon Cheerleader, then was a Roadrunner Cheerleader at McKee Middle School, and for the last four years has been a Bulldog Cheerleader and has loved every moment of her experiences, meeting some of her best friends along the way. “What I have liked most about cheerleading is all of the people that I have met throughout the years,” Ana graciously states, “Some of my best friends have come from cheer and for that, I am beyond grateful.” As one of the leaders in the Bulldog Cheer program, Ana has been instrumental in providing a positive environment for her teammates and encouraging others to get involved and show their school spirit. “The advice that I would give to those that are interested in cheer is to try out, even if you are a shy person,” enthusiastically exclaims Ana, “It is worth the experience of meeting new people and being a part of most of the schools’ activities.” As a Senior, Ana has enjoyed her experience as a cheerleader, creating memories along the way as she was able to cheer under the ambiance of the Friday Night lights at football games as well as being crowned as the 2021 Homecoming Queen while dressed in her cheer uniform. However, for Ana, it was her Senior Night at GVHS’s last home football game that stirred emotion in her because of the sense of finality. “My most memorable moment at Golden Valley as a cheerleader would be my Senior Night,” humbly comments Ana, “It was then when I realized how long I’ve been in cheer and how much I’ll miss it when I go to college.” Anaquetzali "Ana" Alvarado was selected as the 2021 Homecoming Queen at Golden Valley High School while in her cheer uniform.

Ana’s love of being a Bulldog Cheerleader has not only been evident at football or basketball games, but as a member of the ASB Student Leadership team where she serves in the position of Cheer Representative. The position has allowed Ana to be more involved in school functions and events as well as create activities in which all students at GVHS can participate and feel like they are valued. “My goal as a student leader at Golden Valley is to improve student participation at school activities and help make our campus a positive place and experience for everyone,” Ana passionately states. Ana has taken her leadership to position to heart as she strives to be available for her classmates, help out when there is a need at school, or simply by setting the example of what it means to be #BulldogSTRONG. Academically, Ana has earned a 3.833 GPA in her four years and for this year, she has earned a 4.33 GPA through Quarter 1 while being enrolled primarily in Advanced Placement and Honors classes. Beyond the academic success, the awards, and leadership positions that she serves in, Ana will always cherish the friendships that she has developed at GVHS more than anything else. “Golden Valley is a special place to me because it is filled with memories that I will always cherish with my forever friends.” For the enthusiastic energy and infectious smile that she brings as a Bulldog Cheerleader and in the countless friendships that she has made along the way, Anaquetzali “Ana” Alvarado is #BulldogSTRONG. Anaquetzali "Ana" Alvarado (right) was elected as Cheer Representative for ASB Student Leadership and has the goal of increasing student participation in activities at GVHS.

What #BulldogSTRONG Means to Anaquetzali: "To me #BulldogStrong means to be a good person, show respect on and off-campus, and strive for excellence.”

What Teachers and Staff Think of Anaquetzali:

"Anaquetzali has been a cheerleader for four years, and joined the Leadership program last spring. She is as smart and hard-working as she is kind. I truly mean it when I say it is a joy to be around her. She contributes to making GVHS student leadership and GVHS cheer the great programs that they are. I am only sad that she is a senior and we won’t get to have her around next year.” Valerie Black, Activities Director and Cheer Adviser, Golden Valley High School

“Ana has been on my team all four of her years at Golden Valley. She always comes into practice smiling with a "we can do this'' attitude! She's so helpful, not only can I count on her, but I know her teammates can count on her also! It was a pleasure to coach Ana and see her grow and become the leader she is today.” Brianna Waters, Instructional Assistant and Head Cheer Coach, Golden Valley High School

"I have had the privilege to work with Ana for the last two years in our engineering program.  She is one of my go to students and I am lucky enough to have her for three classes each day.  She is extremely creative and talented in her projects, bringing an artistic flair to her work.  She continues to grow in her engineering - making a variety of projects for herself utilizing the laser engraver and cnc router and helping others with their own projects.  She shows pride and service by being an amazing Cheerleader and ASB representative."  Judiah Hopkins, Project Lead the Way/Physics Teacher and eSports Coach, Golden Valley High School

“One thing that’s fun about being an educator is seeing how your students, both former and present, mature. I have had the pleasure of watching Ana mature from when she was a sophomore in my AP Euro class to this year as a senior in my Government class. Some characteristics that have remained consistent with Ana would be her good nature, nice personality and her academic strengths. These attributes are indicators of Ana’s Growth & Pride.” Tracy Costa, AP European History and Government Teacher, Golden Valley High School

“I enjoyed having Ana in AP US History last year. Even though the circumstances of ‘Zoom learning’ were difficult, she always had a great attitude and a great work ethic!” Terri Richmond, APUSH/Psychology Teacher and Social Studies Department Chair, Golden Valley High School