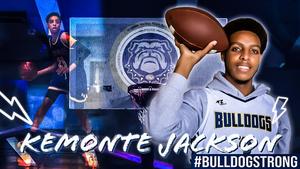 For the GROWTH he has demonstrated as a basketball star since his sophomore year, in the GROWTH he showed as a quarterback on the gridiron, and in his deep commitment to his teammates, Kemonte Jackson is #BulldogSTRONG. Plans After High School: Kemonte wants to play collegiate basketball and hopes to play at UCLA, USC, UNLV, Fresno State, or at home at CSUB.

What Makes Kemonte #BulldogSTRONG: GROWTH. It’s one of the foundational elements of being #BulldogSTRONG at Golden Valley High School and among the behavior expectations of demonstrating GROWTH is to always give 100% and honor your commitments. For GVHS Senior and boys basketball star, Kemonte Jackson, GROWTH has been vital in his journey as a Bulldog wing and forward. As a sophomore, Kemonte earned a roster spot on the varsity team and showed glimpses that the future was bright for the Bulldogs. Despite a 7-17 record, Kemonte was a spark plug for the Bulldogs as he earned 6.7 points per game and 5.2 rebounds per game while having double digit scoring games against West High School, Tehachapi High School, Ridgeview High School, and Independence High School respectively. Throughout the off season, Kemonte remained committed to GROWING as a basketball player and helping to improve the win percentage of the Bulldogs. With Covid impacting the start of his junior season till the Spring, Kemonte gave 100% effort in a shortened season. For his effort, Kemonte earned 13 points per game, 7 rebounds per games, and 2 assists per game as the Bulldogs accumulated a 6-7 overall record in a shortened season along with a 4-2 league record and a first round playoff win against Santa Maria High School, the first playoff win in many years for the Bulldogs. Individually, Kemonte was selected to the BVarsity All Area Honorable Mention. As a Senior, Kemonte hopes to continue to see individual improvement, but is focused on GROWING with his team. “As a senior I hope to be the best teammate I can be and the most coachable,” comments Kemonte humbly,  “As a team I hope we can have a strong connection and have a strong team chemistry. I think we can go far as a team, but we need to play for each other.” #21 Kemonte Jackson brings experience, athleticism, and leadership to the Bulldogs this year and they look to make a deep run in the playoffs.

In addition to the GROWTH and the commitment to his teammates that he displays on the basketball court, Kemonte further showed it on the gridiron of the football field. At Kendrick Elementary School and Ollivier Middle School, Kemonte played QB for the flag football team, but when he enrolled at Golden Valley High School, he decided to focus his energy, growing as a basketball player. However, this year, with many of his basketball teammates also playing football (Markell Brooks, Nicholas Abbott, Rickardo Smart, Marquez Burns) Kemonte decided he too wanted to see if he could help the Bulldogs under the Friday night lights. Starting the season as a backup quarterback, Kemonte was thrust into the starter’s role after an injury to one of his teammates against Porterville High School. Without ever having played a high school snap, Kemonte stepped in and played solid for the Bulldogs, displaying a strong arm and athleticism that we all were accustomed to seeing on the basketball court. For the season, Kemonte threw for 547 yards and 7 touchdowns leaving many to wish that he would’ve come out as a freshman instead of a senior. One of Kemonte’s touchdowns was featured on ESPN’s Sunday Morning NFL Countdown on a segment called You Got Mossed as his teammate Nicholas Abbott went high in the air and snatched one of Kemonte’s passes over a South High defender for the touchdown. As in basketball, football provided an opportunity for Kemonte to grow closer to his teammates. “The most rewarding aspect of playing football is not about building friendships,” quietly states Kemonte, “It's about building lifelong relationships and loyalty with the ones around you that you sweat and toil with each day.” For the GROWTH he has demonstrated as a basketball star since his sophomore year, in the GROWTH he showed as a quarterback on the gridiron, and in his deep commitment to his teammates, Kemonte Jackson is #BulldogSTRONG.

#16 Kemonte Jackson was elevated to the starting QB for the Bulldogs and played solid in his first year, being the best teammate he could be.

What #BulldogSTRONG Means to Kemonte: "To me #BulldogSTRONG means to always show Growth, Pride, and Service. The most important parts of being #BulldogSTRONG are being committed to graduate, overcome obstacles, honor commitments, be a Bulldog, use appropriate language, make positive contributions, the list goes on and on.  Overall, #BulldogSTRONG means that we should walk away from Golden Valley High School being better people.”

#16 Kemonte Jackson was featured on ESPN's Sunday Morning NFL Countdown with teammate #12 Nicholas Abbott in the segment You Got Mossed!

What Teachers and Staff Think of Kemonte:

“Having coached Kemonte since his sophomore year I can say it has been an absolute pleasure to watch his development both on and off the basketball court. As a coach you love to have an athlete that takes the STUDENT aspect of student-athlete as seriously as the athlete. Kemonte has flourished in his role as a Senior leader on the 2021 boys basketball team and the program will rely heavily on him to help us be successful. Kemonte has a bright future after his career at Golden Valley and we all look forward to what's to come after high school.” Jayson Heard, Head Varsity Boys Basketball Coach, Golden Valley High School

“Kemonte is a Great kid that I wish I had the opportunity to have back for another season. He always showed up and worked hard for us and was respectful to his teammates and coaches. He was the perfect example of WE over me. His calm, cool demeanor helped him play well as he was named our starting QB this season.  Always coachable and always working to get better. Excited to watch him compete on the court this basketball season. He has a bright future.” James Cain, Head Varsity Football Coach and Campus Security Guard, Golden Valley High School

“What an awesome young man. It has been my pleasure to watch Kemonte grow as a person and as an athlete. From being a starter on the Boys varsity basketball team to this year playing football for the first time, his work ethic makes him one of the best athletes on this campus. If you didn't get a chance to watch him on the football field, take the time to see him on the court this year you won't be disappointed.” Robert Haskell, Athletic Director, Golden Valley High School

“Kemonte is a perfect example of being #BulldogSTRONG.  He is always willing to help others and ask for help without feeling overwhelmed in Spanish class.  He strives to grow every day in a language that is not his first.  He motivates and is the reason why some of my Spanish Speakers speak and stay focused  with his constant questions and checks for understanding.  He is a wonderful human being and a great athlete.  Kemonte, keep being YOU!” Eva Perez, Spanish Teacher, Golden Valley High School

"Everyday Kemonte displays the utmost respect in his classroom and is an example for other students to follow. He is the true example of being #BulldogSTRONG.” Terry Tripp, Art Teacher, Golden Valley High School