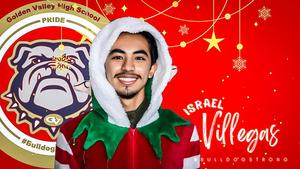 For the GROWTH, determination, courage, and optimism he has exhibited through medical complications, as a Valley Champion Tennis Player, and as a student in the Project Lead the Way program and in the PRIDE he has in representing GVHS, Israel Villegas is #BulldogSTRONG.

What Makes Israel #BulldogSTRONG: For many elementary and middle school students across the country, thoughts of attending high school are filled with success and participation in athletics, cheering at rallies, getting dressed up for Prom, and what outfit they might wear on their first day of school. Before becoming a Bulldog, Golden Valley High School Senior Israel “Izzy” Villegas had similar thoughts, but in order for him to take part in some of those quintessential high school experiences, he would have to overcome a major health obstacle. Born with an artery on the right side of his heart, Israel was limited in his ability to participate in sports or push himself physically because of the impact of exercise on this vital organ. Israel wanted a normal high school experience and wanted to play sports, but doctors indicated that the only way that it could happen is if he would get open heart surgery, moving  the artery from the right side to the left. With courage, a resilient attitude, and the knowledge that recovery would take weeks, Israel would get the surgery and recover in time to try out for the Bulldog Tennis team in the Spring of his sophomore year. Two years later, as a Senior leader, Israel has established himself as one of the staples of the tennis team, highlighted with an amazing junior year. Last year, Israel was an integral part of a #BulldogSTRONG team that won the CIF Central Section Division 5 Valley Championship - the first ever in tennis at Golden Valley High School. For his part, Israel was inserted at #5 in singles and played #2 doubles, going undefeated in both until he lost in doubles in the Valley Championship match. Israel approaches each day with grit and appreciation for the opportunity to compete on the tennis courts. “Israel Villegas is always positive -- a can-do attitude that infects others,” comments Head Coach Fred Kumpel, “He has a vibrant way of living every minute of his day.” While on the courts, Israel also takes genuine PRIDE in being a Bulldog and representing GVHS.  “The most rewarding aspect of playing tennis at Golden Valley is being able to represent the school that I am in,” humbly comments Israel, “Last year we were able to win the first-ever tennis championship for Golden Valley and I thought that was pretty cool.”

Israel "Izzy" Villegas was a vital part of the Bulldogs Tennis program that won the school's first every CIF Central Section Valley Championship in Spring 2021.

Beyond the success he has experienced on the courts, Israel has been academically exceptional in the classroom. Through his journey as a Bulldog, Israel has earned a 4.169 GPA while being enrolled primarily in GATE, Honors, College Prep, and Advanced Placement classes. As a gifted and natural talent in the field of mathematics, science, and engineering, Israel is enrolled in AP Statistics, AP Calculus AB, AP Physics, and has been a four year student in the prestigious Project Lead the Way (PLTW) program that prepares students for careers in engineering. Israel has aspirations of attending the University of California, Berkeley or California Polytechnic State University, San Luis Obsispo to study mechanical engineering to hopefully one day work at NASA. Israel’s passion to study the complexities in engineering has been fostered by his most influential teacher, Judiah Hopkins. “By far the most influential teacher for me at Golden Valley is Mr. Hopkins,” graciously comments Israel, “I am personally a fan of how he explains complex concepts and the way he makes learning fun. I also appreciate the fact that he supports my curiosity by answering all of my questions no matter how ridiculous they may be.” Israel has enjoyed his Senior year, from participating in the Senior Sunrise, to dressing up for the holidays, to simply enjoying the experiences of a normal high school student. For the GROWTH, determination, courage, and optimism he has exhibited through medical complications, as a Valley Champion Tennis Player, and as a student in the Project Lead the Way program and in the PRIDE he has in representing GVHS, Israel Villegas is #BulldogSTRONG. Israel Villegas is always filled with an optimistic attitude and appreciation for everything he participates in at GVHS.

What Teachers and Staff Think of Israel:

“Israel Villegas is always positive -- a can-do attitude that infects others. He has a vibrant way of living every minute of his day -- just saying hello to him when you first see him on any day makes the day better.  He really is happy to see you when you greet him and he conveys this happy energy. He really likes to see others succeed -- makes the tennis team better and keeps the experience positive. Finally, he teaches with his exemplary energy -- as if he is just telling me to look around and enjoy this beautiful day and this beautiful life -- that keeps things in perspective. Always a nice reminder.” Fred Kumpel, Varsity Boys Tennis Coach, Golden Valley High School

“It has been an absolute honor to work with Israel over the last 4 years in the PLTW program, math, and physics courses.  He never ceases to amaze me in his intelligence, resourcefulness, creativity, and kindness.  He frustrates me to no end being able to solve a Rubik's Cube in seconds.  COVID did not stop Israel from learning how to code Python where he created a ringtone for a phone.  He helps tutor his peers in his AP classes.  He is also a Valley Champion in Tennis.  I could not be more proud of this amazing young man. He truly deserves the Bulldog Spotlight.” Judiah Hopkins, PLTW Teacher and eSports Coach, Golden Valley High School

“As a student in my World History class, Israel was always insightful and engaged.  He is bright and articulate, but with a quiet demeanor.  He is always positive and upbeat, and a pleasure to be around.  He leads by example and is also a valuable member of the Boys Varsity Tennis team.” Ed Crosby, World History Teacher and Varsity Girls Tennis Coach, Golden Valley High School

“Israel is a leader in both AP Calculus and the Math Club. His intellectual curiosity is amazing! His strong desire to learn is evidenced through the great questions he asks in class! He is a living testimony of Growth, Pride, and Service!” Luis Jauregui, Mathematics Teacher, Golden Valley High School

“Israel is an exceptional student. He is bright and a hard worker. I look forward to reading the work he turns in because I know it will be well written and contain insightful and meaningful dialogue. I am fortunate to have Israel in my class and I can’t wait to have him for another semester in government!” Cameron Hertzog, Government and Economics Teacher, Golden Valley High School