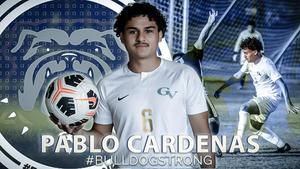 For the incredible PRIDE he has in playing as the primary defender and backbone of the Golden Valley Soccer program and in the gratitude he has towards the staff that have mentored him in his journey as a Bulldog, Pablo Cardenas is #BulldogSTRONG.

Plans After High School: Pablo would like to attend California State University, Bakersfield and study to work in agricultural business or become an architect. He would also like to try and play soccer at CSUB or possibly another university that would give him a chance.

What Makes Pablo #BulldogSTRONG: Throughout the history of soccer there have been many strikers that have left their imprint on the game, creating iconic legacies along the way. From Pele’ to Ronaldo (Brazil) to Messi to Diego Maradona to Ferenc Puskas to Gerd Muller to Romario to Christano Ronaldo, these sensational strikers have ascended to a status in the game reserved for gods because of their ability put the ball in the back of the net. Despite such accolades given to individual offensive players, it is the presence of solid defenders that truly make a soccer team successful. Defenders are the backbone of a team, possessing the grit needed to do whatever it takes to prevent the other team from scoring. They usually hang back, protecting the goalie from breakaways and serving as options for midfielders in the defensive half. For the Golden Valley High School Boys Soccer team, Senior Captain Pablo Cardenas is the backbone as one of the primary defenders for the Bulldogs. Since he was a youngster at Valle Verde Elementary School, Pablo has had a passion for soccer as he spent most of his recess time kicking a ball around with his friends. When he turned 12 years old, Pablo joined the elite Bakersfield United club team where he sharpened his skills so that when he stepped foot on the campus of GVHS, he was on the JV team, elevating to Varsity during his sophomore year. As a junior, Pablo established himself as one of the primary defenders in Kern County as he was selected to play in the Central Section All Star Game as well as to the BVarsity All Area 2nd Team. This year, Pablo has been an integral part of a GVHS squad that has a 7-4-1 overall record, playing some of the toughest opponents that the CIF Central and Southern Sections have to offer. For Pablo, he has aspirations when it comes to playoffs. “From a team standpoint I hope to get what I always wanted coming in as a freshman,” passionately states Pablo, “That’s to win league and to hopefully win a Valley Ring in Division 1.” From an individual standpoint, Pablo wants to duplicate what he did as a junior, but wants to be remembered for more. “I hope to be recognized for being one of the most hardworking and passionate players on the pitch,” Pablo humbly comments. #6 Pablo Cardenas is the backbone of the GVHS Boys Soccer program with his ability to play tough defense and prevent opponents from scoring.

With the success that Pablo has experienced on the pitch, he is quick to recognize those staff members that have helped him in his journey at GVHS. Pablo appreciates his coaches, Coach Dominic Othart and Coach Marshall Garcia as two individuals that want students and players at GVHS to be successful. “Coach Dom and Coach Garcia are always looking to help us succeed and be better than we were the day before,” graciously comments Pablo, “They understand that we are going to make mistakes, but they never scream at us, rather they support us and teach us how to improve our game.” Pablo also appreciates the support of his teachers such as his Mrs. Daina Kiesel who was invested in knowing how he performed at his games. “I would always tell Mrs. Kiesel about my games and she was always the person I could talk to when I would have a bad game and she would help me get over it - it was a great environment in her class.” Suffice to say, Pablo has enjoyed his experience as a student and soccer player at Golden Valley. “My experience at this school has been great because I have been around incredible students, staff, and teammates,” states Pablo, “I have always had a good time at GVHS and am so happy that I will be graduating as a Bulldog.” For the incredible PRIDE he has in playing as the primary defender and backbone of the Golden Valley Soccer program and in the gratitude he has towards the staff that have mentored him in his journey as a Bulldog, Pablo Cardenas is #BulldogSTRONG.

#6 Pablo Cardenas is the ultimate team player and does whatever it takes to help his team including taking corner kicks on set pieces.

What #BulldogSTRONG Means to Pablo: "#BulldogSTRONG to me means that you’re the best person you can be. Not just in school, but wherever you're at - you’re always improving to be a successful person in your life.”

What Teachers and Staff Think of Pablo:

“Pablo shows great leadership as a 3 year varsity returner and captain.  He not only communicates well with his teammates and keeps the team positive and determined, but he also shows them by his actions on and off the field.” Dominic Othart, Head Varsity Boys Soccer Coach, Golden Valley High School

“Pablo Cárdenas is a driven , strong and confident young man . Pablo is #BulldogSTRONG in terms of his commitment in the classroom. He has always been able to balance soccer and grades well for the past 3 years that I have known him. He is #bulldogSTRONG because he makes everyone feel like they are family and he shows commitment to his teammates and his grades.” Marshall Garcia, World History Teacher, Assistant Boys Soccer Coach, LISTOS Adviser, THRIVE Adviser, Golden Valley High School

“Pablo is so much fun to watch on the Soccer field. His coach might position as a defender, but he is not afraid to move forward and take shots on goal. He is a team leader that controls the game with his ability to move the ball around and find open players. I look forward to seeing Pablo play at the next level next year.” Robert Haskell, Athletic Director, Golden Valley High School

“Pablo has been a leader in and out of the field since he was a freshman. He is a very humble student who always works hard for the benefit of the team. He is one of the most respectful players I had the honor to coach. Undoubtedly, Pablo is #BulldogSTRONG!” Jose Solorzano, Athletics and Equipment Manager, Golden Valley High School

“Pablo Cardenas possesses a maturity and humility that serve as exemplary characteristics to his teammates. Pablo’s selfless approach to the game of soccer is evident with his commitment to playing focused and determined defense - a sometimes thankless job, but is crucial to the success of our team. He is coachable, communicates well with others, and ultimately cares about being an asset to help the team rather than focusing on individual accomplishments or glory. It is truly an honor to have Pablo Cardenas as a Bulldog at Golden Valley High School - he is #BulldogSTRONG.” Kyle Wylie, Assistant Principal of Administration, Golden Valley High School