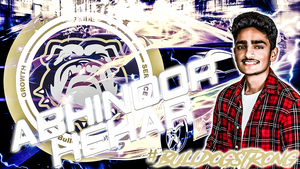 For the love and appreciation he has for the sacrifices his family made so that he can have opportunities and in the academic success he has experienced on his way to a 4.5 GPA, Abhinoor Hehar is #BulldogSTRONG.

Plans After High School: Abhinoor will be attending California Polytechnic University, San Luis Obispot to pursue a degree in mechanical engineering so that he can one day work for a luxury automotive or robotics company.

What Makes Abhinoor #BulldogSTRONG: Psychologists indicate that motivation is the desire to act in service of a goal as it is the crucial element in attaining individual objectives. Furthermore, motivation is one of the driving forces behind human behavior as it encompasses the desire to continue striving toward meaning, purpose, and a life worth living. For Golden Valley High School Senior Abhinoor Hehar, motivation is found in his family. Abhinoor was born and spent many of his formative years being raised in a small village in India and the only hope for a career was in agriculture. However, his parents wanted more opportunities for Abhinoor and his brother and took the risk of moving to the United States.  Through their journey to the United States and specifically to Bakersfield, his parents faced many challenges that he simply could not imagine going through. With new opportunities and a future up to Abhinoor’s choosing, he has been motivated to bring honor to the sacrifice that his parents made so that he can be successful. “After hearing many of their (parents) stories, I realized that no obstacle is too hard to overcome and it has motivated me to push forward no matter what,” Abhinoor humbly states, “I want to make them feel proud, I want them to understand that all their effort and sacrifice will not be short-lived. I am motivated to one day repay all of what they did for me and my brother and I will not give up until I have.”

Abhinoor Hehar takes PRIDE in his Indian culture and for the sacrifices that his parents made so that he can be successful.

Fueled with purpose and motivation to honor his family, Abhinoor has been extremely successful as a Bulldog in a number of different realms on campus. Academically, Abhinoor has been exceptional on his way to earning a 4.5 GPA with straight A’s while being enrolled in GATE, Honors, Advanced Placement (AP), and Project Lead the Way courses. Abhinoor credits the support of his teachers for his success, in particular his AP English Language and Composition teacher, Karen Bastain, and AP Calculus Teacher, Luis Jauregui. “During my time in these classes, I never felt unsupported as both of them showed me and my peers how much they care about our success,” graciously comments Abhinoor, “Although their classes have been quite challenging at times, they always encouraged me to persevere and never give up in the face of challenges.” In addition to his academic success, Abhinoor has also experienced athletic success at Golden Valley High School as he was a vital part of the Bulldogs Boys Tennis program in 2021 that captured the school’s first ever CIF Central Section Valley Championship in tennis from his position as #3 singles’ player. Abhinoor has also been an active club member in the Math Club, GATE Club, and Cubing Club. For his part, Abhinoor has left behind an incredible legacy at Golden Valley High School. “When people hear the name Abhinoor Hehar I want them to think of the kid who would never settle for anything below an A,” states Abhinoor, “I want my teachers to remember the times when I bugged them over small percentage grading errors or mistakes that I could correct. In general, however, I just wanted to be remembered as a good student who worked hard and was kind to others.” For the love and appreciation he has for the sacrifices his family made so that he can have opportunities and in the academic success he has experienced on his way to a 4.5 GPA, Abhinoor Hehar is #BulldogSTRONG. Abhinoor Hehar (Left of Plaque) was a vital part of the 2021 Bulldogs Boys Tennis Valley Championship Team. This was the first championship in Golden Valley's history.

What #BulldogSTRONG Means to Abhinoor: "To me, being #BulldogSTRONG means being someone that others can look up to both inside and outside of the classroom. It also means doing whatever is right even when no one is looking or if there is no award given. In general, #BulldogSTRONG means never settling for the bare minimum and always striving to make the community a better place one way or another. ”

What Teachers and Staff Think of Abhinoor:

“While Abhinoor (AV) was a student in my AP Language and Composition class during distance learning last year, he was incredibly consistent. He managed his time well, met deadlines, and produced work that reflected thoughtful effort and insight. AV would take advantage of Support Time after school to share his work and receive feedback about how to improve it and better meet the expectations of the assignment. With each assignment I was able to see how AV was applying the feedback he received in order to grow academically. This sort of engagement and proactive attitude toward learning will serve him well as he goes on to study at Cal Poly in the fall. I wish him the best of luck. He embodies many characteristics of what it means to be #BulldogSTRONG that will help him continue to succeed.” Karen Bastain, AP English Language Composition and English Teacher, Golden Valley High School

“Abhinoor is one of the most dedicated, intelligent, and friendly students I have.  Over the last four years, Abhinoor has led his fellow classmates in PLTW, math, and science.  Through the pandemic he would help his peers with their programming and in mathematics.  It is always amazing to watch him solve a Rubik’s Cube in under a minute.  This year he designed and built towers, bridges, 3D printed Goku, and programmed a cell phone ring.  Through all of his hard work, he has been accepted for Mechanical Engineering at CalPoly SLO – an amazing accomplishment.” Judiah Hopkins, Physics and Project Lead the Way Teacher, Golden Valley High School

“Abhinoor is a great all-around student-athlete. I couldn't ask more from one of our students in the classroom or on the tennis court. Abhinoor was a big part of our Valley Championship team last year along with keeping 4.5 gpa in the classroom. It was fun to watch him grow as a tennis player these past four years. I expect big things from him in the future.” Robert Haskell, Athletic Director, Golden Valley High School

“Abhinoor is one of the most driven and dedicated students I have met in my career. He takes pride in his academics and faces adversity in the classroom with a growth mindset – he knows that he can accomplish anything he sets his mind to.” Victoria Hinojosa, Counselor 10th-12th (H-L), Golden Valley High School

“Abhinoor is a hard working student that will always go above and beyond in all his work.  He excels in the classroom, and he has a strong desire to be successful in life. He is a great example of what it means to be #BulldogStrong.” Rebecca Bledsoe Santaella, English Teacher, Golden Valley High School

“Abhinoor Hehar is an excellent example of what it means to be a student who is #BulldogSTRONG. In class he shows growth by always giving 100% and giving his best effort in all of his courses. Moreover, Abhinoor shows pride through always being on-time and ready to learn and by making good choices as a learner to prepare himself for life in college. Additionally, he shows service by being a team player who is often found collaborating with his peers as they help one another master difficult AP coursework. Abhinoor has a bright future ahead of him in the college and career world and he will for sure continue to be #BulldogSTRONG as he moves on with life beyond High School.” John Hansen, Government/Economics Teacher & We The People Coach, Golden Valley High School

“Abhinoor is a super dedicated young man! He constantly aims for perfection! He is a true hard worker! For these reasons, Abhinoor is #BulldogSTRONG!” Luis Jauregui, AP Calculus Teacher, Golden Valley High School