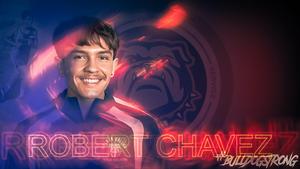 For the incredible GROWTH he has experienced through participation in THRIVE and in Cross Country, Robert Chavez has developed into a confident, inspirational leader at GVHS that is #BulldogSTRONG. Plans After High School: Robert plans to attend a UC or CSU with intentions of studying music, specifically in the realms vocal performance as well as music composition and production.

What Makes Robert #BulldogSTRONG: A foundational element of being #BulldogSTRONG on the campus of Golden Valley High School is a student’s ability to show GROWTH on a consistent basis. Growth is like success as both look different for each person. While success has an actual definition (the accomplishment of an aim or purpose), growth is not directly defined. It can mean personal development, self-help, self-growth, self-improvement. Whenever students seek to better themselves in any way – be it in athletics, academics, or individual maturity, they are seeking and experiencing the value of growth. Growth is all about improvement. One student that has experienced tremendous growth as a student at GVHS is Senior Robert Chavez. For Robert, his high school experience started with a stressful transition as he started at GVHS as a sophomore after transferring from Frazier Mountain High School, and in the midst of distance learning due to Covid-19. “Initially, I was very insecure and shy when I first transferred to Golden Valley and had no friends,” Robert humbly comments, “However, I involved myself in clubs, sports, and some of the school’s incredible programs and because of my involvement, I was able to meet some incredible people.” One of the first groups that Robert joined was THRIVE, a peer support group that was created during distance learning as a way to connect students that were feeling the ill effects of isolation and loneliness due to the pandemic. “THRIVE aided me immensely when I first started here at Golden Valley,” indicates Robert, “THRIVE was that safe space I needed to talk about what I was going through to others, and it was where I made my first friends here at Golden Valley.” As a result of THRIVE, Robert was able to experience the safe and welcoming environment that GVHS staff and students try to create for others. Additionally, Robert was also encouraged by some of the THRIVE Leaders such as Jayden Reyes Sarmiento, Juan Duran, and Gerardo Bernal to participate in cross country. Through the peer support group THRIVE, Robert Chavez was able to meet his first friends at GVHS and start to demonstrate GROWTH as a Bulldog.

Initially, Robert was a little hesitant to run cross country because he felt he was too slow and coupled with some of his shy behavior and insecurities, he didn’t know if he could be effective as a runner on the GVHS cross country team. Despite some of his early self doubt and physical hardships, Robert committed himself to cross country with a consistency and belief in himself that he could be successful. “Committing to cross-country was the saving grace of my high school career,” Robert graciously states, “It helped me become a responsible, hardworking leader. My greatest joy, accomplishments, and memories came from my determination to keep going the extra mile.” Throughout the duration of his high school career, Robert has shown tremendous growth as a runner as he moved from someone that ran 3 miles in twenty minutes, to someone who consistently runs the same distance in the 17 minute range including a personal record this past November of 17.18 at the South Yosemite Horizon League Championships. Additionally, in a race against Arvin, Robert was able to claim the top spot on the Bulldogs team, a goal he had long set out to do at the beginning of the season. Moreover, for his effort, determination, inspiration, and can-do attitude, Robert was designated as the team captain this year, further demonstrating that growth can lead to incredible achievement. “I absolutely accomplished what I wanted to in cross-country,” indicates Robert,  “I would never have thought I'd be able to push myself as much as I have, but with the encouragement of my coaches, friends, and teammates, I've gone beyond what I thought was possible for myself.” For the incredible GROWTH he has experienced through participation in THRIVE and in Cross Country, Robert Chavez has developed into a confident, inspirational leader at GVHS that is #BulldogSTRONG. Robert Chavez moved from a shy sophomore, to a confident leader and captain for the GVHS Cross Country program as a Senior.

What #BulldogSTRONG Means to Robert: “To be #BulldogSTRONG means to make decisions that I know will lead me to success. At the end of the day, everyone can only truly be responsible for their own futures. The choice is yours to make.”

What Teachers and Staff Think of Robert:

“Robert Chavez is #bulldogSTRONG because he does not let obstacles stand in his way. He had to overcome challenges before joining GVHS which made him stronger. Fortunately for us, these challenges resulted in Robert becoming a Bulldog. During cross country, I witnessed Robert’s hard work and dedication. He is one of the most improved runners I have ever coached. Robert is a student who does not give up and has proven he will accomplish every goal he sets for himself despite any adversities that come his way.” Manuel Sanchez, Librarian and Former Cross Country Coach, Golden Valley High School

“Robert shows growth and pride in the way he is always prepared for every choir rehearsal, and great service through his continuing leadership and positive example in the choir. He always has a kind word for everyone, and is always dependable for helping out behind the scenes at events.” Samantha Williams, Choir Director, Golden Valley High School

“Robert is a super dedicated and respectful student! He tends to be one of the first students to arrive at class. He is very responsible. His level of engagement and participation is admirable. For these reasons, Robert is #BulldogSTRONG!” Luis Jauregui, Mathematics Teacher, Golden Valley High School

“Robert walks into class briskly as if he just heard a good joke. He’s always positive and has a great rapport with the other students. You can tell Robert is a true leader the way others look up to him. I’m thankful to have his bright energy, his smile, and his mature work ethic in my class. Robert is definitely the epitome of #BulldogStrong!” David Lollar, English Teacher, Golden Valley High School

“Robert has been an amazing person and student in my class. He is one of the nicest students I have ever met. Friendly with a positive attitude. He enjoys helping his peers in my class. One of the people I can rely on when I need a question answered in class. All of this makes him #bulldogstrong. I am glad that he is in my class.” Fernando Ruiz, Social Studies Teacher, Golden Valley High School