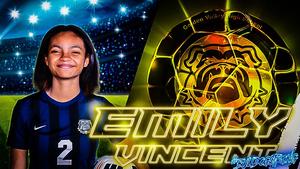 For her continuous optimism and inspirational story of GROWTH after tearing her ACL two years ago, Emily Vincent is #BulldogSTRONG on and off the soccer pitch. Plans After High School: Emily is still undecided on her specific plan after high school, however, she does want to attend a junior college or four year university.

What Makes Emily #BulldogSTRONG: There are some dates that forever alter the direction of a person’s life and thus become a defining moment in their journey. For Golden Valley High School Senior Emily Vincent, February 28, 2020 would become a defining date and moment for her life, forcing her to value the essence of GROWTH. On that dreadful February day in 2020, Emily was playing striker for her soccer club team Runners United in a tournament in Arizona and as she was trying to regain possession of the ball from a defender, her left knee went in one direction and her body went in the other resulting in a torn ACL in her left knee further leaving Emily devastated because she knew that the road to recovery would be long and treacherous. Furthermore, Emily had to wait 6-7 months to even get surgery and when she finally did, she was told by doctors that she would need to wait another 12 months undergoing physical rehabilitation before she would be medically cleared to play again. In short, Emily missed her entire sophomore and junior season at GVHS playing the sport she loved the most, but tried to remain positive in the process. “My whole life has been about soccer and I loved it,” explains Emily, “Once I tore my ACL, I had to find other joys in life, so that I could eventually get back to the sport I loved the most.”  On November 28, 2022 Emily took the pitch against Delano High School for the first time in over two years and was overcome with mixed emotions as she was anxious, nervous, and timid about being back on the field. “It was weird being back on the field,” explains Emily, “However, after a few moments, I was able to settle down and play the game I loved.” In true Hollywood fashion, Emily scored the Lady Bulldogs only goal in a close loss to the Tigers 2-1, but her play seemed to inspire her teammates. In the Lady Bulldogs third game of the year against Shafter High School, Emily would score her second goal of the season, but due to team needs, Emily has played primarily defense the last few games because of her athleticism and ability to shut down the other team’s best strikers. “Emily is one of the most versatile players I have ever coached,” comments Lady Bulldogs Head Coach, Sandra Tirado, “I can count on Emily to play anywhere I need her always with a positive attitude. She is a great example of what I look for in a student athlete, Emily walks #BulldogSTRONG.”

Emily Vincent #2 (Center Back Row) is back on the pitch for the Lady Bulldogs Soccer Team and has helped them to some early season success such as a 1st Place finish in the Silver Division at the Mira Monte Tournament.

Before Emily came back to the pitch this winter, her first time participating in athletics since her knee injury was part of the Lady Bulldogs Volleyball team where she played on the right side and occasionally in the middle. Beyond the success that the Lady Bulldogs experienced this past season with a  23-6-1 (4-2) record and first round defeat of Bakersfield High School in the CIF Central, Emily was just happy to be playing sports again. “Honestly, what I hoped the most for volleyball was to just have fun and enjoy being part of a team again,” humbly comments Emily, “I accomplished just that.” She also accomplished being recognized on the Honorable Mention team for the South Yosemite Horizon League. However, Emily does not want to be purely defined by being an athlete. She wants to be recognized as an optimistic individual that appreciates life to the fullest and for her senior year, she wants to take in every moment of being a Bulldog at Golden Valley High School. “I am still trying to figure out my interests outside of sports,” comments Emily, “When writing about me, just make it known that sports is not everything to me. I just enjoy going to Golden Valley and having fun during my Senior year of high school. I am excited to see what my future holds.” For her continuous optimism and inspirational story of GROWTH after tearing her ACL two years ago, Emily Vincent is #BulldogSTRONG on and off the soccer pitch. Emily Vincent's first athletic competition after ACL surgery was on the volleyball court where she brought athleticism and lots of spikes such as the one above against BHS in the playoffs.

What #BulldogSTRONG Means to Emily: “#BulldogSTRONG means GROWTH the most to me. I’ve grown a lot through the year due to unfortunate events and even though stuff happened, I continued with the thinking of trying to succeed with my full potential and not giving up. Along the way I’ve had a bunch of fun and wouldn’t have it any other way.”

What Teachers and Staff Think of Emily:

“It has been great to watch Emily's comeback from her injury last year. She was a big part of the success our Volleyball team had this year and is also proving to be a leader on our Girls' Soccer team. Even though she was busy with all of the practices and games she also made time to be the water girl for our football team. She is one of the student/athletes here on campus that bleeds Blue and Gold. She just wants to be part of the change and shows it by her dedication to whatever she is doing.” Robert Haskell Athletic Director, Golden Valley High School

“Emily has been involved with our volleyball program all through her four years at Golden Valley; unfortunately, she was injured and was unable to compete in sports for a long period of time. She came back this year as a senior and earned a starting position on our Varsity Volleyball team and earned All-League- Honorable Mention. That shows you her great work ethic and Positive attitude; she is an outstanding person, student, and athlete. We expect huge things from Emily in the future.” Bill Richardson, PE Department Chair and Head Volleyball Coach, Golden Valley High School

“Emily Vincent is a great student and athlete; she shows pride and growth by always stepping up for the challenge and being willing to always go the extra mile for her peers. Emily does not let obstacles stand in her way she overcomes any challenges thrown her way and has proved that by recently recovering from a tough Acl injury and coming back stronger and continuing to strive with her leadership and willingness to set and meet every goal she puts her mind to. She is one of the most versatile players I have ever coached. I can count on Emily to play anywhere I need her always with a positive attitude. She is a great example of what I look for in a student athlete, Emily walks bulldog strong.” Sandra Tirado, Attendance Clerk and Head Varsity Girls Soccer Coach, Golden Valley High School

“Emily Vincent probably has one of the most contagious personalities at this school. She has a positive attitude and looks on the bright side in any circumstance. She is like many other students on campus the epitome of a #bulldogSTRONG student athlete. Her attendance and attention to detail is on point; she demonstrates great character on and off the field; and she also keeps her GPA up. It is a pleasure to have coached and taught her here at GVHS. Emily is #bulldogSTRONG.” Marshall Garcia, Social Studies Teacher and Varsity Soccer Coach, Golden Valley High School

“Emily is an amazing student. Although she may be quiet and reserved in class sometimes she is a thoughtful and innovative student. These qualities make her a great student to have in class. She is always willing to help out a fellow student and give her best on her assignments. I am sure she will succeed at anything she tries.” Cameron Hertzog, Social Studies Teacher, Golden Valley High School