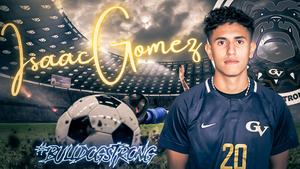 For the stellar play and leadership that he exhibited on the soccer pitch for the Bulldogs and in his exceptional and exemplary work ethic in the classroom, Isaac Gomez is #BulldogSTRONG. Plans After High School: Isaac wants to attend a four year college or university to continue to play soccer and more importantly to further his education in Sports Medicine with aspirations of becoming an athletic trainer or physical therapist.

What Makes Isaac #BulldogSTRONG: As students across the nation returned to full in person instruction for the 2021-2022 school year, high school campuses were faced with numerous challenges as students were readjusting to academic life beyond Zoom. Longing for a sense of normalcy, many campuses were waiting for that glimmer of hope that Covid-19 was behind them and that those traditional, enjoyable, and memorable high school experiences were back. For the Winter Sports season, GVHS was able to reclaim some of that hope as the Boys Basketball program captured its first ever CIF Central Section Basketball title and junior Naomi Roby finished in 4th place at the CIF State Wrestling Tournament. Flying under the radar, but still leaving an important impact on the campus of GVHS, Boys Soccer made a deep run in the playoffs as they finished 18-5-1 while also being crowned South Yosemite League champions and falling just short of a CIF Central Section Division II title where they lost 2-0 to a tough Redwood team. Emerging for the Bulldogs on their historic run was junior attacking midfielder Isaac Gomez who established himself as one of the premiere players in the Central Section. On a team full of star players, Isaac led the Bulldogs with 9 goals and was second in assists (5) and total points scored (23). However, it seemed that Isaac seemed to score his goals at the most important times for the Bulldogs whether it be at the prestigious Lindsay Tournament or in a quarterfinal playoff game against Pioneer Valley High School. As a result of his stellar play, Isaac was selected to the 1st Team All South Yosemite League and 2nd Team BVarsity All Area Team. #20 Isaac Gomez emerged as superstar for the Bulldogs as a junior earning 1st Team All SYL Honors as well as BVarsity 2nd Team All Area.

As Senior and captain this year, Isaac is passionate about duplicating the success he experienced as a junior. Already with 9 goals, 3 assists, and 21 points, Isaac is on pace to shatter the marks he set last year as he aspirations of being the South Yosemite Horizon League MVP and earn a spot on the BVarsity All Area 1st Team. However, beyond the individual accolades that he is seeking to accomplish, Isaac remains committed to being the best teammate he can be. As a central attacking midfielder, Isaac enjoys being more involved in the game because it allows him to distribute to his teammates so that they can shine.  “My role on the team is being one of the three captains of the team which holds high responsibility,” humbly comments Isaac, “Coach Othart and Coach Garcia expect a lot from their captains. They hold us accountable and let us know how we can fix our mistakes, so that we can be better leaders. It is a huge honor to be given the role.” In addition to his stellar play and leadership on the soccer pitch, Isaac has demonstrated those same qualities in the classroom where he has earned a 3.788 GPA while being enrolled in College Prep classes as well as at the Career Technical Education Center (CTEC) where he is taking courses in Sports Medicine so that he can one day be an athletic trainer or a physical therapist. According to Isaac his experience at GVHS has been a great one. “Everyone I've come across has been nice and very respectable, which shows a great deal of character,” Isaac states graciously, “All the teachers I know are very involved and show that they care about our education, as they are willing to help us students with our needs.” For the stellar play and leadership that he exhibited on the soccer pitch for the Bulldogs and in his exceptional and exemplary work ethic in the classroom, Isaac Gomez is #BulldogSTRONG.

#20 Isaac Gomez shined at the Lindsay Tournament for the Bulldogs last year.

What #BulldogSTRONG Means to Isaac: "#BulldogSTRONG to me, means that I have to lead by example. Looking at my situation with being not only captain of the soccer team, but also being an older brother of two younger brothers, it means that I have to do my best each and everyday for my team as well as my siblings. By doing my best, my team will want to do their best and will want to play for each other, in the same way as I want to play for them. Also, by doing my best, my brothers will recognize what I am doing and will want to apply it to themselves, whether in how hard I work in training or even how much I study to get good grades. That is why #BulldogSTRONG means that as a person I have to lead by example, and anyone else can do that too. ”

What Teachers and Staff Think of Isaac:

"Isaac Gomez is an outstanding student athlete.  Of the field he has been a great captain and an exceptional player who plays at the top level 100% of the time.  His skills, knowledge, and vision of the game is at the next level.  As a captain he has the respect of his teammates and always keeps them ready, engaged, and pumped up while staying grounded to our standards.  Off the field he is a great example of what it is to be a bulldogSTRONG athlete.  He excels in the classroom, makes time to help with every community service event, and respects all around him.” Dominic Othart, Head Boys Soccer Coach, Golden Valley High School

“I have known Isaac for over 5 years and what a mature caring young man he has become. Isaac Gomez is #bulldogSTRONG not only for his commitment to soccer and school but he embodies what it is to be a good citizen. He cares for his peers and shows compassion outside of his friend or soccer group. He is the definition of a humanitarian. Isaac is an amazing soccer player as well, he is getting looked at by a couple of schools and is hoping to get a scholarship to play at a 4 year university. Some of these schools include San Jose State, Cal State Bakersfield, San Diego State and UCLA. On top of how important soccer is for him in the future, Isaac understands that there is a responsibility to keep grades up and that’s why he maintains his honor roll status as a student athlete. Isaac is #BulldogSTRONG, very proud of him and what he has accomplished as a Bulldog!!” Marshall Garcia, Social Studies Teacher, Assistant Soccer Coach, and LISTOS Coordinator, Golden Valley High School

"Isaac is one student athlete who despite his young age shows a lot of maturity. He is a natural leader that is always helping his teammates to become better. He is a respectful, humble, and friendly young man."  Jose Solorzano, Equipment Manager, Golden Valley High School

“It’s been a pleasure getting to know Isaac this school year. I appreciate that he comes prepared to class, does his assignments and works well with his classmates. Isaac also has a good sense of humor, exquisite fashion sense and a great passion for soccer.” Tracy Costa, Social Studies Teacher, Golden Valley High School

“Isaac is a great student.  He gets his work done and he is quiet.  I know he’s involved in ROC and Soccer which makes him really well rounded.  I can remember the first project we did in class was tying bows-lots of bows—which is not easy.  He stuck with it and got the project done which was #BULLDOGSTRONG.” Katy Nieblas, Floral Design Teacher, Golden Valley High School